June 6 at the Information and Educational and Exhibition Center of the Kaluga Museum of Fine Arts will open a photo exhibition "Floating City" Kaluga photographer Dmitry Nartub. 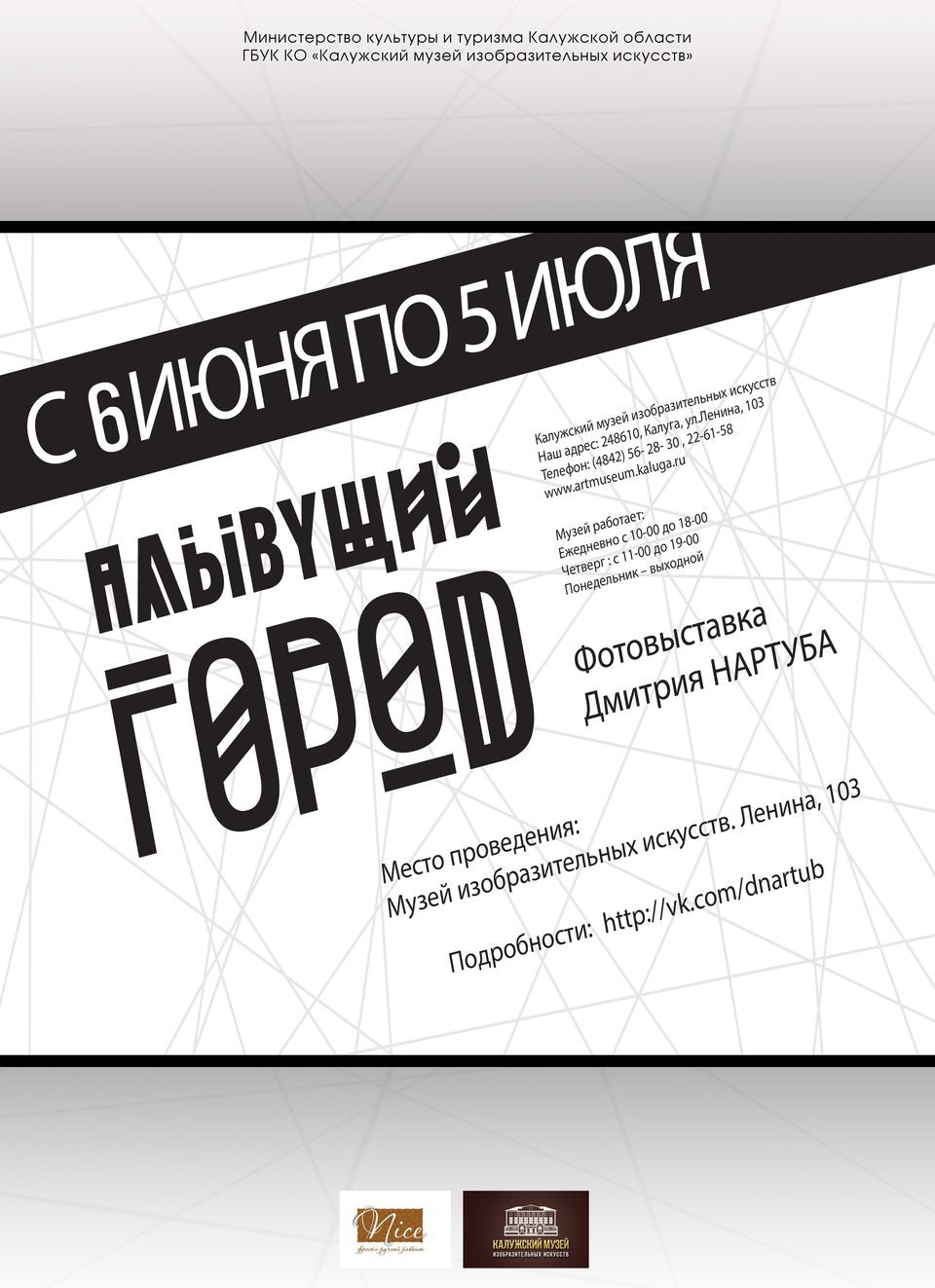 Dmitry Nartub is an extraordinary, creatively versatile personality, a young, dynamically developing photographer. He was born in Yuzhno-Sakhalinsk on January 18, 1982. He lived in Chegdomyn, Khabarovsk Territory for 17 years, then in 1999 he entered the Moscow State Technical University named after Bauman and since then constantly lives in the city of Kaluga.

Since 2002, became interested in poetry. He was a member of the Natalie Pushkin Society, published in several literary almanas, spent a number of poetic evenings in the Khabarovsk Territory, received an invitation to join the Union of Russian Writers in the Kaluga District, but refused the offer and devoted himself to photography.

Since 2008, professionally engaged in photography. In addition to commercial photography, he actively seeks himself in various creative genres, but gives preference to reporting and documentary genres, considering them to be the main indicator in assessing the skill of the photographer. He is one of the organizers of the project "Photo Language", aimed at the development of creative photography. Within the framework of the project, he held a personal exhibition “From the life of matches”.

The photo exhibition “The Floating City” is an unusual exhibition, a kind of art report that reflects a different reality of our everyday life and enables the Kaluzhans and guests of the city to get acquainted with another new direction in the work of the photographer Dmitry Nartub.

The photographer himself says the following about his creative project: “These photographs are about a city that, in its rhythm of life, sweeps past us, eroding each and every one, not highlighting anyone specifically from those who make it up. I just captured the moment. The viewer is given the opportunity to think through what he saw.

Becoming a really good photographer is hard. It is important to develop your view of the world, internal aesthetics. You must be able to take pictures without a camera - to see the frame mentally and mentally evaluate the moment or object from all angles. One must always be on the lookout, not so much for a frame or perspective as for oneself. ”

The main technical technique that was used when shooting a series of these photographs was handheld shooting, manual control of the shutter speed (Blurb mode) with the maximum aperture closed and minimum ISO. Also, during the opening of the shutter, the zoom ring of the lens and the movement of the camera were used. That is how the various effects of blurring and blurring were achieved. Post-processing of photographs consisted only in translating the image into black and white and a slight sharpening.

Monday is the day off. The last Friday of the month is a sanitary day.