On the Small Stage of the Army Theater, the premiere is the play “The Main Role”. Directed by Igor Afanasyev, the family ups and downs, embroiled in stifling maternal love, are presented with humor and irony.

Do you think you are an adult independent man, the head of the family, respected by colleagues and friends? Your mother will show who is in charge of the family! There is enough room for everyone in this fun theatrical carousel: wife, husband, mother-in-law, even the cheerful ambulance doctor. The life of the family flashes before the eyes of the viewer, either turning back into the past to the dance floor in the distant "seventies", then crashing into the present with its difficulties in relationships at all costs.

The main role in the play is played by the national artist of Russia Olga Bogdanova, who, with the outward pathos and selfishness of the heroine, very subtly and skillfully conveys all the emotional pain and fear of loneliness inherent in aging parents. “The main role” is a comedy about a woman with character and charisma - she longs to live, loves her adult son with all her might, loves so much that she completely tormented him. This story has a lot of soul: it is about a whole generation of women endowed with character, talent, beauty and left out of work due to age. These women spend all their energy on loved ones, which relatives are not always happy with, ”says Olga Bogdanova.

When did this strange metamorphosis happen - like the clever and beautiful Polina (Olga Bogdanova), did the strong young beautiful woman turn into a squabble, selfish old woman? Why is she stuck in the “triangle” of false love, concern for her son and sacrifice? What has her son Sergei (Timur Eremeev) been trying to prove to her all his life? And how will the daughter-in-law Yekaterina (Olga Gerasimova) get out of this ball?

Precisely chosen scene design, a special musical score of the light, talented play of the actors, and now, the classic conflict of three generations - elderly parents, adult children, grandchildren - turns into a fascinating action, a real theater holiday. The performance will include acrobatic stunts, Latin American dances and, of course, music.

Igor Afanasyev, Honored Art Worker of Ukraine, director of the play “The Main Role”, emphasized: “The Army Theater again and again demonstrates endless possibilities to create performances in all theatrical genres that currently exist. It remains only to wish the viewer a pleasant aftertaste from this witty musical comedy. ” 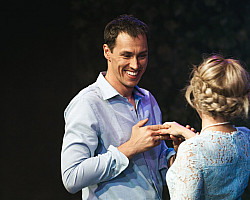 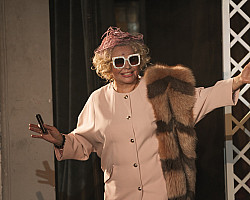