A small, but significant, jubilee exhibition of the Honored Artist of the Russian Federation, First Vice-President and Academician of the Russian Academy of Arts Viktor Grigorievich Kalinin "Indikt" is symbolically timed to the beginning of autumn - the time that is marked in the Orthodox Church calendar by the celebration of the New Summer from the Creation of the world ("Indikta" or " New Years "). Since September 14 (September 1, old style), Orthodox Christians have been asking God for a blessing in the coming year. It is important that this holiday marks a new beginning of the liturgy. It is prayer, as a key part of church worship, that becomes a support in the search for the gift of the Sacrament. Pavel Florensky wrote: “But this word is a word of prayer, a prayer formula or some equivalent of it. Only through the word does the action become a sacred act, a number of external processes become a rite, the explicit one becomes a Sacrament: the everyday is hidden in a secret by the word. This word may sometimes not be pronounced aloud, but it is certainly implied, tacitly assumed, thought in external action; and without a word, manifested in one way or another, the external action remains wordless, not intelligent - only empirical, only part-time, only sensual.The word raises his grief. And then this word, as it is said, is prayer. " 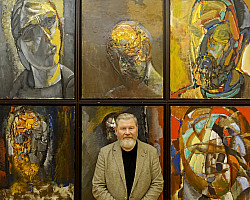 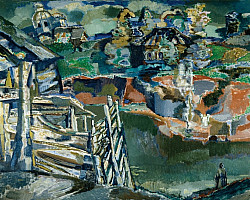 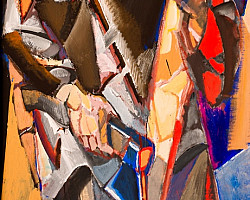 The liturgical tradition was gradually enriched with hymns, statutory recitation and its own special readings - paremias, apostolic and evangelical readings, which are an integral part of the beginning of the Indict. Cautiously and, at the same time, quite confidently, we can say that the artist reaches for the focus of prayer, makes his way by means of painting and the properties of the picture to the essence and "topos" of the spoken, sounding, living word. Appearing as if here and now from color, tone and line, figurative images embody either the joy and delight of the manifested Sacrament, or the aching fear of the heart felt during the prayer appeal. The figurative imagery of Viktor Kalinin’s painting, perhaps, should be called "the dramaturgy of tangible anticipation." This tangible anticipation is characteristic of the iconography of temple icons. Dramatic art, thrill of quest and very personal,a keen perception of the co-presence of the visible and the invisible, not only in the liturgy, but also in everyday life, brings an expressive, in places abstract, shimmering language of painting, transferring the viewer from obvious and obvious observation to the Mystery of tangible anticipation.

Some of the works presented at the exhibition were previously donated by the artist of the Russian Academy of Arts. Now the collection of the Russian Academy of Arts will also include new works by Viktor Kalinin: "Mother" (2005), "Selo Zalesovo" (1997), "Father" (2010), presented in the exhibition in the form of a triptych and serving as a kind of evidence of the memory of the place of birth and the expression of that silent gratitude to the parents, which, over time, only becomes more.

The material is based on an article by Alexander Salenkov.