On March 11, 2016 at 11.00 a master class of academician K.V. Khudyakov is planned. On the same day at 15.00 a press conference will be held (press screening) with the participation of the author and the organizers of the exhibition, at 16.00 - Opening Day.

The Art of Deep Immersion is a project whose purpose is to show some digital technologies in contemporary art. Stereo-light panels and high-resolution digital paintings introduce and immerse the viewer into the world of new virtuality.

In the domestic art community of authors working with digital projections, sound art, using multi-touch monitors and preserving the plastic value of the works, there are not so many. In this situation, Konstantin Khudyakov seems to be the undisputed leader of the Russian high-tech art - inexhaustible in the search for the latest technical solutions, sparing no effort in mastering the most advanced programs and equipment to date. With each next project, he reveals previously unexplored opportunities for creating artistic images of the era of network intelligence, while remaining the principal follower of art, professing an academic school equally as a necessary foundation, plastic virtues, innovation and relevance.

The exhibition in Maykop presents the work of Konstantin Khudyakov created in the period from 2005 to 2015. These are works from different cycles: “The Anticipation / Deisis”, “Eye of the Angel”, “The New Russian Font”, the large cycle “Hotel Russia”, conceived by the author as an artistic double of the world in which we live: its essence, flesh and spirit, dramatic stories and no less dramatic reality. Projects that arose at the crossroads of two millennia continue to this day: the artist prefers not to stop, adding, concretizing and generalizing what he, as a person and artist, reflects in the world around him. The works combined his architectural experience, painting and digital technologies, keen interest in socially acute and historiosophical topics.

For Khudyakov, the possibility of designing from the particular to the general, from the textures and meanings of individual objects and objects to a specific human fate and a global understanding of the country’s time and history events is fundamentally important. It is no accident that his main projects are implemented in the parameters of architectural thinking, which also implies the identification of systemic connections between events and phenomena, between different types of art at the turn of the 20th and 21st centuries, striving for syncretic unity. In Khudyakov, an architect and an exhibitionist, photographer and painter are inextricably linked. The interspecific boundaries of art have no meaning for him; the “new imagery” realized by the multivariate language of digital art comes to the fore.

As part of the exhibition project, digital paintings on canvas and stereo-light panels are presented. The artist considers the use of stereo-light technology as a truly innovative media in visual art, which allows to give compositions (created in 3-DMax, Cinema-4-D, etc.) fundamentally new expressive qualities: spatial, light, dynamic and volume effects that are not comparable in their effect to any other means. Technically, Khudyakov’s stereo mirror consists of a light panel, a unique package with an image synthesized from 220 files, a translucent mirror (MirrorView Glass) and a vertically-lens plastic. (Stereo technologist Alexei Goryaev).

The interactive installation “Chess Apocalypse” is a unique fragment from the multi-level project Art Multitouch, created jointly with the VITAMIN group from Perm. The idea of ​​an art game is based on the unpredictability of modern history in general and each subsequent day of mankind, in particular. Here, the algorithm and logic of the traditional intellectual duel are destroyed. Making a move, a chess piece is randomly transformed and changes its hypostasis. With each new move, the situation on the board changes dramatically, and players lose control of the game every minute, becoming hostages of the cosmos of numbers. Chess Apocalypse is a metaphor for the relationship between a person and history, reality and virtuality: a virtual world entirely constructed from numbers.

In addition, the exhibition presents numerous animated fragments from Art Multitouch and a film about the artist’s work on the large-scale project “DEISIS / Anticipation”, which was once shown at the State Tretyakov Gallery.

Born in 1945 in with. Tsarevshchina of the Saratov region. He graduated from the Moscow Architectural Institute in 1971. According to the distribution of the Moscow Architectural Institute, for ten years he worked as the main artist in the Central Museum of V.I. Lenin in Moscow. By the end of the 1990s, he completely switched to digital art. Today, Konstantin Vasilyevich Khudyakov - vice president, full member and member of the Presidium of the Russian Academy of Arts, head of the Volga branch of the Russian Academy of Arts, president of the Creative Union of Artists, professor of Moscow State Art Academy S. G. Stroganova, Honored Artist of Russia, working in the genre of digital art technology. 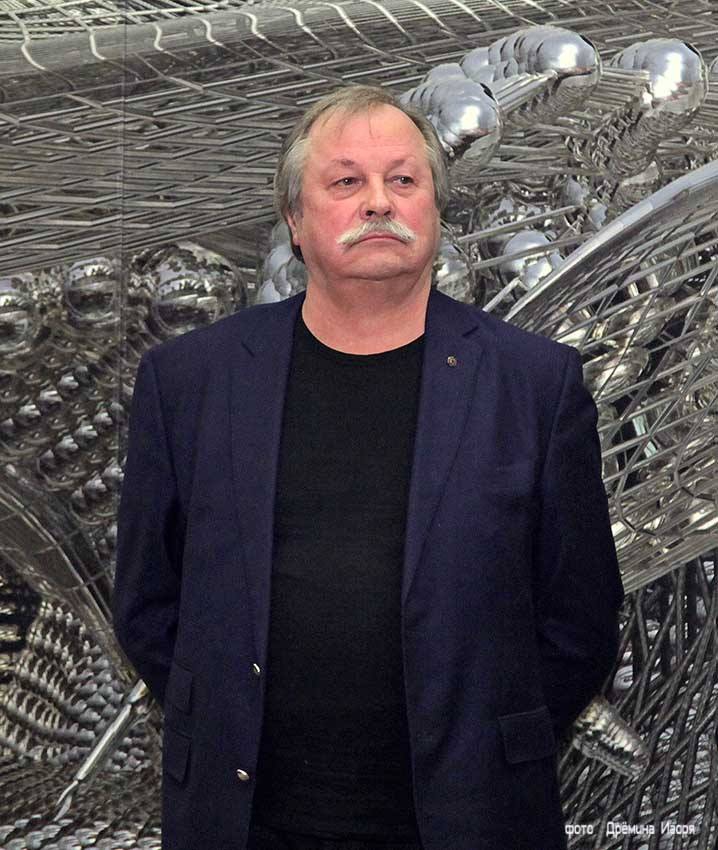 Khudyakov is a leader in the Russian art of high technology, an artist who is in search of the latest technical trends, mastering the most advanced programs and equipment. Member of the Moscow and Venice Biennale of Contemporary Art, as well as numerous museum exhibitions in Russia and abroad. His works are stored in many famous museums of the world, including the State Tretyakov Gallery, the State Russian Museum, the Moscow Museum of Modern Art, the State Center for Contemporary Art, the MARS Center for Contemporary Art, as well as in the art museums of Saratov, Pskov, Perm, Ivanovo, Tula, Kaliningrad, Ulyanovsk, Ufa, Kostroma, Tolyatti, in the museums of modern art of Vienna and Bratislava.

The exhibition is open to the public during the opening hours of the North Caucasus branch of the State Museum of the East from March 11 to the end of April 2016.