"Oh, Durer!" Exhibition dedicated to the 550th anniversary of the birth of the great artist

An exhibition of rare books from the library of the Irkutsk Art Museum "Oh, Durer, my pestun, oh painter-magician!", Dedicated to the 550th anniversary of the great German artist Albrecht Durer (1471– 1528). The exhibition for the first time presents books with the immortal creations of Dürer, published in 1894, 1927 and 1929 in Berlin. 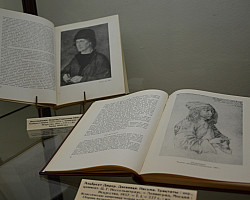 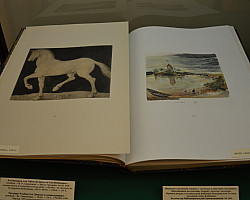 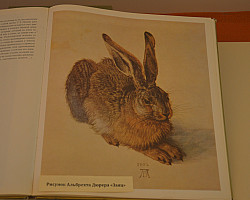 In the center of the exposition there are 3 volumes of a seven-volume edition, large-format books, dressed in exquisite one-piece bindings of blue fabric with gold and colorful embossing. Each of them is an invaluable gallery of the master’s immortal works. The most valuable book in the exhibition - "Drawings by Albrecht Durer in reproductions" (1894) - was published specifically for bibliophiles in a circulation of only 300 copies, each of which is numbered. The album from the museum collection has number 262 - this book monument of federal significance is printed on specially made laid paper of the Dutch factory Hendrik van Gelder, which has a watermark - the coat of arms and the name of the factory. The 1929 album has a three-sided gold edge. The exhibition also introduces the publications of prominent domestic and foreign scientists who have studied the life and work of A. Durer.

German painter and graphic artist of the late 15th - early 16th centuries. Albrecht Durer was born in Nuremberg in the family of a Hungarian jeweler. He is recognized as the largest European master of woodcuts, who raised it to the level of real art. Prominent scientist who contributed to architecture, mechanics, geometry and art. The first art theorist among northern European artists, author of a practical guide for artists in German. The founder of comparative anthropometry. The first European artist to write an autobiography and create a series of self-portraits from youth to adulthood.

The most famous paintings and engravings of the artist: "Melancholy", "Adam and Eve", "Four Horsemen of the Apocalypse" and others. Durer’s works on animals are widely known: rhinoceros, lion, hare, cat, monkeys, dogs, etc.