The sharp associativity of the images, expressiveness and complexity of color, line, texture distinguish the work of Moscow artists - G. Serov and N. Testina. Their pictorial experience is based on the traditions of the Russian and European avant-garde of the twentieth century.

G. Serov is one of the leading abstract artists in contemporary Russian art. In the space of his large expressive canvases, color and shape pulsate, conflict, living their complex "cosmic" life.

The artist was born in 1953. He graduated with honors from the Ryazan Art College, in 1982 - Moscow State Academic Art Institute. V.I. Surikova (workshop of the academician of the Russian Academy of Arts T. T. Salakhov). Since 1983 - Member of the Moscow Union of Artists. Active participant in Russian and foreign exhibitions. His works are in museums in Russia and private collections in many countries. He was awarded the silver medal of the Russian Academy of Arts.

The powerful color energy of G. Serov’s large canvases is always a dominant feature in the exposition space of art exhibitions. In his works that are pointless and full of philosophical thought (“Martian Landscape”, “Milky Way”, “Rhythms of Galaxies”, “Formula of the Universe”, etc.), the artist allows the viewer to plunge into the cosmogonic infinity of the world.

Images-signs, images-symbols in his dynamic monumental works ("Predators", "Aquarium") only enhance the feeling of the scale of the plan, allow you to visually convey the energy and dramaticness of life. His canvases “In the open field of cornflowers”, “Free space”, “Sea wind” attract the viewer’s eyes with their color intensity, compositional intrigue and associativity.

“The imagery of the artistic dimensions of Gennady Serov is built as a single matrix by strip stairs, circles, ovals. It weaves, multiplies, turning into a complex organic fabric… Powerful in its energy “visual evidence” of Gennady Serov is immersed in the depths of the image, in its layering phenomenon. It goes into the intellectualization of staring, densifying the spatial layers, as if reflecting on the borderline states of the spirit and visual sensory experiences, everyday poetry and the miraculous phenomenon, permeating them with time and history, ”writes art critic V. Patsyukov.

Natalia Testina appears at the exhibition as a bright, constantly searching painter. In 1985, she graduated from Moscow State Art Institute named after V.I. Surikova (workshop of the academician of the Russian Academy of Arts T. T. Salakhov). Since the same year - a member of the Union of Artists. Member of Russian and foreign exhibitions, including in Japan, Canada, Germany. The artist’s works are in the State Tretyakov Gallery and other Russian museums, as well as in private collections in many countries.

N. Testina deliberately destroys space, creating a shaky, intricate game of shapes and color spots, from which lines, points, circles and spirals emerge. The search for your own plastic (rather than plot) topic is the content of her paintings ("Fun games in the garden", "Eruption", "Cosmic watercolor"). 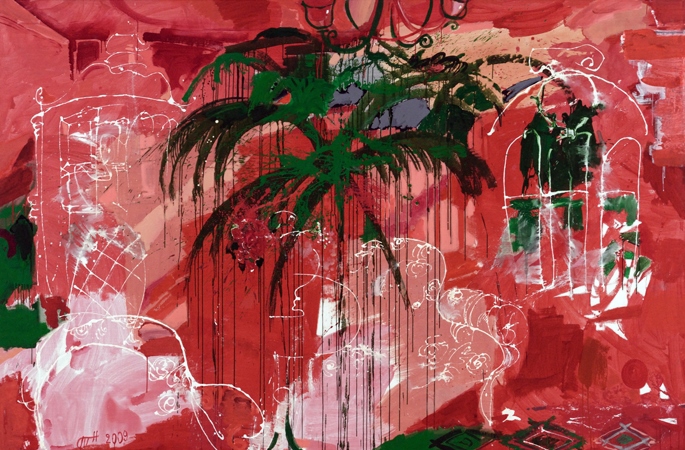 Fun games in the garden

The art of Testina is born as an alloy of figurative and abstraction, chamber and monumental, speculative and sensual. The subject world, images of everyday life, the artist’s look transforms into metaphors of being.

The plastic fantasies of N. Testina are full of inner tension, sharp decorativeness, while the color palette of even her large-scale canvases is delicate, inspired, often performed in a light tone.

Landscapes by N. Testina (“The Sound of the Surf”, “The Enchanted Forest”, “Summer Wind”) are perceived as unexpected color improvisations. One of the favorite genres is the interior. In her paintings, the interior is a holistic environment, emotionally saturated, where the silhouette of the subject finds a plastic response in the silhouette of the spot, and the ease of impression does not contradict unconditional completeness. 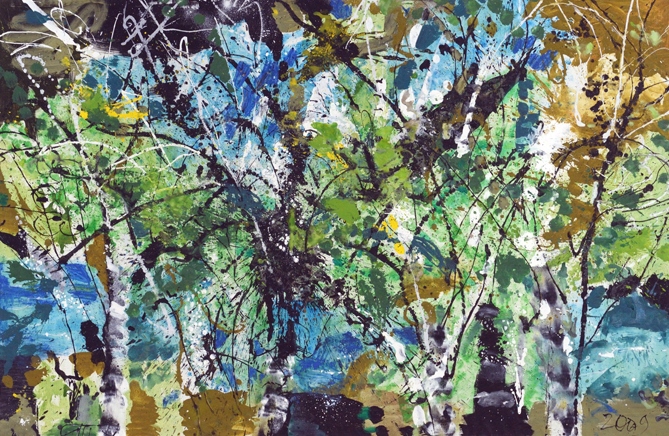 According to art critic V. Patsyukov, “the plots of Natalya Testina’s paintings are outwardly simple and obvious, but their dramaturgy is always accompanied by a mystery:… everything lives in a magical process, the denouement has just come, and reality is in a phase of“ anticipation ”. Its imagery, as in the composition "Summer Wind", is born of the elusiveness of the transition, in an emotional impulse, in the energy of natural elements, confronting the natural life of creative matter with a deeply personal experience. "

An exhibition of the works of G. Serov and N. Testina reveals the bright personality of each author, the eccentricity of their creative thinking and worldview.