"War and Peace". Exhibition of works by Alexander Bystrov and students

At the junction of two significant dates for the history of our Fatherland - the 75th anniversary of the Great Victory and the 80th anniversary of the beginning of the Great Patriotic War, military themes have become one of the main topics for historians, politicians, scientists, cultural figures and, of course, artists for whom the tragedy Wars on its global scale, the importance and fragility of the World, are extremely urgent problems in our difficult and tense world.

During these solemn anniversaries, which make one think about the eternal questions of life, the theme of war became the main one for a group of young artists from St. Petersburg who prepared an exhibition project with the conceptual title "War and Peace". The idea of ​​four participants in this project - graduates of the St. Ilya Repin at the Russian Academy of Arts - Roman Abdullin, Chermen Gugkaev, Marat Kesaev and Sergei Nekrasov, with personal participation in this exhibition decided to support the head of the workshop of monumental painting, professor of the St. Petersburg Academy of Arts named after Ilya Repin, artistic director of the mosaic workshop of the Russian Academy of Arts in St. Petersburg Alexander Bystrov. 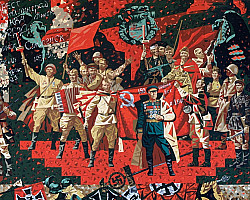 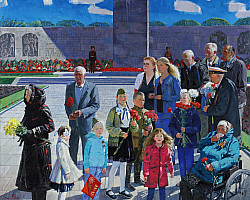 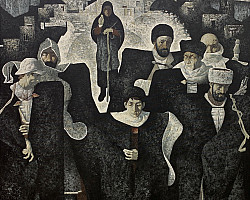 The young authors and their leader were united by a common goal - to show the attitude of modern creators to the topic of war, as a huge tragedy on a human scale, bearing pain from loss, the memory of which is preserved to this day in almost every family in our country. “War for the peoples is tears and blood,… lost youth and offended old age,” wrote Ilya Ehrenburg, and this is exactly what the exhibition participants want to remind viewers of. But life is not limited to the tragic theme, and even in moments of difficult trials, it is common for a person to rejoice, love, and be happy. Therefore, in contrast to the theme of war, in the works of the participants of the project "War and Peace" there are works that glorify the polyphony of peaceful life with its life-affirming principle.

A.K. Bystrov has been teaching for many decades, strives to develop in his students all the qualities inherent in the difficult profession of a monumentalist, that is, the ability to work with a large-scale composition, solve synthetic problems, coordinate numerous particular details, subordinating them to a general idea, combine flashiness and even sometimes the posterity of the language of monumental art with subtle psychologism and historical accuracy. He teaches his wards to influence the viewer through the power of the emotional expression of painting and the expressiveness of pictorial techniques. It forms in students taste, patriotic feelings and historicism of thinking, without which work in solving large problems is unthinkable. The life of generations continues in the canvases of young artists, the life of art continues in the traditions of the School,the life of the teacher continues in the labors of the students.

The participants of the project, the leitmotif of which is: "War and Peace in the history of our Fatherland through the eyes of young artists", are, despite their age, already serious painters, professional craftsmen. All of them are members of the Union of Artists of Russia, permanent participants in Russian and international exhibitions, have been repeatedly awarded with diplomas and awards of various degrees and levels. Undoubtedly, they have ahead of them further creative development, inspired work and continued faithful service to their Motherland.