"Near the Christmas tree in the New Year"

On the eve of New Year and Christmas holidays, the State Museum-Estate "Ostafyevo" - "Russian Parnassus" opens an exhibition of New Year tree decorations "Near the New Year tree". About 250 exhibits will tell about how the New Year was celebrated in the Soviet years and what historical events were the reason for the release of one or another series of New Year’s toys.

The custom of decorating a Christmas tree in Russia arose at the beginning of the 19th century. The first glass Christmas tree decorations were brought to our country from Germany. The change of eras in the 20th century was reflected in the Christmas tree decorations. In the 1920s and 1930s, the symbols of the Soviet state appeared on them. These were balls with a hammer and sickle, airships with the inscription USSR - they also symbolized the era of aeronautics. 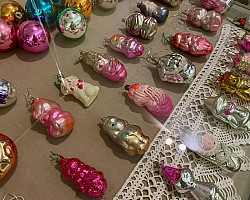 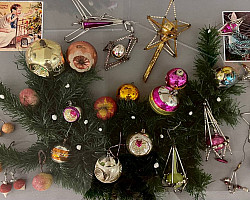 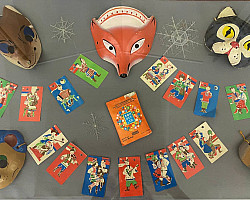 The cardboard Christmas tree decorations presented at the exhibition were made using the Dresden cardboard technique, which appeared at the turn of the 19th and 20th centuries. In our country, after 1920, cardboard Christmas tree decorations were made in private workshops and consisted of two pieces of cardboard glued together with a slight bulge in the form of a pattern. They were covered with foil, silver or colored, and then painted with a spray gun with powder paints. As a rule, the figurines depicted animals, fish, butterflies, birds, cars, ships, fairy-tale characters, stars, etc. Cardboard Christmas tree decorations "Dresden Cartonage" were produced in the USSR until the 1980s. And from Bohemia we received assembly toys made by assembling glass tubes and beads using wire. Mounted toys in the form of pendants, parachutes, airplanes, stars.In the late 1930s, the development of the North was marked by the release of toys in the form of polar explorers.

During the Great Patriotic War, the production of Christmas tree decorations was reduced. To decorate the New Year tree, improvised means were used - shoulder straps, bandages, flasks, etc. After the war, the production of New Year’s decorations began to recover - in the late 1940s, toys appeared in the form of household items: teapots, samovars, table lamps. They are distinguished by their fluidity of form and hand-painted with bright colors. For the 150th anniversary of Alexander Sergeevich Pushkin, a series of toys based on the tales of the great poet was released. The most popular toy from this series is the Old Man with a Seine. With the release of the film Carnival Night in 1956, the Clock toys were released, with hands set at 5 minutes before midnight. And the theme of musical instruments in the 1940s and 1960s was reflected in decorations in the form of mandolins, drums and violins.In the 1950s, toys were also made from light bulbs to save money. They were distinguished by handicraft and bright colors.

With the development of astronautics, Yuri Gagarin’s flight into space, in the 1960s, a series of toys "Cosmonauts" was produced. Toys in the form of fruits and berries (grapes, raspberries, strawberries) were made after the Great Patriotic War. And in the sixties, during the reign of Khrushchev, agricultural toys prevailed: eggplants, tomatoes, zucchini, beans, peas and - corn, cobs of all sizes and colors. Also, the animal world around us is reflected in the Christmas tree decorations - the squirrels, bears, and bunnies released in the 1950s and 1960s gave the New Year tree a special charm. Good old decorations in the form of cones and snow-covered huts from the 1950s-80s are in every home. The variety of colors and shapes and the shiny white top give them a unique charm.

Christmas decorations made of papier-mâché were made until the middle of the 20th century (papier-mâché is a paper pulp mixed with glue, plaster or chalk and covered with berthollet’s salt for shine and density). Basically, the figurines depicted people, animals, birds, mushrooms, fruits and vegetables.

Santa Clauses made of papier-mâché and cotton wool in the 1940s-1960s were stand figures for the Christmas tree assortment. They are called pedestal because they were fixed on a wooden stand and installed under the tree. Since the late 1960s, with the development of the production of plastics and rubber in the USSR, stand figures were made from these materials in a wider range. The Snow Maidens and Snowmen have joined the Santa Clauses.

All the New Year decorations presented at the exhibition belong to the Soviet period and were provided by the collector, a friend of the museum, Olga Alexandrovna Ryabtseva, who collects and restores toys made in the USSR in 1930-1980.