The exhibition "ACTORS SAMOILOVA. EVERYTHING BEGINS IN KAZAN ..."

The St. Petersburg State Museum of Theatrical and Musical Art presents the exhibition “Actors Samoilovs. It all started in Kazan… ". The main person of this project is the personality of Vasily Vasilievich Samoilov (1813–1887), who belonged to the second generation of the Samoilov’s acting dynasty, the most prominent representative of the family, whose life and career began in Kazan. 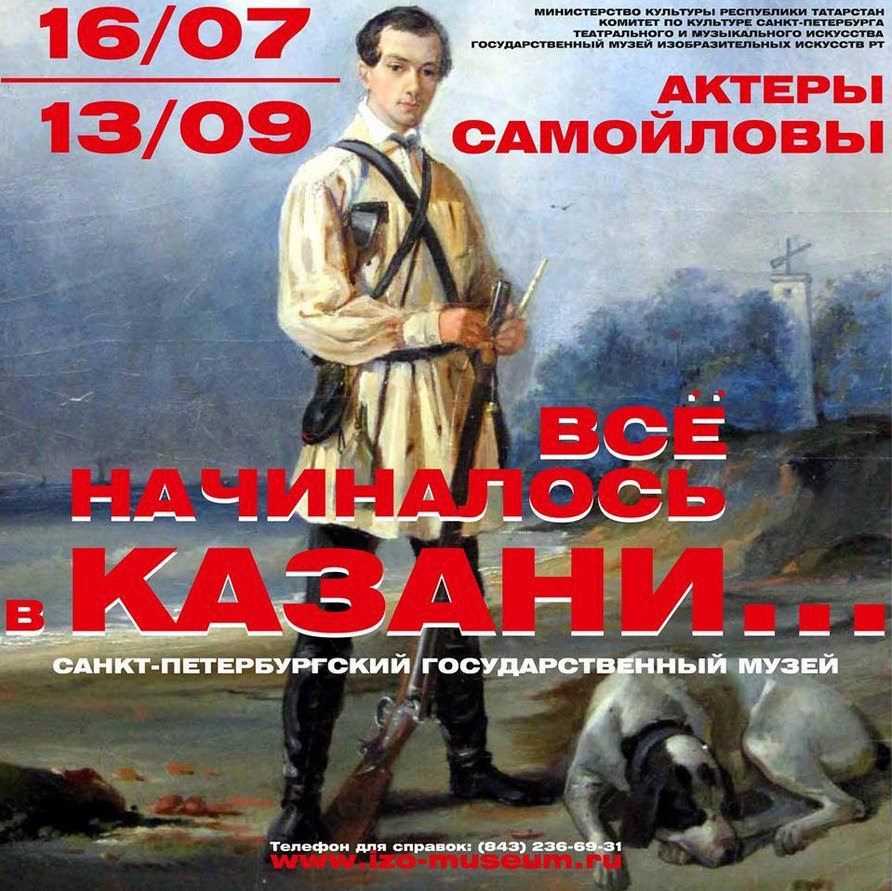 The history of the Russian theater is traced in the history of the Samoilov dynasty, the brilliance of the stage is reflected, the intricacies of the fate of actors are recreated, whose own life is usually in the shadow of images created by the audience’s favorites. One and a half centuries of the Samoilov actors’ activity on the theatrical stages of Moscow, St. Petersburg, Kazan, and other cities of the country, the most interesting everyday life of three generations is revealed as part of the exhibition at the Pushkin Museum. The collection, consisting of family photos, personal belongings, paintings, graphics, filling the space of the Samoilov memorial museum-apartment, is transferred for a short period of time from the northern capital to Kazan. Something symbolic can be traced in this - the great actor came to visit the city where his creative formation took place. Vasily Vasilievich, son of opera singer Vasily Mikhailovich Samoilov (1782–1839) and artist Sofia Vasilyevna Samoilova-Chernikova (1787–1854), comes to the stage of the Kazan theater due to a combination of circumstances: a graduate of the St. Petersburg Mining Cadet Corps and the Forest Institute, who served in Kazan as part of Ministry of the Sea, admitted impermissible impertinence to higher persons, after which he was forced to resign. Thanks to the petition of his brother Peter, who in those years had already served in the Kazan theater, Vasily was enlisted as an actor in the troupe. So the actor was born, who was destined to triumphantly return to his native Petersburg and shine on the stage of the Alexandrinsky Theater.

Representatives of the third generation of the family became the continuers of family traditions: P.V. Samoilov, V.A. Michurina-Samoilova, whose names are well known to the theater public in the first half of the 20th century. In total, the Samoilov family gave the Russian theater thirteen talented actors.

At the exhibition in the Pushkin Museum of the Republic of Tatarstan, the works of famous graphic artists (V.F. Timm, R.K. Zhukovsky), photographs from the family archive, organically supplemented by paintings and drawings by V.V. Samoilova. Here is a profession and hobby, merged into a single whole, and the reflection of an accidental, interesting to an actor - not just a person, allowing to reveal more clearly the personality, world and environment of the author. Personal things and attributes of theatrical life - a fan, a cigarette case, a box for a cylinder, a makeup box, a cane, binoculars - are companions in life and on the stage for the actor himself and people close to him. In them - a piece of the soul of the protagonist of the exhibition and his family.

In total, the exhibition features more than 100 exhibits.

The exhibition runs through September 30th.

Address of the main building of the Pushkin Museum of Fine Arts: st. Karl Marx, 64.

Monday is a day off.
The last Tuesday of the month is a sanitary day.