On the occasion of the 200th anniversary of the birth of F. M. Dostoevsky, the Kaluga Museum of Fine Arts and the Kaluga Regional Scientific Library named after V. G. Belinsky open the final fourth exhibition of the joint project “Dostoevsky. A Writer’s Diary ". On it, viewers will get acquainted with the novel of the “great five books” “The Idiot” about the “positively beautiful” prince Myshkin. For the exposition, the library provided a publication published in Soviet times and illustrated by the recognized graphic artist Vitaly Goryaev, whose drawings are distinguished by their expressiveness and special attention to the atmosphere of the moment. Also in the window is the valuable July issue of the magazine "Epoch" (1864) by the Dostoevsky brothers, which became the last literary work in the life of Mikhail Dostoevsky, who suddenly died of an aggravated disease in July of the same year. 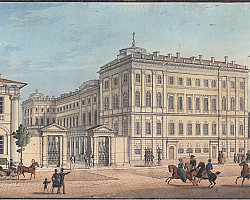 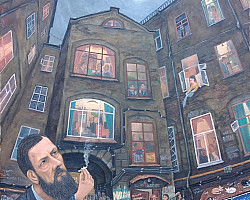 The exhibition features two small engravings from the first half of the 19th century by artists from the workshop of Karl Petrovich Beggrov. One illustrates the Kazan Cathedral in St. Petersburg, to which Dostoevsky always treated with reverence and where he often visited. Another sheet depicts the St. Petersburg Anichkov Palace - the official imperial residence under Alexander III, where Fyodor Mikhailovich met with the future emperor and read him excerpts from the novel The Brothers Karamazov.