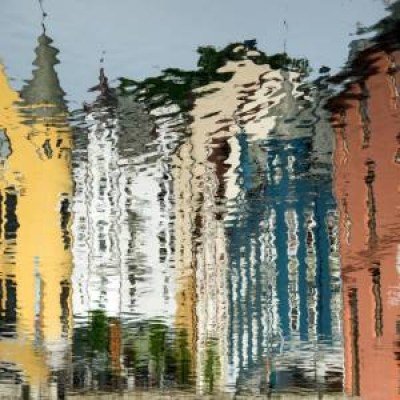 Beyond the bustle of everyday life, we often do not notice the world around us, we rush along the usual routes, trying to catch everything and overtake time. Or maybe it’s worth stopping sometimes and looking around?

In mirrored display cases and office glass, in the smooth surface of ponds you can see another world. Is it just a reflection or a parallel world existing outside of our reality? An attempt to show this “other world” was made by Konstantin Markov in the project “Reflected Reality”. With the help of a camera, the author captured pictures of the reflected world at various points in its existence. If you look closely at these works, a lot of interesting things are revealed. For example, Moscow yard. The photograph shows a reflection of an old Moscow house (built in 1932) in the glass wall of the Academy of Budget and Finance in Maly Zlatoustinsky Lane. Peer at this picture and in the lower left quarter of the work you will see a strange face. Where did he come from? There was once a monastery on the site of the old Moscow house. Moreover, the author repeatedly shot this story at different times of the year and day, and only once in a series of 20 frames did one appear on one of them. So what kind of face is this: mysticism or a greeting from a parallel world…?

Mirror surfaces reflect the world around us: buildings, cars, ships, mountains, clouds. It is these paintings of reflection of the surrounding world that form the basis of the project "Reflected Reality". In his photographs, the author, in addition to the mirror features of the modern metropolis, uses reflections in the aquatic environment.

The aquatic environment is fertile ground for the photographer. The frozen water surface reflects colorful houses and boats, creating a picturesque picture of eternal peace. A light breeze - and the idyll instantly turns into a multi-colored kaleidoscope, which is fixed by the photographer.

Konstantin Vladimirovich Markov - a photographer with more than thirty years of experience, lives and works in Moscow. Diplomat and participant of many Russian and international exhibitions. Associate Professor, Department of Theory and History of Arts, Moscow State Art and Industry Academy S. G. Stroganova, PhD in Law, Vice President of the Creative Union of Russian Artists on Legal Issues, Honorary Academician of the Russian Academy of Arts. The author’s works were exhibited in the Moscow Manege, Central House of Artists, in the exhibition halls of Moscow, cities of Russia, Norway, the Czech Republic, Cuba, the USA, Monaco and other countries.

The exhibition will run until December 3, at the address: st. Lenin, 103.