Konstantin Zmogk (Konstantin Danilov) - one of the first and most famous graffiti artists in Russia, began working in this area since 1997. Painted walls of houses and other objects by him can be found in different cities of the world. Konstantin’s visualization method - a painterly abstraction - is universal and is used by him for both street and chamber work.

Konstantin Zmogk does not turn to politics, does not hype on fried events, in his abstractions he appeals to his own emotions, experiences, to his sensual perception of the world around him, time. The artist is also interested in the psycho-emotional state of society as a whole, since certain social aspects can affect both an individual and human communities. The lyrical works of the author are akin to poetic lyrics. The epigraph contains the word-making poems of Velimir Khlebnikov, in which the word has lost its objectivity and external form. But a tangible image of time emerged, alarming, running, prickly, changing… In this project, in abstract images, the artist also displayed a special time that plunged humanity of the whole world into a borderline state - spring 2020. Interesting,that in addition to the inner relationship between the poet and the artist, there is a certain commonality - both were originally trained in mathematics, both studied at the physics and mathematics departments of universities. 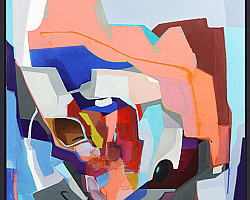 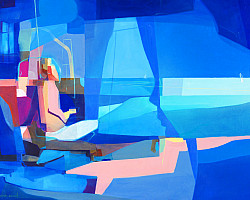 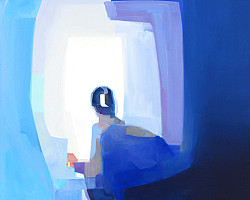 The titles of the paintings: Suddenness, Melancholy, Anxiety, Calmness, Virtuality, Perception, Solitude, Restriction, Argue, Expectation - reflect the author’s experiences, changes of moods and thoughts that visited him in the process of writing the corresponding works. The author reports: “The world fell apart. Together with my family, I spent a month and a half in my apartment and watched the changes in my psycho-emotional state and thoughts, noting my reactions. I observed the behavior of people through the prism of social networks, video conferencing, etc. ”Abstract compositions differ from each other by the combination of colors, shapes, lines, dynamics. The suddenness of the attack of an invisible enemy and the alarming state in the new life conditions are answered by saturated, aggressive shades of red, orange, brown (works "Surprise", "Anxiety"). On the contrary,soft shades of blue, white, green reflect the "Calm" that replaces the panic mood. In the light space of another canvas, there is a small conventional "window" filled with geometric fragments - the quarantine has compressed the world space to the one visible from the window of the apartment ("Restriction"). In the blue-blue composition "Melancholy" you can see a conventional male figure, maybe this is a self-portrait? Interesting!

“I would like,” the author says, “that the viewer, having seen the pictures of the exhibition, think about what his thoughts and actions were during that period, and how they influenced him in the present”. The composition "Waiting" is dedicated to the hope of liberation. In the soft blue-blue field of the canvas, an empty space, into the sparkling whiteness of which the silhouette of a woman rushes, is about to fly out the window and dissolve in a free, beautiful world. In a world where “A flock of light times! You are poyunna and vabna, You drunk your soul like strings, You enter your heart like a wave! Come on, sonorous poyuny, Glory to the light times! " Irina Filatova