Exhibition Larisa Akhmadeeva "Under the sky of St. Petersburg"

The exhibition of paintings and pastels by Larisa Akhmadeeva: “Under the sky of St. Petersburg”, dedicated to the women’s holiday on March 8. 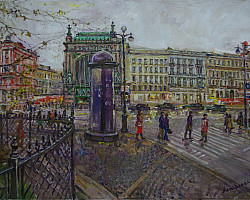 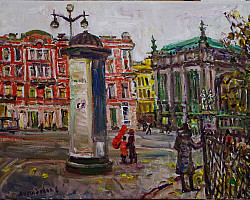 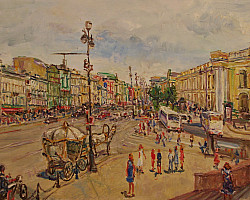 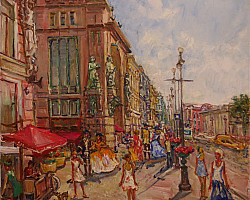 Larisa has been engaged in exhibition activities for about 20 years. (first personal exhibition in 2001, in Belozersky – Beloselsky, in St. Petersburg); if you do not take into account the very first in the school № 1 in Kazan. Participated in about 100 exhibitions.

“In the works of Larisa Akhmadeeva, a significant place is occupied by works devoted to St. Petersburg. The author’s immediacy of perception, the impressionistic manner of performance inform the famous urban landscapes of the poetry of the moment, permeated with a lyrical mood. ”Honored Worker of Culture S. A. Yanchenko.

Larisa Akhmadeeva in 1994 graduated from the Kazan College named after N.I. Feshin. In the same year she moved to St. Petersburg, where she was a volunteer with D.A. Colleague, at V.I. Reichet; and studied in the drawing classes of the Institute of Painting of Sculpture and Architecture named after I.E. Repin. Since 2004 he is a member of the Union of Artists of St. Petersburg, in the same year he becomes a member of the St. Petersburg Pastel Society. Works in various genres, various techniques (oil, pastel, watercolor), devotes a lot of time to plein air. The works of Larisa Akhmadeeva were repeatedly exhibited at the Pastel Biennale in Poland, France, Russia, were presented at international exhibitions in Finland, Denmark, England, Italy (the year of Italy and Russia), Holland, Belgium, Luxembourg. From the museums where the Petersburg Pastel exhibition was held, the artist received many letters of thanks. At exhibitions, she held master cash desks. Master class in pastel on the opening day at Mikhailovsky Castle at the opening of the exhibition “PASTEL OF RUSSIA 18-20VV. “For the city administration. And at the International Art Festival dedicated to the anniversary year of Russia and France in the Manege of the Cadet Corps in St. Petersburg; At the Embassy of the Russian Federation in the Netherlands, an Autobiography is included in the Swiss encyclopedia of Who is Who in Russia. The artist’s works are in private collections and museums in Russia and abroad: at John Neumeier (his collection dedicated to V. Nizhinsky) was exhibited at the Museum d’Orsay), in private museums in Germany, in the State Historical-Architectural and Art Museum “Island city ​​of Sviyazhsk ”, in the museum“ Picturesque image of Russia ”(Moscow). In 2007, Kazan hosted her personal exhibition in the Union of Artists of Tatarstan, which was noted by the Ministry of Culture of Tatarstan as a cultural event in Kazan. And she was awarded diplomas, including from the Union of Artists of the Republic of Tatarstan. Last exhibitions in 2018–2019 passed in the Konstantinovsky Palace in Strelna, at the Embassy of the Russian Federation in the Netherlands; at the festival of embassies in The Hague; in the lobby of the theaters of the Netherlands; at Christmas in Brussels at the RCSC; and for the New Year in Luxembourg. In 2020 she participated in Art Poetry in the Union of Artists of St. Petersburg. Exhibitions are planned for Holland Day in St. Petersburg and for Museum Day in the F.I. Museum Chaliapin and A.M. Gorky in Kazan.