Exhibition of lithographs by Semyon Mikhailovich Bely "Roman with a Stone"

The project was implemented with the assistance of the Committee for Culture of St. Petersburg. 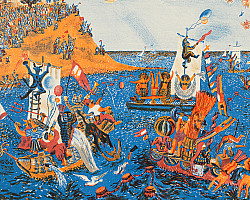 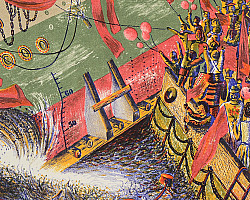 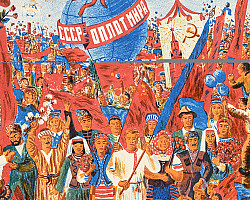 The second level is the structure of the exhibition. Four halls show the time in which the artist found himself, a successively unwinding spiral - from the early seventies to perestroika. The works seem to be illustrations for the constantly working radio - news of politics, sports, celebrations - from day to day, from month to month, from year to year. In order to immerse the viewer in the atmosphere of stopped time, to change his relationship with temporality, the exhibition has the opportunity to collect puzzles made on the basis of the artist’s works. The unhurried atmosphere of the period of stagnation was conducive to this.

And the third level is, in fact, the story about the artist himself, who belonged to the school of Leningrad lithography - on the one hand, and on the other, he always remained to a certain extent alone, as a representative of Sotsart, which actually did not exist in Leningrad in the seventies and eighties. Semyon Bely, unlike the main representatives of Sotsart, managed to avoid a direct critical attitude and saw almost biblical motives in an endless series of ideological processions, and in an early perestroika atmosphere - a mixture of Boschian hell and hope.

Semyon Mikhailovich Bely (1938–2010) - a member of the Union of Artists of Russia, since 1968 a member of the Union of Architects of Russia. He worked in architecture, easel and book and magazine graphics. The artist’s works are in many museums and private collections of the former USSR and abroad. Among them are the State Tretyakov Gallery, the State Museum of Fine Arts. A.S. Pushkin, State Russian Museum.