The exposition will comprise about 100 works of different years from the collection of the artist’s family. 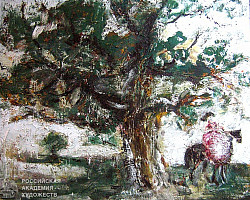 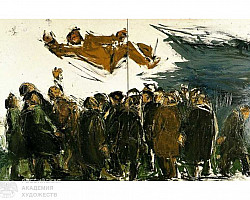 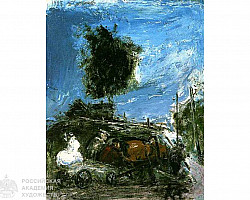 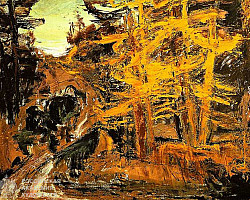 A.S. Slepyshev is one of the most distinctive Russian artists of the 20th and beginning of the current century, a true master of color, who was always overwhelmed by the joy of a free painter, who easily plays with paints and finds mysterious contact with them. He was endowed with tremendous perseverance, ability, power to turn the surrounding realities to the benefit of his main choice. In his picturesque visions-parables, “personal experience” and knowledge of European pictorial culture, familiarization with the Moscow school of painting in the first half of the 20th century are “melted down”.

“With his canvases with invisible threads, streams of good, light, good mood, beauty flow into a person. This is the same unconstructed optimism, similar to Mozart’s worldview, it is organic and generous… His paintings are both large-scale and lyrical, dynamic and thoughtful, and most importantly - the artist’s tenderness, his enthusiasm for life, his deep sense of the Motherland are embedded in them, ”wrote about artist filmmaker E.A. Ryazanov.

A.S. Slepyshev was born in the village of Lopatino, Penza region, studied at the Nizhny Tagil Art and Industrial College. In 1964 he graduated from the Moscow Art Institute. IN AND. Surikov (workshops of L. Shipovsky and A. Deineka). Since 1967 - a member of the Moscow branch of the Union of Artists of the USSR. At the turn of the 1960s and 70s. he performed several murals and decorative compositions in public buildings in Moscow. Later, the artist began to engage in easel painting and graphics. He was an excellent painter, draftsman, master of watercolors. From 1990 to 1996 lived and worked in Paris, during this period he held about thirty solo exhibitions in France. Then he settled in Moscow. He wrote a lot and seriously about art and about people of art. In 2004, a collection of selected works “Man-Made Beauty” was released.

Significant influence on the formation of the style of writing A.S. Slepyshev had the work of masters of the older generation A.V. Fonvizin and B.P. Chernyshov. He was a talented follower of this lyrical-romantic tradition of Russian art (the circle of artists of Makovets, the group of Thirteen, the late Drevin). By the beginning of the 1970s, a free, uninhibited plastic manner, characteristic of the work of A. Slepyshev, was clearly manifested. An artist of tremendous capacity for work, he was in constant search for new formal solutions. The works of A. Slepyshev are distinguished by the features of improvisation. In the finished picture, the master strove not to lose spontaneity and naturalness, so each of them retains the dynamics of the sketch, the energetic pressure of temperament. But behind this seeming ease of execution was a huge preliminary work, the creation of numerous sketches - graphic sheets, watercolors, gouache, pen drawings, which at the same time represent complete, completely independent works. In the course of work on the topic, whole series of variations were created expressing the various nuances of moods.

The art philosophy of A. Slepyshev is extremely humanistic, pictorial compositions are like poetic fantasies. Slepyshev’s love for poetry was expressed in a series of paintings written by him in the second half of the 80s, dedicated to Russian poets: “N. Gumilev ”,“ Anna Akhmatova ”,“ M. Tsvetaeva "," A.S. Pushkin. " The craving for timeless, universal human themes, a penchant for monumental epicness naturally led the artist to biblical stories, and he chose the most tragic moments of the gospel history: The Last Supper, The Carrying of the Cross, and The Crucifixion. Over time, two areas of creativity became clear: multi-figure compositions on biblical, historical themes and poetic compositions with a rural landscape and mythological motifs. Among the main pictorial series are “Oriental Tale”, “Travelers”, “Halt”, “Nomad”, “Flight”, “Exodus” (1960-70, “Village” (early 1990s), “Bois de Boulogne”, “ Napoleon in Russia ”,“ Russian Flag ”,“ Churches ”,“ St. George the Victorious ”,“ Russian Roads ”-1990s and many others.

The living space of numerous plots of the works of A. Slepyshea is the surrounding nature. This is closely connected with the memories of the rural peaceful landscapes of his childhood, which struck by the complexity, variability, color harmony, later embodied by the mature master in expressive canvases. But Slepyshev’s favorite “groves” are not just a backdrop for his stories, as the researchers noted. “The road, the meadow below, the crowns of trees from above seem to be ready to step out of the canvas, take the viewer under their Canopy. Shapes, objects, masses and color spots, individual brush strokes - all this together creates the impression of an uncontrollably pulsating multidimensionality. Such plastic dynamics, color-shaped stereoscopy of actually motionless, laid out on the plane of forms is truly rare quality in modern painting. " The works of A. Slepyshev are presented in the collections of the largest museums - the State Tretyakov Gallery, the State Russian Museum, and the Pushkin State Museum of Fine Arts. Pushkin, the State Museum of the History of Moscow, the Peter Ludwig Museum (Germany), the Kostaki Gallery (Greece), the Zimmerli Museum (USA), as well as in numerous private collections of leading politicians, business representatives, artists, etc. He gave his paintings to the provincial museums of Russia a lot and eagerly.

The Russian Academy of Arts provides the viewer with a rare opportunity to meet with such an extensive collection of works by the famous master.