Exhibition of works by Vladimir Sokovnin

The Russian Academy of Arts presents an exhibition of works by the People’s Artist of Russia, Academician and member of the Presidium of the Russian Academy of Arts Vladimir Sokovnin. The exposition features about 40 paintings and the author’s installation, which recreates one of the costumes of the film "Kin-dza-dza" (directed by G. Danelia), which the artist co-authored with his wife Natalia Zhuravleva in 1986. 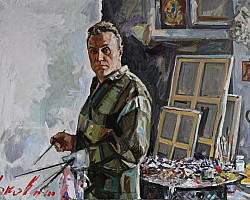 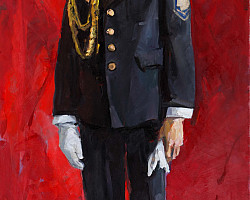 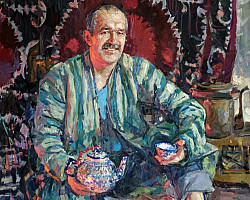 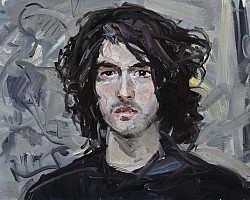 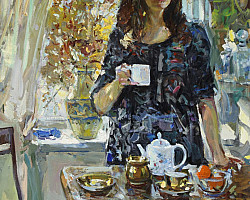 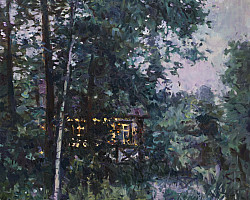 Vladimir Borisovich Sokovnin was born in Moscow in 1955. In 1982 he graduated from the Faculty of Applied Arts of the Moscow Textile Institute. A. N. Kosygin. Since 1976 - a constant participant in Moscow, republican, all-Union art exhibitions, including personal ones. VB Sokovnin’s work has been marked by numerous awards, including the Order of Friendship (2018), the Order of St. Sergius of Radonezh III, II degree (2001, 2005), medals of the Russian Academy of Arts, Ministry of Agriculture, Moscow Union of Artists of Russia, Union of Artists of Russia, TSHR and others. The author’s works are in the collections of a number of art museums in Russia and in foreign private collections in China, France, Germany, and the United States.

Vladimir Sokovnin - is the author of the triptych "Memory" at the Museum of the Great Patriotic War on Poklonnaya Hill (1985), participated in the reconstruction of the picturesque decoration of the Cathedral of Christ the Savior (2000). He also worked as a film artist and designer, creating costumes for films: "Magicians" (director K. Bromberg "Odessa Film Studio", 1982), "Kin-dza-dza" (director Danelia G. "Mosfilm", 1986). But, of course, painting became the author’s true vocation.

What people, characters, feelings and destinies does the artist manage to capture on canvas? Examining the portrait gallery of Vladimir Sokovnin’s painting, one gets the impression of a silent dialogue between the heroes of the works and the viewer. The accuracy of the images found, whether it be a portrait of a beloved wife at morning tea on a summer veranda or an imposing figure of a confident businessman, reveals the most interesting world of human lives, each of which wears its own appearance with dignity and protects its true inner essence from prying eyes.

Depicting contemporaries, Sokovnin often turns to the tradition of ceremonial portrait, each time creating a special space-background, which, regardless of the degree of concretization of time and place (from a detailed, descriptive, detailed interior to a uniform color plane behind the figure) helps to think out the structure of a person’s personality. The unique individuality of the poses of the portrayed, their gaze directed at the viewer is conducive to conversation, but they are not invited to come close or enter the picture space - the independence of the model’s character reserves the right to a certain distance, a kind of appeal to "you".

The most difficult subject for the artist - a self-portrait - is also interpreted in a special way. Vladimir Sokovnin paints Self-Portrait (2020) accompanied by the artist’s usual tools: brushes, a palette, tubes of paints, a clean new canvas, and surrounded by already created canvases facing the wall. A firmly sculpted figure, centering the compositional balance between a white background on the left and almost black on the right, is perceived as a frozen moment of concentrated artistic work - as a transition from completed works and anticipation of future ones - another moment, and the brush, frozen in hand, will begin its pictorial action… directed eye-to-eye to the viewer, as if the author of the canvas is looking at us, and we become part of the work that is being written right now, at the present moment.The feeling of the processuality of painting is complemented by the etude character of writing, the principle of "non-finito", which creates the effect of the incompleteness of the work: before a new creative stage, the artist puts an ellipsis in dialogue with the viewer…

The connection between the portrait and landscape works of Vladimir Sokovnin seems unclear only at first glance. People and their surroundings are generally painted carefully and restrainedly, while the landscape is characterized by great freedom, breadth of brushstroke, color "walk around". The portrayed people are mainly shown in their characteristic quality for society - a cadet, horsewoman, swordsman, business person. And changeable nature, full of colorful overflows, hard and soft touches, subtle pictorial observations - on the contrary, is given in its primordiality and purity, not inhabited by an obsessive human presence.

The ability to work with a conventional picture depth, introducing the viewer’s gaze through a receding path, falling diagonal shadows, inclined bush branches, gives him an artist accustomed to thinking in three dimensions of space. It seems that it was he, as a contemplator, who was lucky enough to discern the tenderness of the snow lying on the spruce branches in touching the light sky.

The magic of the artist’s diverse creative range is surprisingly revealed in the expositional neighborhood. One gets the impression that the heroes of his portraits are separated from natural beauty and pacification only by a picture frame. It is worth stepping over it - and all the seasons, caught by the painter’s sensitive gaze and brush, will become for the characters, and after them for the viewer, that “secret garden” in which a wise like-minded person will not break the precious silence…

The material was prepared on the basis of an article by the candidate of art history, corresponding member of the Russian Academy of Arts V. A. Lagutenkova