Vladimir Borisovich Sokovnin was born in Moscow in 1955. In 1982 he graduated from the Faculty of Applied Arts of the Moscow Textile Institute. A.N. Kosygin. Since 1976, he has participated in many Moscow, republican, and all-Union art exhibitions, including foreign ones, in the cities of Bratislava (Slovakia), Brno (Czech Republic), Beijing (China), Philadelphia, Washington (USA). Since 1985 - a member of the Union of Artists of the Russian Federation. Since 2011, V. Sokovnin is an Honorary Professor at the Chinese Academy of Arts. He teaches at the Humanitarian Institute of Television and Radio Broadcasting. M.A. Litovchina, professor of the department of art.

In his desire to reflect modernity in its versatile manifestations V. Sokovnin turns to various types and genres of fine art. The artist travels a lot around the country, abroad, works enthusiastically, trying to reveal the nature of people and nature. The artist is driven by the desire to work on large-scale images and significant topics. Large-format plot paintings created by the author convincingly demonstrated his ability to plastically express an precisely formulated task, freely organize complex compositional space, and achieve the necessary coloristic rhythm. The experience gained allowed him to subsequently turn to landscape and portrait, focusing on this his main attention. 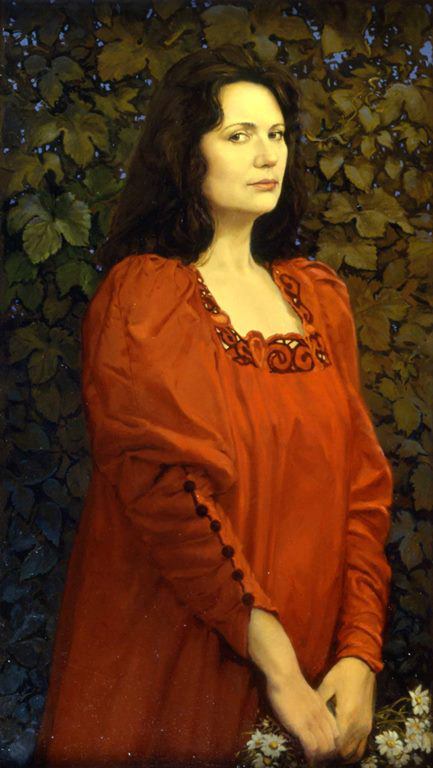 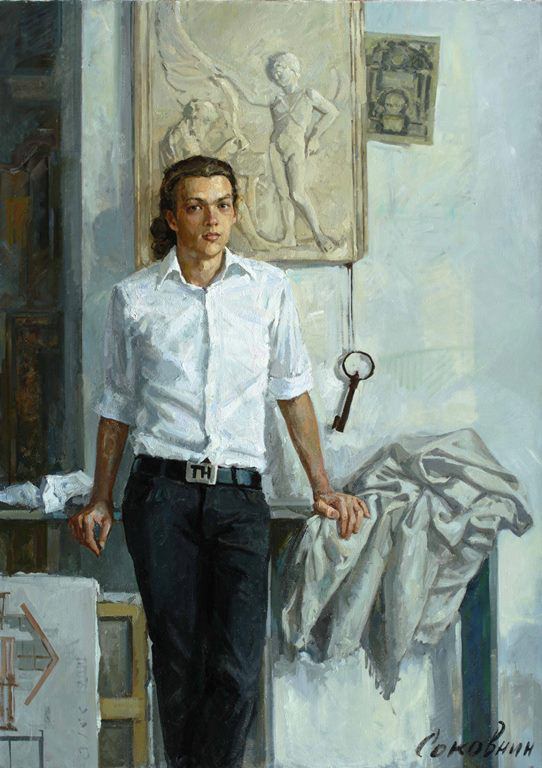 V. Sokovnin also worked as a film artist and as a designer. He is the author of costume designs for the films “Sorcerers” (dir. K. Bromberg), “Kin-dza-dza” (dir. G. Danelia), the triptych “Memory”, which is in the collection of the Museum of the Great Patriotic War on Poklonnaya Hill in Moscow, galleries of official portraits of Gazprom directors, a portrait of the first president of Russia B.N. Yeltsin, a portrait of the Patriarch of Moscow and All Russia Alexy II, a portrait of the president of Indonesia Megawati Sukarno Putri, etc. The accuracy of the portrait characteristics is noteworthy. His portraits, painted in a free manner, are expressive, organically live in space thanks to the synthesis of portraiture and landscape painting. In the portrait, he brings his attitude and understanding of the model, seeks to convey the personality and character characteristics of his heroes.

V. Sokovnin was an active participant in the restoration of the artistic decoration of the Cathedral of Christ the Savior, he also recreated murals in the Church of the Resurrection of the Holy Protection Monastery and others. The result of work on large religious compositions was the creation of a gallery of historical portraits. 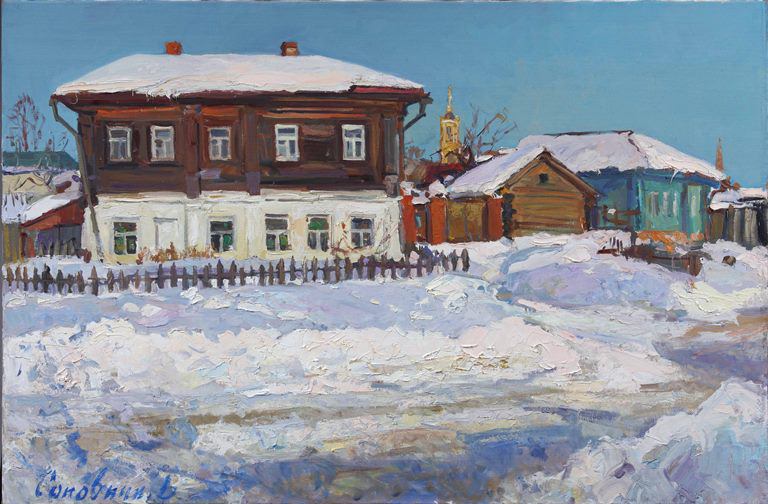 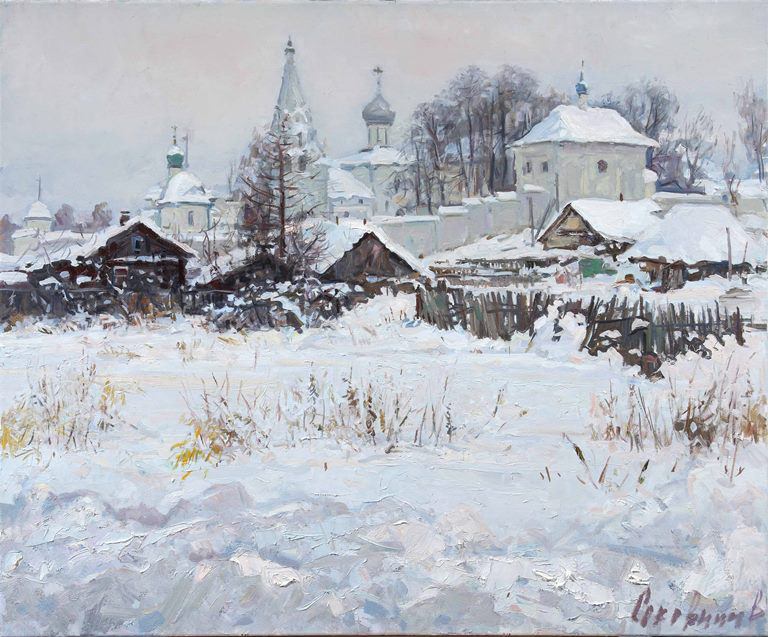 The artist is the author of a series of landscapes in which he seeks to convey his own thinking and experience of Russian reality. For the artist, it is important not so much the expressive landscape motive as the emotional nature of the plot. Meditation, a pacified state are heard in many landscape works. Appeal to the landscape allows the artist to often create a generalized synthetic image-symbol, to achieve the monumentality of the image through spatial comparisons and contrasts of light and dark, large volumes, using pictorial means to create a complex image of the eternal interaction of earthly and heavenly being, their harmonious interpenetration. In his paintings, the traditional approach is often organically combined with generalization, conventionality, dynamics of composition, and modern attitude to color. The most significant in a series of landscape works by V. Sokovnin are landscapes of old Russian cities and villages. He sees the attention to Russian antiquity, Russian culture of the past as the preservation of the national originality of Russian life and Russian art. These works dedicated to old Russian cities are marked by an expressive compositional solution. The originality of architectural monuments, the picturesqueness of small houses, their chaotic location due to artistic transformation transform the charm of ancient cities. The magic of the Russian landscape, the magic of antiquity captivate V. Sokovnin and give his works a purely national flavor. 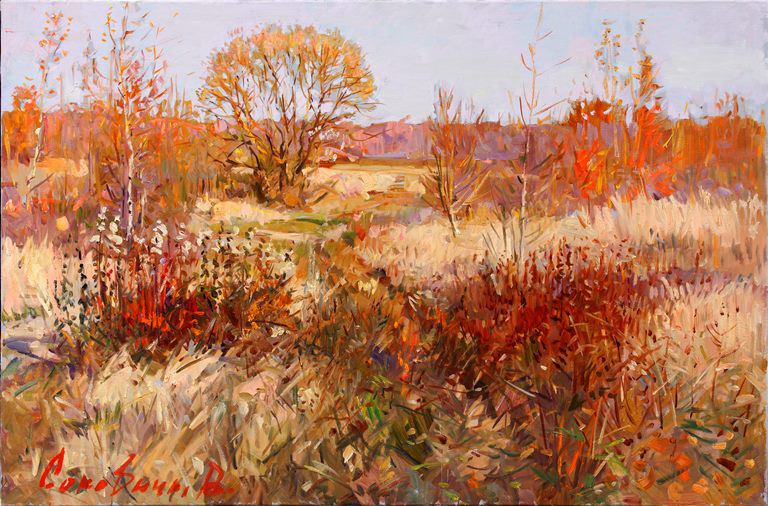 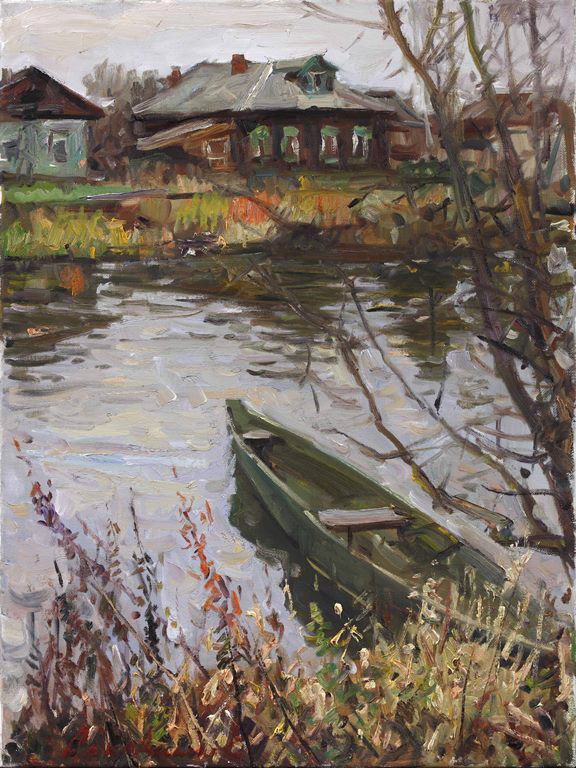 The work of V. Sokovnin was awarded with awards, among which: the Order of the Russian Orthodox Church "Rev. St. Sergius of Radonezh" III and II degrees, medals MOSH and PAX - for "Reconstruction of the Cathedral of Christ the Savior", diploma of the Ministry of Culture of the Russian Federation, gold medal of the Creative Union of Artists of Russia and etc.

The exhibition presents about 100 paintings of the artist of different years.

More details: on the website of the Russian Academy of Arts