The Russian Academy of Arts presents an exhibition of works by People’s Artist of the USSR, Academician of the Russian Academy of Arts, laureate of State Prizes, honorary citizen of the Tver region, awarded by many state Ephraim Ivanovich Zverkov (1921-2021) and works of laureates of the Landscape Competition named after E. I. Zverkov "Link of Generations"… The exposition will include more than 50 paintings. 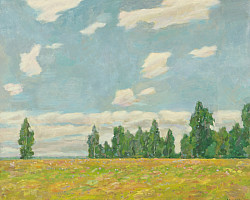 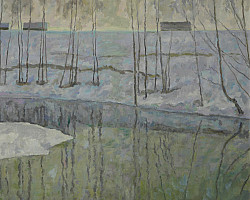 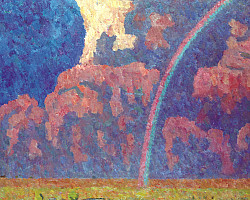 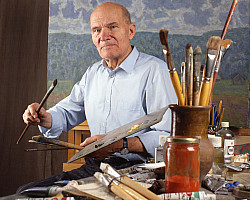 Our time will reach descendants primarily in works of art. The name of Efrem Ivanovich Zverkov, an outstanding master of painting, who created his own direction in the art of national landscape, has firmly entered the history of domestic and world art, has received wide recognition in Russia and abroad. His multifaceted work is a whole era in the artistic culture of our country. He was among those leaders who blazed new paths in Russian art in the 1960s. Efrem Ivanovich was the first Moscow artist to begin to explore the Russian North. In the late 1950s - 1960s, he made six long creative trips to the Komi Republic and the Arkhangelsk Region. Being the successor to the cultural tradition, the genetic carrier of the national mentality in his landscapes, he embodied the traditional system of spiritual values,conveying the idea of ​​the common genesis of man and the universe. The northern region had an important influence on his work and on the nature of his "interaction" with nature. One of the first Zverkov became the exponent of the "severe style" in landscape painting. Working in the North, he managed to show his enormous talent as a landscape painter, to influence the development of landscape painting in our country.

The canvases collected at the exhibition reveal the main philosophical idea of ​​the creative work of the front-line artist, who traveled the roads of the Great Patriotic War from the first day to the victorious days of May: “Every smallest corner of their native land is infinitely precious, and people need to protect this grandiose world, a planet called Earth. "

During his lifetime, recognized as a classic of fine art, EI Zverkov, with his work, large-scale and multifaceted activities, actively influenced the development of the artistic life of Russia.

The creative legacy of Efrem Ivanovich is in demand by new generations. A retrospective exhibition of the master’s works is combined with an exposition of paintings by the winners of the EI Zverkov Landscape Competition, students of the Tver State Art College named after A.G. Venetsianov. This competition was organized in 2006 on the initiative of E. I. Zverkov and N. G. Sirotina, the director of the college, an honorary member of the Russian Academy of Arts. Participation in the competition contributes to the professional growth of students, their moral and spiritual development. It is impossible to overestimate the importance of this competition for the preservation and development of the unique traditions of the national school of painting. Each competition is an important stage on the difficult path of climbing to the heights of mastery.

The picturesque heritage of EI Zverkov, the works of the students-laureates of the landscape competition, expand the understanding of the national originality, historical value and uniqueness of Russian art.