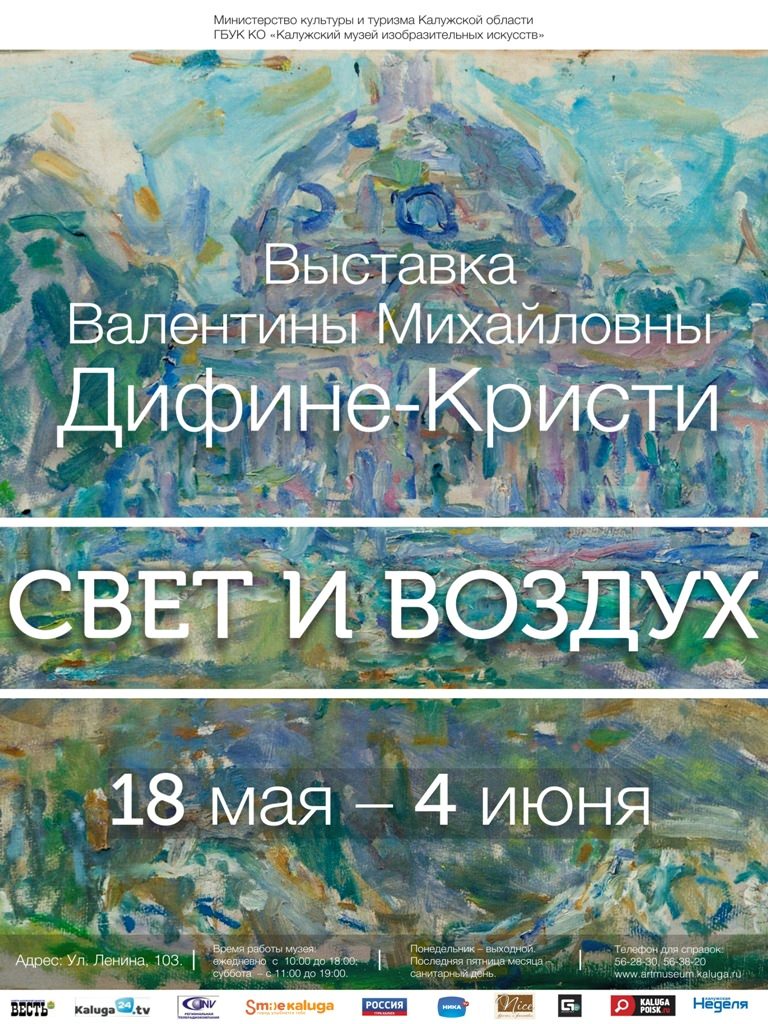 Valentina Mikhailovna Diffine-Christie was a member of the Moscow branch of the Union of Artists of the USSR. Among her canvases we find landscapes, still lifes and portraits of factory workers typical of Soviet art - a fitter, electrician, milling machine operator, and crane operator of a foundry. By orders of the plant, she wrote to Komsomol members and old partisans, created Leninian, revealed the themes of the civil war. And yet, the works of Valentina Mikhailovna attract attention with their uniqueness. The feature of the work is to combine traditional Soviet themes with the artist’s picturesque searches. A born painter, Valentina Diffine-Christie sharply and accurately felt the color of the world. In young years, her painting was formed under the influence of the work of her husband, a talented artist Eugene Diffine, who worked in the tradition of Konstantin Korovin. She was educated in the workshop of S. Gerasimov and was a representative of the Moscow school of painting. Diffine-Christie found her own path in art in the 60s of the last century.

The richness and imaginative depth of her paintings is created, first of all, by means of painting. Valentina Mikhailovna claims: “There are no contours in painting. Borders and objects are determined only by a combination of colorful spots. ” She denies the subjectivity of the perception of surrounding reality: you only need to be able to see their exact relationships “in the whole composition at the same time”. The lack of contours does not prevent you from feeling the accuracy and constructiveness of the drawing, and seeing the plastic form in its portraits and compositions.

The style of her work is called "spiritual impressionism." The nature of her painting, her formal searches are in many respects close to those artistic searches that were conducted by Russian masters of the late 19th - early 20th centuries (Krymov, Sapunov, Saryan, P. Kuznetsov and others), in whose art a separate page was a participation in the association “Blue the Rose". Just like them, Diffine-Christy refers to the impressionist method. But using separate strokes of color, it makes them more diverse, flexible, gives other semantic meaning. They reveal the nature of form and space and, at the same time, create restrained lyrical images. Subtle and unobtrusively sounding poetic note enhances the emotional expressiveness of the paintings and thereby enriches their content. The color system determines the mood in her paintings.

Summarizing life observations, the artist uses the possibilities of painting in all their wealth and diversity. Building the color structure of this or that work, she achieves the impression of air vibration of luminous colorful tones. With particular clarity, this manifests itself in her later works. Light shine is achieved in the space of paintings not due to black and white contrasts, but with the help of color harmony, dissonances and accents.

This rhythm of pulsating strokes, as it were, creates a complex and lively texture, conveys the trepidation of feelings embedded in a particular subject, landscape or portrait image. The pictorial method developed by Diffine-Christie allows her to show in the paintings a living, moving, breathing world that includes a person, as its inseparable part.

Achieving the aesthetic impact of the paintings, Valentina Mikhailovna Diffine-Christie achieves on their plane the rhythmic diversity and expressiveness of color ratios that brings painting closer to music.

A. Pavelieva Art critic, member of the Union of Artists of the Russian Federation

The exhibition runs until June 4.