Exhibition "The Magic World of Glass by Alexei Zel"

On March 24 at 15-00 the grand opening of the exhibition “The Magic World of Glass by Alexei Zel” will take place, the opening will take place at Lenin, 103 (blue hall).

The name of the Moscow artist Alexei Zel has long been known to lovers of applied art. For 40 years, he has been working with quartz glass unconventional for Russian (and world) glass-making. Many years of hard work allowed him to develop a wide range of methods for processing this material. The combination of the talent of the artist and the master virtuoso in one person made it possible to create works that have no world analogues. The creations of Alexei Zel were recognized by experts of the highest level, and in 1993 he was awarded the title "People’s Artist of Russia". 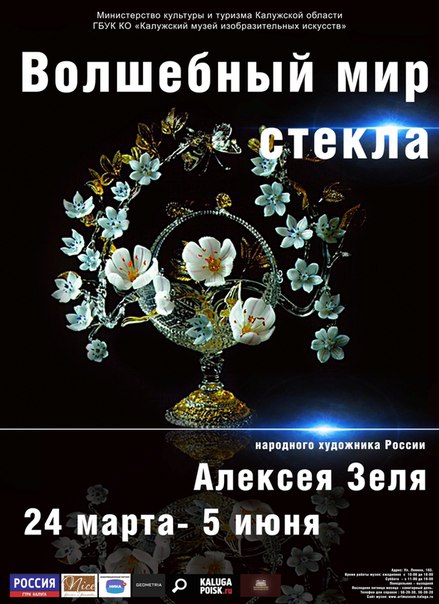 Alexei Zelya was born on August 1, 1944 in an intelligent Moscow family, where they loved art and highly respected science. His father is an officer, a descendant of a noble family, his mother had a pedagogical education. From early childhood, Alexei was delighted with the wealth and beauty of the world around him, he was fascinated by the observation of nature - during the summer holidays the young naturalist spent hours in the field, watched the work of a spider, noted and classified birds in his diary, studied plants. Three years of service in the army did not change his aspirations - Alexei spent his free time preparing for entrance exams at the university. No one had any doubt that in the future he would become a biologist. But an early marriage and the birth of a daughter led to the decision to quit the university and go to work - its high moral principles did not allow to shift the responsibility for maintaining the family onto the shoulders of the parents. A suitable job was found at the Moscow Electric Lamp Plant, where yesterday’s student was to master the profession of glassblower, or rather quartz tupu. Here began a new biography of Alexei Zel - an artist. 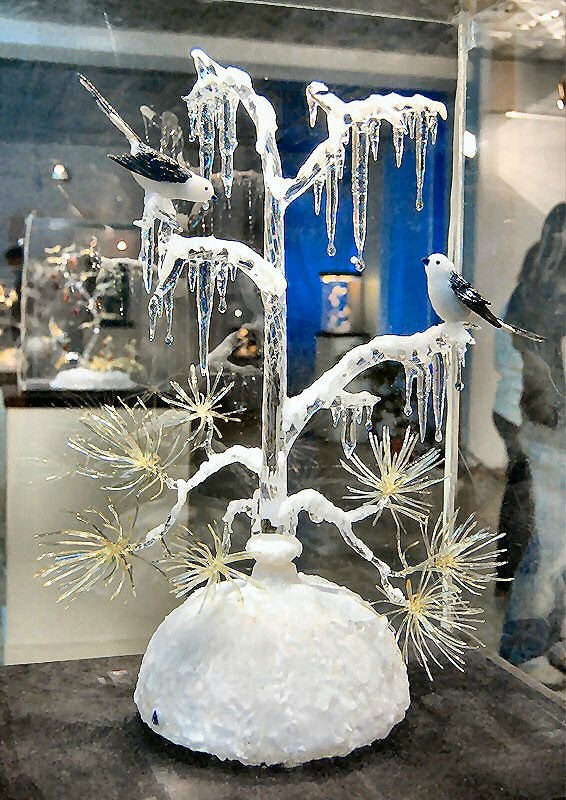 A positive attitude to the events that took place in his life helped Alexey quickly master a new business. The production of quartz lamps is a piece-wise process that does not require fuss. The work of the master is accurate and calm, one might even say - meditative. Lowering the next workpiece into the flame of the burner, Alex sank into his thoughts. A vivid imagination took him from a cramped factory workshop to beautiful corners of wildlife, restoring it to the smallest detail. The work itself did not leave indifferent.

From the first days, Zelya succumbed to the magic revealed during the melting of quartz glass, was imbued with love for his ability to reflect and transmit light, the thin plastic of this amazing material. In his free time between shifts, he began experimenting with glass, smelting solitary animal figures from it. At the Zelya Glass exhibition, early works are represented by miniatures Rhino, Dachshund, Lama, and Eared Hedgehogs. Looking at the local factory craftsmen, Alex became interested in creating candle holders. Already becoming a recognized master, Alexei returned to them from time to time, embodying new fantasies in simple forms. So, from the simple Empire-style candlesticks (1979), a whole series of works began, including those skilled in the art of execution, such as the nine-candlestick Latgalsky (1984) and complex artistic and compositional works like Ryabinka (1988), Grapes ( 1988), "Holy Russia" (1989).

Improving his technique, Alexey Zelya turned to more complex forms - baskets and ships. Baskets of flowers - a test for a sense of composition, ships - a kind of test of skill. It is worth mentioning especially about the sailing fleet - brigs, caravels, frigates, galleons… probably, the author himself would have found it difficult to answer how many of them were made in the 80-90s. From simple monochromatic models, such as Galleon (1982), to compositions grandiose in scale of idea and embodiment, Sails of Russia (1989).

During this period, the artist’s creativity is noticed “upstairs”. At the Chromatron plant, a workshop is being built specifically for him, where he begins to work for the government. True, so far an unnamed artist. The Kremlin on behalf of the country gives its work to various political figures, among them French President Francois Mitterrand, British Prime Minister Margaret Thatcher, Swedish Prime Minister Olof Palme, and one glass ship "sailed" already to the Philippines. Alexei Zelya fully realizes his talent in plot compositions. They become the standard of skill and artistic imagination of the author. And this is not surprising - in them found a way out of love for the creations of nature. Finally, Alexei was able to embody all the knowledge gained in childhood and adolescence. Representing flowers and plants, insects and birds, the artist is always thoroughly accurate down to the smallest detail. Early plots include “Grebes” (1982), “White Chrysanthemums” (1982), “Winter Morning. Ermine ”(1983),“ Fox and Grapes ”(1985), widely recognized by experts and admirers of Alexei Zel’s work and not inferior in maturity to a later work. One of the author’s favorite compositions - “Touch” (1987) - can be attributed to autobiographical. It shows the first acquaintance of the boy Alyosha with the winter forest and its inhabitants.

Since 1996, Alexey Zelya has been living in his house in the Moscow region, where a workshop is equipped on the ground floor. He created more than 200 compositions, which made it possible to compile a collection of the artist’s works. Most of it is presented at two traveling exhibitions traveling around Russia. As before, the artist is organizing exhibitions and transporting glass masterpieces together with his wife Olga.

Having given the best years to his beloved job, with his retirement, Alexey Zelya began to devote more time to himself and his family. Since childhood, he was attracted to travel to distant lands, so in recent years he has visited with his wife in many parts of the world: in Ecuador and the Galapagos Islands, Sumatra, Cambodia, Fiji, Zimbabwe, Botswana, South Africa, the Philippines and many others.

Alexei Zelya did not become a biologist, but became a People’s Artist of Russia. He received this title in 1993 for his contribution to the development of arts and crafts and extraordinary craftsmanship, which he achieved on his own. Therefore, the name of Alexei Zel can rightfully be attributed to that wonderful galaxy of brilliant self-taught who glorified our land.