Exhibition of paintings by Irina Rybakova "Here my Motherland begins"

The works of Irina Rybakova are traditional and canonical in the best sense. They happily combine a good school of painting and the soul of the author, receptive to the beauty of the world. The artist’s work incorporates the best traditions of the Russian realistic landscape. The main theme of the painter’s canvases is the discreet but spiritualized world of Central Russian nature.

Her painting style is distinguished by laconicism, the desire to reveal the beauty of everyday life. The artist’s work is permeated with love for his native land, for a simple working person. The artist is attracted by a person who has not lost his connection with nature, who has not lost the ability to look at things sincerely and artlessly. Perhaps that is why the painter depicts children with such love: they embody bodily and spiritual purity, an inquisitive and kind interest in the world. The light and heartfelt warmth that these works exude awaken in the viewer the desire to return to the sunny, harmonious, magical world of childhood. 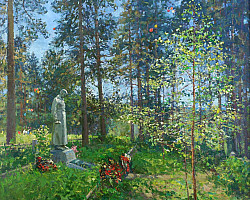 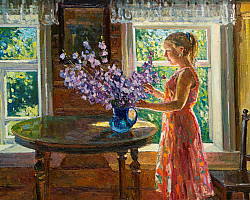 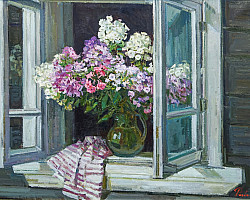 The whole life of Irina Vladimirovna is the fulfillment of the cherished dream of childhood, and for this reason alone she is a person of a happy fate. Rybakova was born in Tver, not far from the famous Akademicheskaya dacha, a real "Mecca" of Russian realistic art. The picturesque Tver meadows, forests and lakes, the indescribably beautiful Msta River do not even make you wonder why the artists chose this particular place. Once upon a time, students of the Imperial Academy of Arts had their summer practice here. In the late 1940s, the Academic Dacha was transferred to the jurisdiction of the USSR Academy of Arts and became a creative platform for Soviet masters of landscape and landscape genre painting. In 1970–1980 modern workshops and auxiliary premises appeared here, and the Academic Dacha (since 1964 it has been named after I.E.

The first and main impression of Irina’s childhood is an artist working in the open air. The girl could spend hours looking at how silent and strange people in berets stained with paint ceremonially serve at the canvases - and pictures of native nature come to life on the canvases. Alexei and Sergei Tkachev, Nikolai Novikov, Anatoly Levitin, Valentin Sidorov, Alexei Gritsay, Yuri Kugach - each name of the artists working here is the brightest page in the history of Russian fine art. Village girls and boys were often invited by well-known masters as sitters. The Tkachev brothers invited little Ira to pose for the painting "Bread of the Republic". Here she is, this fragile, barefoot girl in a headscarf, who, with her head held high, watches as a Red Army soldier cuts a loaf of black bread wide. “I was then seven years old. The debut, to be sure, turned out to be nervous. All the guys went to pick peas, I also want to. And I stand with my head thrown back, as if stunned. The neck is stuck. But nothing - I endure! Overcame myself, stayed. For ten years. Every summer, one of the artists invited me “to nature”… ”. Then, at the time of the first contact with the secrets of creativity, a preschool girl could not understand what great masters her fate brought her to, but the inquisitive look of a child grasped the main thing: art is both miracle work and work.

“Artists seemed like magicians to me, and I myself wanted to be in this magic. We found abandoned tubes of paint in the grass, tried to depict something. The only problem is that there were no artists in our family. Nobody worked with me. I had to take the path of self-education: I begged my parents for albums, paints and plunged headlong into my favorite business. And I was five years old. Nonsense! But, apparently, even then I realized: I can’t help but become an artist!” – notes the author of the exhibition. Once, Liya Alexandrovna Ostrov (1914–2009), whose house was nearby, drew attention to a small activist who herself set still lifes for herself and tried to paint them. An established master and a well-known artist at that time, she decided to take on the creative patronage of the girl.

For six months Irina Rybakova was at the Academic Dacha, for six months she studied at a school in Kostroma and graduated with a gold medal. Then she entered the art and graphic faculty of the Kostroma State Pedagogical Institute named after. N. A. Nekrasova. After graduating from high school, Irina Rybakova worked for a short time at the All-Russian Artistic and Scientific Restoration Center named after I. Grabar, studied the skill of an oil painting restorer from the famous artist Lev Bogomolov. But Irina Vladimirovna calls the Academic Dacha her main art universities. It was she who became a true Academy for the artist, the point of intersection of creative searches and routes. Here Irina Vladimirovna found her best teachers.

The first head of the creative stream where she worked was Mikhail Abakumov (1948–2010), an outstanding Russian landscape painter. Then there were streams led by Academician Anatoly Levitin (b. 1922). He and Nikolai Solomin in 1991 gave Irina Rybakova recommendations for joining the Union of Artists of Russia. Yury Kugach’s (1917–2013) judgments and assessments were a good school for the Academician’s artists: his critical comments were both feared and expected. Once Yuri Petrovich approached Rybakova, who was standing behind the sketchbook, meticulously examined the work and said: “It’s small, but she writes like a man!” The main meeting in the life of Irina Vladimirovna also took place at the Academic Dacha. Once, a student of Geliy Korzhev, artist Nikolai Vladimirovich Kolupaev, came here for an academic internship. In 1988, Rybakova and Kolupaev got married. She calls her husband her main mentor in the visual arts: “To have the opportunity to see how Nikolai works, learn from him, listen to his advice is a great happiness for an artist. And the school is serious, strong… "

Today Irina Rybakova is a well-known master of landscape and genre painting. The world of the Russian village is closest to her, the image of a simple rural worker. The author’s picturesque works are imbued with love for Russian nature, for the "small Motherland", for the origins of Russian character and culture. Favorite seasons of the artist Rybakova are early spring and late autumn. These days the world becomes transparent and unsophisticated. Her work has been widely recognized by colleagues and specialists in our country and abroad. I. V. Rybakova conducts pedagogical activities and actively promotes the modern realistic school of painting. He has numerous awards, diplomas, prizes and encouragement from various organizations, foundations, creative unions, ministries and departments.

The text is based on an article by Alexei Zyablikov.