From June 9 to June 15, 2018, the All-Russian Museum of Decorative, Applied and Folk Art will host a personal exhibition of Zhanna Melkonyan, Honored Artist of the Russian Federation (1999), a member of the Union of Cinematographers of Russia, a member of the Moscow Artists Union, a professional production designer for costumes at the Mosfilm film studio. 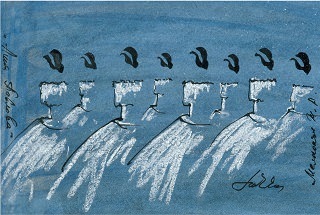 “… The role of the artist in the movie is extremely large. It’s not enough to create a sketch; it needs to be brought to life. Only having an accurate idea of ​​the characters can you create an artistic image. Each time the artist deals with a human personality, unique, original… "

The visitor of the exhibition will be able to find out how the images of Lyudmila, Katerina, Antonina, Nikolai and other heroes of the film “Moscow Does Not Believe in Tears”, which received the Academy Award in 1981, were recognized as the best foreign film. From the sketches of the costumes, you can understand the process of creating an image, penetrate that era.

Emil Lotyanu was not limited to simply retelling the facts of the biography of Anna Pavlova, but created an integral poetic story of her life. The image of the famous ballerina in the sketches of Zhanna Melkonyan, for the lead actor Anna Pavlova - Galina Belyaeva, exactly corresponds to the director’s plan. The film “Anna Pavlova” by Emil Lotyanu received the Grand Prize for the best joint film and the prize for his significant contribution to cinema at the International Film Festival in Oxford in 1984.

On the sketches for the film "Time to Fly" you can feel the atmosphere of expectation in a non-functioning airport, the whole tragicomicism of the situation, about which the film was made.

The exhibition is complemented by paintings and graphics on various topics, such as Armenia, natural landscapes, portraits…

1973 - Graduated from the Faculty of Applied Arts at MGTI (Moscow Textile University named after Kosygin). The thesis was awarded a gold medal at the Pret-a-Porte International Competition in Budapest.

1976 - Work at the Mosfilm film studio under an agreement on the films "Office Romance" (director - E. Ryazanov), "Youth with us" (director - Y. Bondarev).

1977 - Admitted to the staff of the Mosfilm movie studio as a costume designer.

1990 - Chief artist: the first theatrical performance at the Pokrovsky Cathedral “White Stone City”, a costume project “Moscow - the history of Russia”. Awarded the letter of thanks of the Mayor of Moscow.

2010 - Exhibition project "Ballet Russe de Diaghileff" at the Russian Academy of Arts. She was awarded the medal “Worthy”.

She took part in the creation of more than 20 films, including: “Moscow Doesn’t Believe in Tears”, “Anna Pavlova”, “Piece for the Passenger”, “Star of Hope”, “Life is Beautiful”, “Ice People”, “Time to Fly”, “ Time of the dancer ”, etc.