Many years ago, on the Greek island of Rhodes, stood a 30-meter bronze monument to the patron saint, the god Helios, commonly known as the Colossus. He looked at the harbor for more than 60 years, until it was destroyed by an earthquake in 226 BC. Ptolemy III proposed to rebuild it, but the Delphic oracle said that people had offended Helios, and the bronze fragments of the statue remained lying for several centuries in their places.

Today, no one knows where the Colossus stood or what it really looked like. The same can be said about most of the Greek bronze sculptures of the period ending the reign of Alexander and the beginning of the birth of the Roman Empire. The author of Colossus was the sculptor Hares, a student of Lysippus, the court sculptor Alexander. Lysippos was considered the best in his field, but not one of 1,500 of his works survived.

Today we have about 200 bronze sculptures of Ancient Greece, many of them are on display at various museums. The Getty Center in Los Angeles carried out titanic work and was able to assemble 47 sculptures from 34 museums in 12 countries of the world as part of one exhibition. The exhibition will be presented only in three cities: Los Angeles, Florence in March next year and in Washington, DC, in December 2016. The exposition Power and Paphos: Bronze Sculpture in the Hellenistic World (Power and Pathos: Bronze Sculpture of the Hellenistic World) is unique in composition of exhibits. By visiting it, you get a rare chance to see so many masterpieces of Ancient Hellas in one place and at one time.

But there is another difference between this exhibition and many similar ones. If earlier in the center of the exposition there were mainly mythical figures and demigods presented in idealized forms, then the show at the Getty Center presents sculptures depicting ordinary people - noblemen, artisans, athletes. 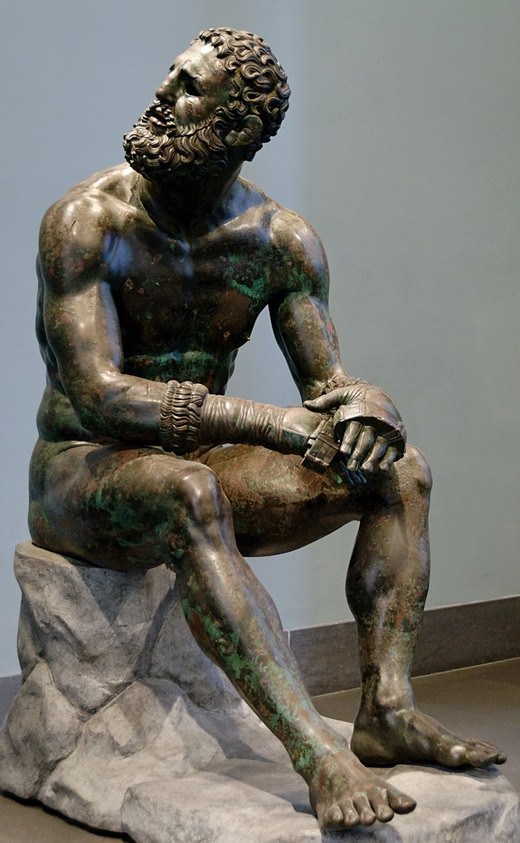 Among the main elements of the exhibition is the sculpture, known as the “Pugilist” (Terme Boxer), a rare, well-preserved exhibit, discovered during excavations in 1885 in Rome. Although the sculpture lacks stone and glass details, inlaid eyes and teeth, and reddish shades designed to indicate blood on the knuckles of his fingers and in wounds, it is he who is the embodiment of the name of the exhibition. We see how a powerful figure of an athlete literally becomes exhausted after a fight, the physical and mental exhaustion of a person is so elegantly conveyed. The realism of the sculpture is unusual for this period, especially the way the hair and beard are softly textured. Bronze was an ideal material for such articulation. The original models were carved by ancient Greek sculptures in wax, and this material gave artists great plasticity, the ability to work out the finest details. Making statues from bronze was much easier than from marble, and the tensile strength of bronze gave great creative scope for composing complex compositions.

Due to corrosion over time, most bronze images have turned black. But initially they had a shade close to the color of the skin tanned under the Mediterranean sun, sometimes with silver nails, ivory teeth, small details made of copper, which gave them even more realism. But not only this expressed the naturalism of Hellenic sculptures. Often, sculptors gave their creations the features characteristic of a given social status and profession.