The painting of the famous Russian artist Vasily Palenov was able to influence not only the fate of its creator, but also the development of pictorial art. A simple, at first glance, the plot of the canvas, has a deep meaning and makes many think.

The picture is very patriotic and touching, you can admire its reproduction and see two versions of the work here: http://www.syl.ru/article/181403/new_kartina-moskovskiy-dvorik-polenova-opisanie . The reason for her writing was the return of Palenov from a trip to Europe, where he got acquainted with the works of foreign painters. In the same year, 1877, the artist moved from St. Petersburg to Moscow. The windows of his new apartment overlooked the Church of the Savior on Sands. It was this view that inspired Palenov to write his picture. The plot was created gradually. At first, only the courtyard and the church were depicted on the canvas. It was this version of the work, in 1878, that brought the artist fame and recognition. Polenov did not expect such a success of his "picture" - that is how the artist called the "Moscow Courtyard". Later, the painting was bought by the Tretyakov Gallery. 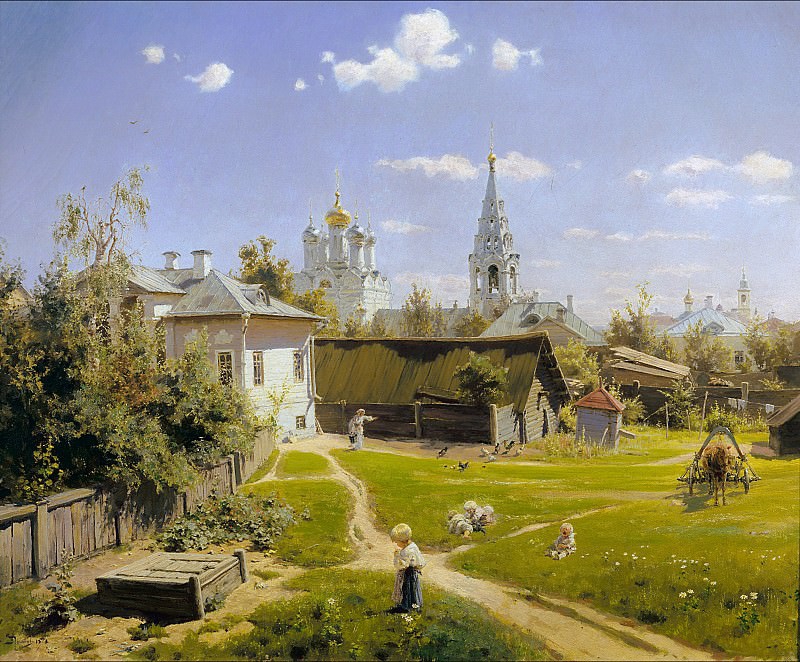 Subsequently, the artist filled the picture with living characters. So, the picture gained life, began to play in the mood. The original version, Vasily Palenov gave the writer Turgenev, being a fan of his literary masterpieces.

Description of the plot of the picture

The painting “Moscow Courtyard” is very simple, but it well conveys the mood of old Moscow, its way of life and everyday life.

The artist depicted the morning courtyard, how the local people gradually wake up, going about their business. The day portends to be warm, and on the street in the morning the children run around. The dome of the old church looks very favorably against the bright blue sky. Clouds are reflected on the walls of the church, and the domes shine in the sun.

The center of the composition was occupied by an old mansion. His outbuildings squinted from old age, the roof of the shed bent and decayed, a tree sprouted through it.

In the courtyard it is noticeable that he has existed for many, many years. But, despite its old age, the yard is in full swing with life in the morning. In the distance you can see a woman walking with a full bucket of water, a harnessed horse, also immersed in everyday worries.

The main characters of the picture are small children, who are a symbol of life and the continued existence of a small courtyard. Children are passionate about their business: someone is playing while sitting on the grass. The girl looks at the torn flower, not paying attention to her little sister.

Despite the rickety courtyards, there is no feeling that life in the courtyard is fading. In fact, it is just beginning. Most importantly, people are happy with their life. The atmosphere of the picture is full of love and kindness.

Looking at the canvas, there is a feeling of something of their own, dear, touching and unique. The artist loved people and perceived them as they are, with their simplicity and shortcomings, looking for dignity in every shortcoming. 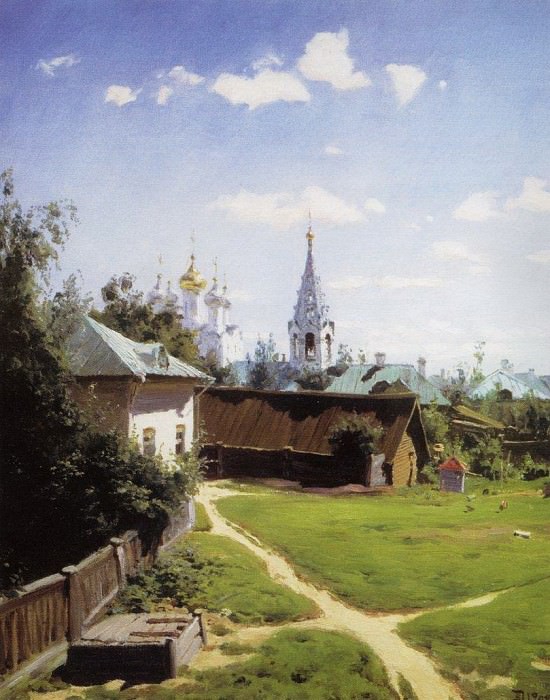 The combination of colors and compositions

It is easy to see that the artist tried to combine two horizons: earthly and heavenly. Above is a bright blue sky, clouds shimmering in the sun, which change their shape, then disappear, then appear. Below - juicy grass, on which morning dew glistens. Cleanliness, serenity and tranquility - all this is under the protection of the church. God himself preserves the peace of the locals.

The picture contains almost all the basic colors that depict the relief on geographical maps. And this is also a non-random choice of the artist. For residents of a small courtyard, their small world is the whole Universe where they live, work, raise children and enjoy life.

At first glance, it may seem that the picture is not at all rich in colors. But, it is worth taking a closer look, and it will become noticeable that even one grass has several shades passing into each other.

Palenov paid much attention to small details, which are a full-fledged picture. Without any trifle depicted on the canvas, the plot of the picture will no longer be complete.

The painting "Moscow Courtyard" became the founder of the new genre. The meaning of such a painting is to make a masterpiece out of simple, rather ordinary things. It is simplicity that attracts the attention of this work, its lightness and natural beauty that everyone understands.