YEKATERINBURG. Since November 4th, Kolyada Theater has been on tour in Tyumen. During the tour, Yekaterinburg artists presented their stage to the engagement theater in Tyumen. Among the regional theaters of Russia, the Youth Theater "Engagement" is among the most famous groups.

Viewers of Yekaterinburg have already had the opportunity to get acquainted with the work of "Engagement". Tyumen artists showed their performance here, consisting of two productions - “Time Capsule” and “Nosferata”. For two evenings, when "Engagement" played its "two-part" performance, the hall was completely filled. 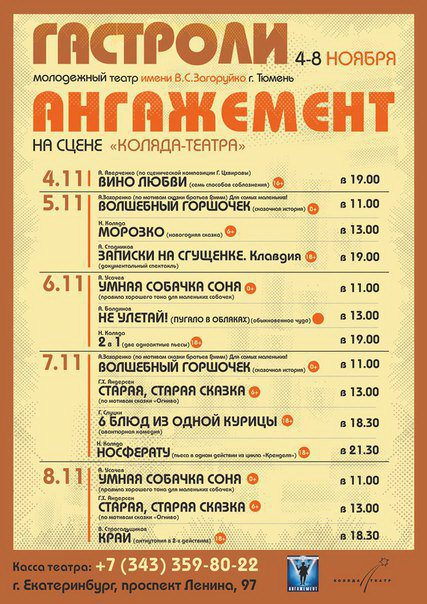 Therefore, the Yekaterinburg theater-goers, subdued by the skill of the Tyumen artists, were eagerly awaiting a larger-scale tour of The Engagement. Their expectations were not in vain. This time the theater group from Tyumen took 11 performances on a tour, five of which were addressed to young theatergoers.

On the first tour evening, November 4th, the guests decided to cheer the Yekaterinburg audience by presenting them the performance “Wine of Love”. Averchenko’s humorous stories, which became the basis of the production, are filled with absurd situations that cause laughter from the audience.

The theme of the performance, scheduled for the next evening, is radically different from the previous work of Engagement. "Notes on" condensed milk. Claudia ”- a documentary performance based on the diary entries of a real person. These diaries were started during the war years by Claudia Grigorievna Gulenkova. Later they were continued by her relatives.

In the following days, viewers will see an adventurous comedy about Six Dishes from One Chicken and the familiar Nosferatu. The tour of the “Engagement” theater will end with the premiere performance “The Edge”. The author of the dystopian play is the playwright Valery Shergin.