The other day in New York, two of the largest auction houses earned more than $ 2 billion. Today, all attention is focused on London, where the new auction again promises to break the sky-high records of the cost of paintings.

Picasso became the “winner” in New York, whose painting Les femmes d’Alger (Version ’O’) was sold for $ 179.4 million at Christie’s. Note that in three days of bidding, Christie’s was the first auction house to earn more than $ 1 billion from the sale of art. If Sotheby’s revenue is added to this amount, the total figure will exceed $ 2 billion. 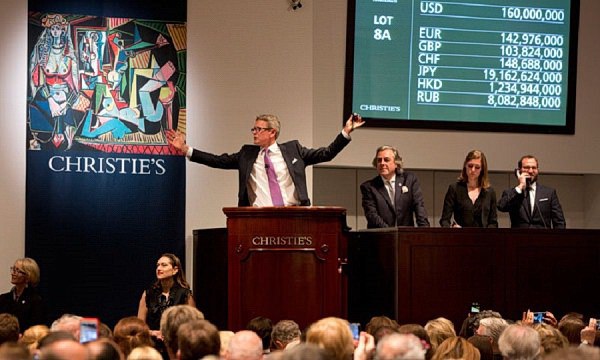 “We have entered a phase that I can truly call the masterpiece market,” said Katharine Arnold, curator of Christie’s Post-War and Contemporary Art. - “Thanks to the paintings of Francis Bacon, Yves Klein and Gerhard Richter, 76 lots are estimated at 132-187 million US dollars.” In addition to those mentioned, auctions offer to purchase paintings by Chagall, Picasso, Mans, Monet, Gauguin and even rare works by Klimt. And there is every chance that revenue will again exceed a billion US dollars.

Katarina Arnold pointed out an important aspect: the rapid rise in the price of fine art provides an influx of new paintings to the market. “There are works of art that first appear on the market, some objects have been stored in family collections for 60 years or more,” she says. Among them, for example, are works of the same Bacon.

“Bacon is an artist whose work market has grown substantially over the past 10 years,” says Sliby’s senior contemporary art specialist, Oliver Barker. “I think that he has now become one of the absolute icons of the last part of the twentieth century.”

While auction houses, as a rule, see nothing but blue skies and higher prices, outside observers in the art market suggest the influence of external factors, such as Greek default or the decision of central banks to raise interest rates, which made art attractive for investment niche and significantly changed this market.