On December 6 at 12:42 pm, as part of the Hermitage Days, with the support of the Committee for Culture of St. Petersburg, a large-scale online project “Alexander Nevsky” was launched. 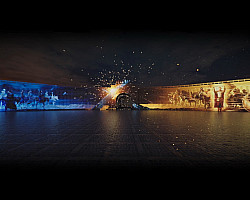 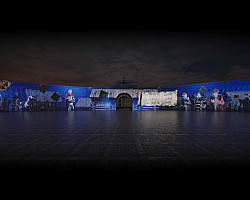 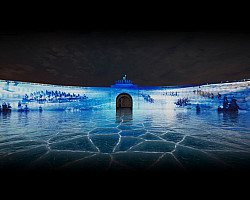 Its central part was a 12-minute spectacular video mapping dedicated to the Grand Duke and his legendary battles. This time, the project, born at the intersection of 3D-mapping, VR and cinema, appeared as a full-fledged product of high technologies: even the virtual facade of the General Staff building served as a screen for it. For three days, the unique online performance has gained over 5 million views on the Internet.

The Alexander Nevsky project invites everyone to take a virtual journey through the space of culture and history of our country. You can immerse yourself in the atmosphere of Ancient Russia in the XIII century and learn a lot of new things at any time and from anywhere in the world.

Visitors will be able not only to see a stunning 3D performance: the site is a full-fledged information and educational resource containing short but capacious and fascinating articles and materials dedicated to the fate of the Grand Duke and his great family, his mission and his image in the spiritual and cultural heritage of Russia… In the interactive part of the portal, you can go through a quest on knowledge of the history of Ancient Rus, as well as explore a map that will allow you to step by step through the key moments of the battle on Lake Peipsi together with the army of Alexander Nevsky.

It is also possible to organize an individual display of the Alexander Nevsky VR video mapping directly from Palace Square - on the living facade of the General Staff building in augmented reality. Moreover, at any convenient time - without restrictions, without the risk of being late for the show or being in a crowd of people. To do this, you need to download the application "Land of Light VR" (it will take less than a minute): you can do this both on the website stranasveta.com and directly on the Palace Square (the information structure with the code is located near the Alexander Column).

Three-dimensional objects will "go out" beyond the impromptu "screen" and create separate living canvases: you can feel how waves are splashing in the immediate vicinity, ice is cracking, flocks of ravens are circling and scattering, fiery sparks are falling from the feathers of prophetic birds…

For those who are just going to come to St. Petersburg (for example, on vacation), or for some reason cannot plan an offline walk, the "Country of Light VR" application provides a remote viewing option. It will allow viewers to travel to the heart of St. Petersburg, to be on the virtual Palace Square and enjoy the spectacle, changing the point and angle of view depending on the position of the camera.

The project was implemented by ANO "GALA-RUS" with the support of the Committee for Culture of St. Petersburg.