Alexander Evgenievich Prostov-Pokrovsky was born in 1951 in Kazan. He graduated from the art and graphic department of the Cheboksary Pedagogical Institute. Graphics, painter, theater artist, worked in the cinema. Alexander Evgenievich has eight performed theatrical productions (stage design and costumes) based on the works of G. Glazov, T. Williams, V. Arro, L. Zhukhovitsky, E. Petrov, E. Hemingway at the Kazan Drama Theater. V. I. Kachalova, Opera and Ballet Theater. M. Jalil and on central television. He has developed over a hundred advertising, theater and film posters, actively collaborates with various organizations to develop their corporate identity (industrial graphics), public relations campaigns, and presentation presentations, including printed materials. For many years, he has been developing interiors as an artist-designer, at the same time participating in their actual performance, including monumental painting, panoramic compositions, lighting effects. 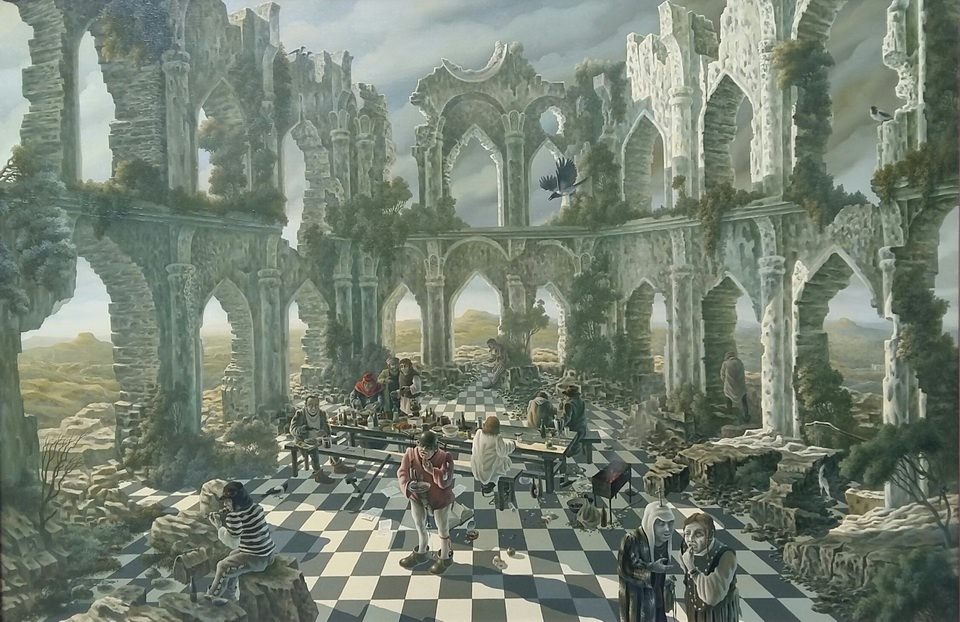 But the main love of the artist in the visual arts is a stylish genre painting, to which he devoted almost thirty years of his life. Seen scenes provoke imagination, imagination - thinking. So thoughts are born out loud, on canvas. The paintings of Alexander Evgenievich are compared with the works of Jerome Bosch, Peter Brueghel and Salvador Dali. Prostov-Pokrovsky is the only Russian artist to have a diploma and a Cup of the International Alliance of Salvador Dali and a gold medal of the European Circle Franz Kafka.

“… In special terms, I don’t think about my work. Yes, and in the classical sense I have very little surrealism… It seems to me that we are talking about a different degree of perception of reality: in my heart there is continuous surrealism. And what is it? This, I would say, is a constant shock at realism. That’s why I came up with a direction - “intellectual realism”…

Alexander Prostov-Pokrovsky participated in more than fifty personal and collective exhibitions in Germany, Ireland, Turkey, Bulgaria, the Czech Republic, Malta, Slovakia, Serbia and Russia. The artist’s works are in the collections of the Museum of Modern Art and the ORIGIN GALLERY in Dublin, the Sprengelmuseum in Hanover, the Academy of Arts. Masaryka in Prague, as well as in private collections in European countries, Russia, the USA, Canada, and Australia.

The exhibition, which presents about twenty works, will last until the end of June 2017.