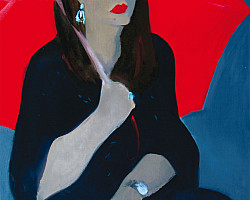 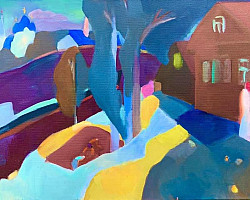 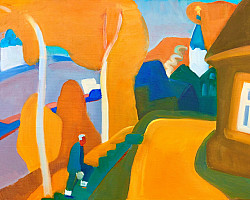 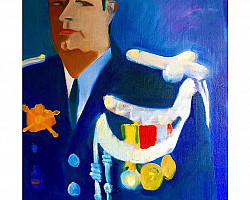 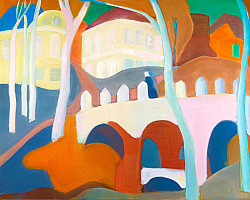 The name of Ilya Komov is well known to Russian and foreign audiences. He is a member of group art projects, more than 50 personal exhibitions of the master were successfully held in Russia and abroad. The exhibition at the Russian Academy of Arts is a new angle of view, a new opportunity to comprehend the nature of the work of this interesting author.

Painting and, first of all, color remains for I. Komov a universal language of communication with the world. States, fleeting impressions, the refraction of light or the play of shadows, complex color combinations are the subject of research and tireless admiration of the master. Researchers call him a true gourmet “of subtle color-plastic nuances and sharp, loud percussive accents. He believes in painting, as great masters of the past believed in it. He writes views of cities and suburbs, river banks, mountain ranges, and in general what can be seen with the eye, and not imagined with the head. He appreciates the Russian foundations and foundations of contemplative, lyrical, but, moreover, decorative, “iconic” writing. " The artist has devoted more than 30 years to the study of painting technology in the restoration workshop of Savva Yamshchikov. Maybe,that is why the color and music of the plastic and compositional structure of his works is so pronounced.

In his work, Ilya Komov relies on the experience not only of the masters of ancient Russian monumental painting, but also of Russian and French art of the first half of the twentieth century. This combination, along with the undoubted gift of a sense of space and pictorial freedom, allows the artist to achieve the imaginative depth and acute emotionality of his works. This inner creative dialogue of eras and cultures is peculiarly accentuated in the exposition of the exhibition, in its landscape part, uniting works created in Moscow, St. Petersburg and the cities of the South of France - the Eastern Pyrenees. Collioure, Ceret - historically these French cities are inextricably linked with the fine arts of the twentieth century, Matisse, Picasso, Maillol, Braque, Derain, Marquet, Soutine, Dufy lived and worked here… In recent years, I. Komov, working in different cities and countries of the world,writes and is regularly exhibited in Ceret. An unforgettable experience for him was the creative work high in the mountains, in the monastery of Saint-Martin-du-Canigou. The works created there are also presented at the exhibition. The landscapes of the Volga and Neva, the canals of St. Petersburg and the Languedoc valley of I. Komov are, according to art critics, almost abstract color "selections". And yet, the artist never sacrifices visible reality, creating images based on a natural impression.based on natural impression.based on natural impressions.

The portraits, which made up the second significant part of the exposition, are also extremely generalized in form, sonorous and emotional in color. Their plastic structure is monumental, the drawing is symbolic and laconic, the color is open. And at the same time, the author’s searches in painting are subordinated to the expression of the psychological depth and individuality of the model, the unique tonality, the lively and quivering essence of the image.

Ilya Olegovich Komov was born in 1965 in Moscow. A graduate of the Moscow Art School and the Moscow State Art Institute named after V.I.Surikov (painting workshop under the guidance of Professor T. T. Salakhov, 1989). Since 1991 - a member of the Union of Artists of Russia. In 2007 he was awarded a silver medal of the Russian Academy of Arts. The artist’s works are in the collections of Russian art museums, in Russian and foreign private collections, including in the collections of the UN Secretary General Kofi Annan, Chairman of the Indian National Congress Party Sonia Gandhi.

The text was prepared on the basis of an article by A.K. Yakimovich, Doctor of Arts, Academician of the Russian Academy of Arts