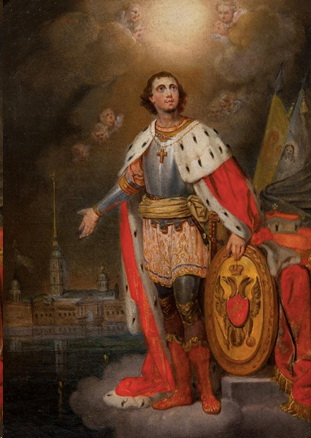 “The years of Alexander Nevsky’s life came at a turning point in the history of Russia, when, after the invasion of Batu, most of the Russian lands were destroyed, and a new threat was approaching from the north and west - the Swedes and the knights of the Livonian Order. The exhibition will show Prince Alexander Nevsky as a wise ruler, fearless warrior and commander, as well as a revered Russian saint, ”says director Alexei Levykin.

Alexander Yaroslavich gained fame after the Battle of the Neva and the Battle of the Ice, not only as a great commander, but also as a brilliant diplomat. He entered into an alliance with the Horde khans aimed at achieving lasting peaceful relations with the Horde, and rebuffed the military-political and religious expansion of the Catholic West, abandoning union with Rome. A vivid illustration of these events is a fragment of the famous fresco by GI Semiradsky "The Blessed Prince Alexander Nevsky Receives Papal Legates" and a copy of his painting "Alexander Nevsky in the Horde", created at the end of the 19th century for the Cathedral of Christ the Savior.

Local veneration of Alexander Nevsky as a saint began immediately after his death. In the 1280s, a Life was written in the Rozhdestvensky Monastery in Vladimir, glorifying the military valor and political successes of the Grand Duke. The exhibition will present a list of this outstanding monument of Old Russian literature, compiled in the 16th century.

The official canonization of the prince-monk as an all-Russian saint took place in 1547 at a church council convened by the Metropolitan of Moscow and All Russia Macarius and Tsar Ivan IV the Terrible. From that time on, the iconographic image of Alexander Nevsky began to take shape. In pre-Petrine Russia, preference was given to depicting the prince in the form of a schema-monk in "prayer" before the Mother of God or the Savior, and in 1724 the Holy Synod decided to depict Saint Alexander Nevsky not in monastic robes, but in the clothes of the grand duke. The icons presented at the exhibition allow us to see how the iconographic image of the holy noble prince developed from the 17th to the 20th century.

In 1725, by decree of Empress Catherine I, the Order in the name of the Holy Blessed Grand Duke Alexander Nevsky, conceived by Peter I, was established. The motto of the award was the phrase "For Labor and Fatherland." In 1942, the Soviet Order of Alexander Nevsky was also established, whose image during the Great Patriotic War became a symbol of patriotism and perseverance. Various types of insignia of the orders, which have changed over time, are also presented at the exhibition.