11 years have passed since my first exhibition in Korea, in the text of which I wrote that I still want to portray much. All these years I have been painting still lifes and landscapes, speaking the language of the objective world.

Pictures with shots from films are a declaration of love for cinema, which, as we were told, is the most important of all the arts for us. Cinema is like life. A filled frame, empty, filled again, then letters, words, captions. 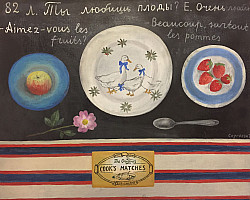 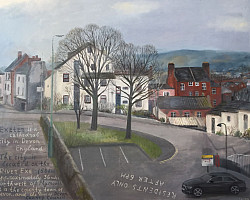 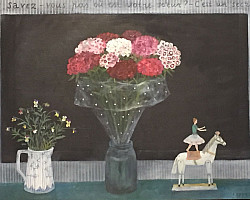 “Book” is a large canvas with twenty vertical pages with the text of the poem by Dima Strocev “Father and Son”, which was written for the film, but was not included in it. The idea came up to make a book of one poem, where the text itself will become the main character in the illustration.

Tatyana Sergeeva was born in Leningrad in 1976. In 2006 she graduated from St. Petersburg State Pedagogical University named after Stieglitz, Department of monumental and decorative painting. Since 2009, a member of the Union of Artists. He has been conducting exhibition activities since 2007. Author and participant of many exhibition projects. Lives and works in St. Petersburg.