Exhibition by Alexei Rychkov "Orthodox Churches of Russia and the World"

The informational-educational and exhibition center of the Kaluga Museum of Fine Arts (Lenin 103) will host the grand opening of Alexey Rychkov’s exhibition “Orthodox Churches of Russia and the World”. 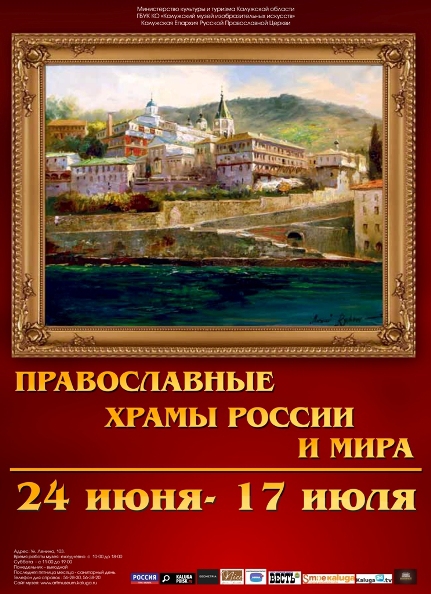 The exhibition “Orthodox Churches of the World” presents about 60 works. The canvases made in oil technology depict monasteries and churches of Georgia, Abkhazia, Finland, Germany, Uzbekistan, as well as monuments of church architecture in Moscow and various cities of Russia. According to the artist, most of the paintings are written from nature, which allows you to feel the living image of the landscape. Alexei Rychkov (born 1968) is a graduate of the Academy of Painting and Design named after V.I. Mukhina (1993). Already at the beginning of his studies, he collaborated with art galleries in Finland, Poland and Prague. In 1995 he was invited to Paris, where over four and a half years more than 100 works were successfully written, which were successfully sold at auctions and exhibitions of Russian art in Paris. Several paintings of this period were used in the interior design of the Grand Hotel WestMinster (Paris). Having received recognition and fame in Paris, Alexei resumes work in St. Petersburg. In 1999, 7 works of the artist were acquired by the National History Museum of Australia (Sydney). Two years later, a large order was received from the Mountain Museum of St. Petersburg to recreate the lost portrait gallery of the emperors and learned men of Russia. Along with this, the artist creates a series of landscapes with views of the Museum. In 2002, at the Representation of the Russian Ministry of Foreign Affairs in St. Petersburg, the exhibition "Portrait Art" was opened with the participation of works by Alexei Rychkov. Later, the Foreign Ministry will acquire a picture of the artist for her solemn presentation at the UN Palace Koffi Anan. In 2003, Alexey participated in the campaign "300th Anniversary of the Summer Garden" held by the Russian Museum, where he received the Grand Prix. In the same 2003, the artist creates a series of canvases dedicated to Russian ballet. Some of the paintings were presented at the exhibition “Ballet. Ballet? Ballet! ”In the gallery“ PAR ”(Zurich, Switzerland). In 2006, Alexei took part in the competition of marine painters (Ethnographic Museum (St. Petersburg). Three works were purchased by the founders of this exhibition (Germany). To date, the work of Alexei Rychkov has been presented in museums, personal collections and galleries in St. Petersburg, Moscow, Prague, Paris, as well as Australia, Germany, Switzerland, USA, China.