The project is dedicated to the visual comprehension of the industrial aesthetics of steam locomotives as symbols of high-tech movement.

From November 15, 2020 to January 31, 2021, an exhibition of works by industrial photographer Artyom Vasilkov "Hero-locomotive" will be held in the Gallery of Classical Photography.

The opening of the exposition is timed to coincide with the publication of the book Heroes of the Steam Locomotives.

The goal of the project is to convey the image of the railway industry, which is based on the inextricable link between a steam locomotive and a person. On the one hand, the exhibition includes images of unique locomotives that are of great interest not only from the point of view of their historical value, but no less aesthetically, as combinations of bizarre textures and rhythms that capture the imagination. On the other hand, an integral part of the project is the portraits of unknown heroes of the railway industry, whose dedicated work and enthusiasm allow maintaining the smooth functioning of the railways, without which the daily life of modern society is unthinkable. Thus, both components of the project create a realistic picture of the unity of the power of metal and physical strength, combined with the firmness of a person’s character,which reflects the essence of the concept "locomotive". 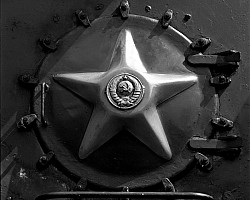 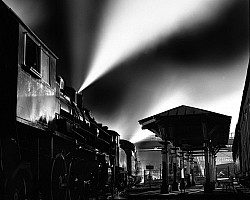 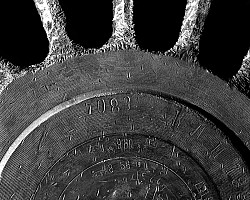 Artyom Vasilkov has been engaged in historical and artistic research of the "steel age" for more than ten years. His acquaintance with the world of operating steam locomotives began in 2016 at the Podmoskovnaya depot of the Moscow Railway and the Moskovskaya Sortirovochnaya depot in St. Petersburg. Thanks to the assistance of the staff of LLC “ZhD Retro-Service” and the locomotive crews of JSC “Russian Railways”, extensive photographic material was filmed in three years. The filming process would not be complete without a deep study of the structure of steam locomotives, their driving techniques, touching the secrets of the craftsmanship of unique specialists, restoring and activating powerful ancient mechanisms. Thanks to them, almost all locomotives and their units presented in the project are working, that is, they function properly to this day.

In Russian art, the theme of the role of industrial facilities has been actively developing since the 1920s, when the future classics of Soviet constructivism L. Lissitzky, A. Rodchenko, B. Ignatovich and others created their masterpieces. The variety of Russian steam locomotives and the history of domestic steam locomotive building are poorly researched and even worse shown to the general public. The extraordinary beauty of the steel giants and their functional aesthetics have not yet been fully appreciated in the art world.

“Artyom Vasilkov’s project restores an unfair lack of attention, both to the art of steam locomotive and to the harsh aesthetics of steel mechanics. The brilliantly rendered photographs taken with half-format and format cameras reveal the beauty and hidden power of the huge mechanisms. The works of Artyom Vasilkov are a harsh male photography that creates the most valuable thing in art - the mood and attitude towards what is being contemplated. The elegance, detail and integrity of good-quality photos deserve the most careful attention, and the author - unconditional praise. I hope that after watching this album, a long aesthetic trace will remain in every head, which will show the world of steam locomotives in a completely new light, ”says evolutionary scientist, photographer Sergei Savelyev.