On October 12, in the Gala Hall of the Book Palace, the opening of an exposition dedicated to the great Russian naval commander took place.

The exhibition acquaints visitors with the main milestones of the life path of Theodore Ushakov, glorified by the Russian Orthodox Church in the face of saints, his victories and the chosen monastic path at the end of earthly life. The exhibition features more than 20 rarities, including battle maps, rare photographs, awards, and other items.

The exhibition was prepared by the Center for Cultural Cooperation named after St. Spyridon of Trimyphuntes together with the Russian State Military Historical Archive and the Rybinsk Museum of Admiral F.F.Ushakov. The organization of the exposition in the Ulyanovsk region was supported by the Simbirsk Metropolis and the Ministry of Arts and Cultural Policy of the Ulyanovsk Region.

As part of the opening ceremony, Metropolitan Anastasiy of Simbirsk and Novospassky held a prayer service. “It is necessary to adopt the experience of previous generations, which in their affairs turned to the Providence of God. Such a man was the righteous warrior Theodor Ushakov. Today is truly a landmark event in our city. This exhibition is grace for the land of Simbirsk, ”the bishop of the Russian Orthodox Church addressed all those present.

Vladyka also emphasized that Saint Theodore Ushakov was not only a talented military leader, but also a highly moral person, an Orthodox Christian. Deeply believing, fearless and invincible - the qualities that enabled Theodore Ushakov to become an unsurpassed naval commander and a real person. 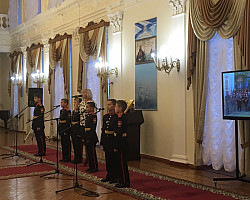 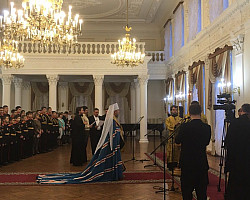 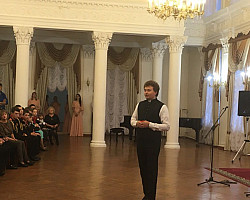 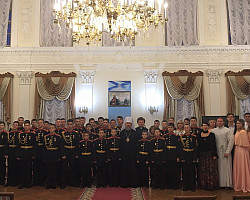 Pavel Karpukhin, organizer of the exhibition, president of the Center for Cultural Cooperation named after St. Spiridon Trimifuntsky noted: “The image of Fedor Ushakov, the builder of his own soul, navy, state, is a true role model. The exhibition is presented at the best venues in the regions. We drove over 12 cities of Russia and saw the reaction of young people. And, indeed, she is interested in her story, the personality of a righteous warrior. We hope that the same interest will appear among Ulyanovsk residents. The region has many points of contact with the naval theme. There are many people who served in the Navy, including the head of the region, the Governor of the Ulyanovsk Region Sergey Morozov. ”

Cadets of the Ulyanovsk Suvorov School, students of the theater department of the School of Arts named after M. A. Balakirev, choir singing ensemble "Accent", professional vocalist and deacon of the Orthodox Church Sergey Gorokhov, creative groups of the region took part in the solemn event marking the opening of the exposition.

It is worth noting that during the opening ceremony all visitors were given an exceptional opportunity to bow to the image of the holy righteous warrior Theodore Ushakov with a particle of his relics.

“I am sure that the organized exhibition will arouse great interest among the population of the Ulyanovsk region and will contribute to the moral and patriotic education of the young generation. Residents of the region will be able to discover the unique aspects of the personality of the holy righteous warrior Theodore Ushakov, his feat and the versatility of his personality, ”said the Minister of Art and Cultural Policy Evgenia Sidorova.