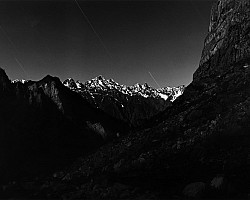 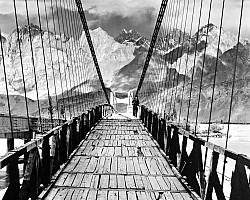 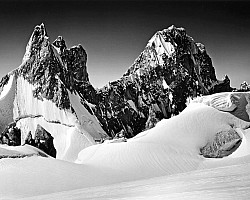 The purpose of the exposition is to show "the peaks that no one has been to."

From January 9 to February 23, the Khan Valley photo exhibition will take place in the Gallery of Classical Photography.

The photographs presented at the exposition were taken by Russian climbers Konstantin Markevich and Anton Ivanov in August 2019 during an expedition to the Khan Valley in northeast Pakistan - one of the few remaining “blank spots” on the map.

Today there are fewer and fewer unexplored places on Earth, however, climbers inspired by a thirst for discoveries prove to us that on the planet you can still find little-studied places and peaks that "no one has been to" before.

During the expedition, the team managed to explore the little-known mountain region and make three first ascents to the peaks of Ilford Peak (Hasho Peak II) 6080 meters high, Tangra Tower - 5820 and Trident - 5780 meters.

The Khan Valley is still one of the least explored areas of Pakistan, and we are aware of only a few successful expeditions and ascents in this region that were completed in 1990-2000. Thus, this expedition became a new stage in the development of this territory.

At the exhibition "Valley of the Khan" photographs of various genres are presented: landscapes, portraits, reportage photographs. All photographs were taken during the month of the expedition on black and white film.

Photographic works for the exhibition are printed manually on silver-gelatin barite paper. The author’s press has artistic and collection value, because in this way the photographer can convey to the viewer as much as possible those feelings and ideas that visited him at the time of shooting.

The objective of the exhibition is not only to acquaint the viewer with the amazing landscapes of the valley and provide him with the opportunity to see one of the most secluded corners of our planet, but also to convey the unique atmosphere and mood of the expedition. To help the audience feel the excitement of mountaineering and understand its essence, show the mentality and life values ​​of people living in those parts. We want to open to the viewer a different world, which is completely different from modern Western reality, and people who, being in harsh conditions, can be happy and live in harmony with themselves and with the surrounding nature.

PARTICIPANT OF THE EXHIBITION, CLIMBER, PHOTOGRAPHER

- Climbing the peak of Ushba Yuzhnaya, 6A (3rd place at the Moscow Championship 2016).

- Ascent to Asan, 6A (Rusyaev’s route, 4th place in the full-time Czech Republic).

- He climbed Mount Elbrus twice with a large format film camera (13x18 cm). The result of these photo expeditions was the personal exhibition “Elbrus. Two peaks ”(2019).