An unknown drawing by Leonardo da Vinci was discovered in Paris

PARIS. Paris is a dream city for auctioneers. The chance to win a jackpot here is high, like nowhere else in the world. A person can just go in from the street and get a pile of drawings from the portfolio, among which there will be a lost job Leonardo da Vinci . This is exactly what happened with Thaddée Prate, director of the old masters department at the Tajan auction house, who announced this Monday about the emergency opening. For the first time in the last fifteen years, a new drawing by Leonardo has been discovered. Tajan experts estimated the work at 15 million euros (about 15.8 million US dollars). A figure about 7.5 by 5 inches shows the martyr Saint Sebastian. 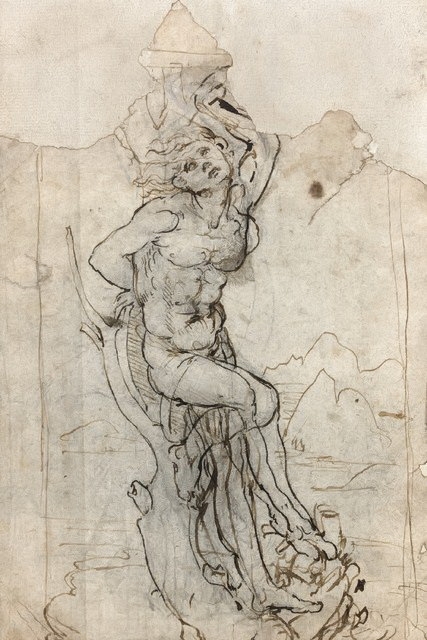 The drawing came to the auction house in March, when its owner visited Tajan with a collection of 14 drawings collected by his father (the name of the owner of the drawing and residence at his request remain in the strictest confidence).

“I had the feeling that this was a very interesting 16th-century drawing that needs further study,” Tadi Prat told a news conference. Prat showed a drawing to Patrick de Bayser, an independent art dealer and an old art consultant. The first thing de Beiser asked was: “Did you see that the drawing was done with the left hand?” Leonardo is known to be left-handed. On the reverse side of the drawing, he found two small scientific sketches, accompanied by a short note. “And then I asked: can you believe that it is Leonardo? That would be too unbelievable, ”recalls Prat.

To clarify the authorship, Tajan was invited to consult Carmen C. Bambach, curator of the department of Italian and Spanish drawings at the Metropolitan Museum of Art. Dr. Bamback was the organizer of the 2003 Leonardo da Vinci, Master Draftsman exhibition, the first in America to present a comprehensive chronological review of the artist’s work on paper and the results of two studies of the museums in Hamburg (Germany) and Bayonne ( France). The research concerned a series of eight drawings by St. Sebastian made by Leonardo in his Codex Atlanticus, which is stored in the Library of Ambrosiana (Biblioteca Ambrosiana) in Milan.

“My eyes popped out of their sockets,” Dr. Bamback said in a telephone interview, recalling his first look at a drawing in Paris on the last day of March. “It definitely complements St. Sebastian of Hamburg,” she added, referring to the ink used, and the saint’s pose tied to a tree, and the elements on the back, and the handwriting that the inscription was made on. “Authorship is undeniable, even if the drawing does not have a history of ownership until the twentieth century. This is an exciting discovery, ”continued Dr. Bamback.

In her opinion, the discovered pattern is the best option known. The drawing, located in Hamburg, is made with the same ink. The drawing from Paris is made in two shades of ink, the pose of the saint is slightly changed, and a mountain landscape is drawn behind him.

“My heart always beats faster when I think about this drawing,” says Dr. Bambak. “He shows so many ideas, so much energy in the way Leonardo explores the figure, and frantic spontaneity. It’s like looking over your shoulder. ”

Dr. Bambak estimates the date of creation of the drawing by 1482-85 years. At this time, Leonardo lived in Milan and wrote the first version of The Virgin of the Rocks, which is now in the Louvre.