La Bella Principessa: a drawing attributed to Leonardo continues to keep its secrets

The boasting of the forger Shaun Greenhalgh that he made this drawing may be fantasy, but also the statement that the work belongs to the great Leonardo , causes no less doubt among experts. 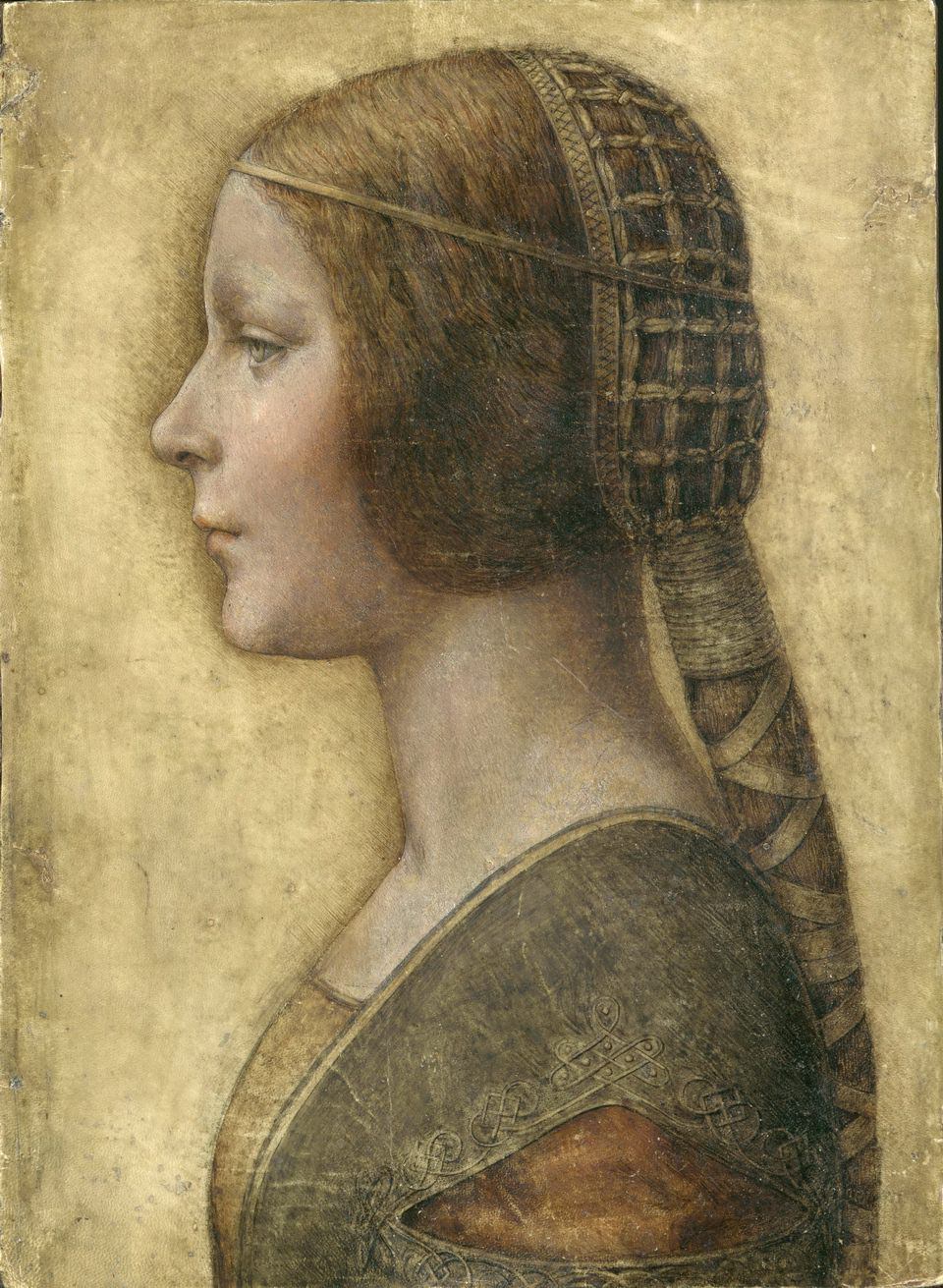 “To look at some of my works in the early 1980s - late 1970s, the time when, I think, I made my best paintings, although I was still very young, is always nice. They look better than I remember them. ” With this innocent passage from his memoirs, A Forger’s Tale, Sean Greenhelg opened a new chapter in the discussions around La Bella Principessa, a drawing known worldwide for its scandalous history.

After a series of experts attributed Leonardo da Vinci in 2010, Greenhalg suddenly announced That drawing is his handiwork. The statement of the forger looked very convincing, especially against the background of endless claims and disputes over the attribution of the picture.

Greenhelg, a man from Bolton, in the north of England, literally stunned the world with his fakes. In 2007, he was sentenced to prison, where he began work on his book. Published last December, written easily and with humor, it tells the story of a shy young man, a great inventor and technical genius, who sold compelling imitations to local dealers without even realizing that they would later be resold as originals at a much higher price.

A striking variety of his works was made public during the trial. But the news of another “masterpiece”, however, was a big surprise for everyone. Grinhelg explained that he decided to publicize his authorship after reading La Bella Principessa: the Story of the New Masterpiece by Leonardo da Vinci, written by Martin Kemp. He was amazed to see his own work on the cover and was shocked at the estimate of $ 150 million given to the figure. “I drew it in 1978 when I worked at Co-Op [the supermarket chain] in Bolton,” says Greenhalg. The model, he said, was a girl named Sally, who worked with him. Could the Italian princess Leonardo actually be the Sally girl from Co-Op? Unfortunately, despite the wide coverage in the British press, not a single photograph of the young lady mentioned was published, and her very participation in this story was not confirmed by anyone other than Greenhalg himself.

According to Greenhalg, he painted La Bella Principessa at the age of 16 or 17, on a rather large piece of parchment, which he found in a local antique store. “The first thing to do was age the foundation,” Greenhalg writes. Parchment looked too “new” for something old, so he made a drawing on its back. “The texture is clearly visible on the back,” he says. The counterfeiter tinted the base, and the figure itself was made using black, white and red natural pigments. He claims that he was not inspired by “any particular work,” but admits that he was trying to do “a little for Leonardo.” Since da Vinci was left-handed, Greenhalg turned the canvas clockwise to perform hatching (a technique known to counterfeiters for many centuries). Greenhelg attributed this work to a Harrogate dealer in 1978.

In his book, the falsifier points to his own mistakes: “Despite the fact that I am not a professor at Oxford, I could list countless reasons why this picture could not belong to Leonardo.” Kemp, whose position at Oxford so impressed Greenhalga, finds “this extraordinary assumption is very funny… We are asked to believe that the 17-year-old self-taught was capable of such exquisite work.”

Co-author of Kemp’s book, Pascal Cotte, calls the falsifier’s story “inept” and claims that “he gleaned data from our book but missed some of the information” published in the Italian edition. “For example, he doesn’t mention the yellow pigment mixed with the Arabian gum of the base layer, or the lead-white glare.” Cott also counted the number of muscles involved in the drawing to demonstrate that the lines would be different when the hatching is done left or right by hand.

More importantly, Greenhelg’s facts contradict the story told by the previous owner of the drawing, Jeanne Marchig, who transferred him to Christie’s in 1998. She claimed that she inherited a masterpiece from her husband Giannino Marching, a popular restorer in Florence. “When they moved to Geneva in 1961, Jenny hung a drawing in her office,” said Les Ward, a close friend of the family. However, the Machinges apparently never paid any real attention to the drawing. They were close to the great scientist Bernard Berenson, who worked as a curator of the museum in Florence, but no one ever mentioned the drawing. There is also no documentary evidence of its existence, although Leonardo was a famous artist, each step of which was captured and commented on. This led some to suggest that Giovanni Maching, an experienced artist and teacher of drawing, may have painted it himself.

Kemp and Cott’s reputation was threatened in 2010. Klaus Albrecht Schröder, director of the Albertina museum in Vienna, told ArtNews: “The painting was examined by our research center, our curators, our restoration department and the Academy of Fine Arts. No one is sure it is Leonardo. ” Carmen Bambach, curator of the drawings department at the Metropolitan Museum, shared her point of view: “It doesn’t look like Leonardo at all.” The cautious keeper of prints and drawings at the British Museum, Hugo Chapman, insisted that “there are about 5,000 famous drawings created by da Vinci, and not one of them is made on parchment” (Kemp claims that there are some). But the deadliest evidence came when the drawing was categorically rejected by the National Gallery in London in 2011. At this time, the gallery was preparing a large retrospective of the works of Leonardo. “We never had any doubt that the so-called Principessa could not be placed side by side in Leonardo’s masterpieces,” says Arturo Galansino, co-curator of the exhibition. “At the scientific symposium, which then took place in the gallery, no one defended this work. Even Carlo Pedretti, an expert on Leonardo’s creative work, who a year before had talked about drawing as a possible major discovery, said that he never cast aside the idea that it might turn out to be a fake. ”

For the first time, the world spoke about drawing in 2008. Bernard Darties, head of relations with the French police, said that one of his contacts in the dealer community made an extraordinary discovery. In fact, Peter Silverman does not like being called a dealer. Tall, elegant and always amiable, he lives in an apartment in the rich district of Paris, full of classic paintings and sculptures of the Renaissance. He was very happy and called the find "the discovery of life" - a portrait of a lady in profile, whose "sculptural classicism" and "purity of the line" allowed him to attribute this work to Leonardo.

Doubts about the authenticity arose almost immediately. Among other technical aspects in the drawing, strokes that never cross the face line look too meticulous, far from Leonardo’s free movements. The origin of the drawing was also covered in secrets. Silverman said that he found him by accident, in Switzerland. Allegedly, he was relaxing with friends and when he needed a phone, he accidentally opened a drawer. “My heart pounded wildly,” he later said. “I recognized the Florentine style and the hand of Leonardo. It was a flash. ”

However, this seductive tale has nothing to do with the truth. The person who felt the “flash” actually acquired a picture from the owner of the New York gallery Kate Ganz (Kate Ganz). At that time he was attributed as the work of a German artist of the XIX century, "stylized" by Leonardo. The deal amounted to 19 thousand US dollars. In July 2008, Simon Hewitt in Trade Gazette Antiques trumpeted the story of the opening of the new Leonardo. The Sunday Times was followed by an article titled "Da Vinci’s painting, worth £ 100 million, kept in a drawer." The amazed Hans immediately provided invoices that explained that she had bought the drawing for 22 thousand US dollars ten years earlier at Christie’s auction from the very same Jenny Maching. When the story went public, Silverman claimed he wanted to protect the Hans’s reputation: “I felt sorry for Kate, which Leonardo did not recognize, and I did not want to embarrass her. I decided to act like a gentleman. ”

The story of Leonardo’s new work was gaining momentum in the media. Dealer Simon Dickinson found that “it’s relatively reasonable to estimate a figure of $ 100 million.” Silverman spared no money, trying to verify the authenticity of his masterpiece. Received in 2009, the positive opinion of Martin Kemp was a major breakthrough. Other confirmations came from experts from Florence and from Nicholas Turner, a former curator at the Getty Museum. Silverman was going to offer Kemp to head the Institute for the Study of the Renaissance in a manor near Florence, to which the professor responded with outrage, as he considered him a kind of veiled bribe. At the London symposium, Kemp said that "the main problem with this drawing is that it belongs to Silverman."

However, Kemp and Kott fought their teeth and claws to defend their findings and refute any conflicting facts. They determined that the drawing depicted Bianca Maria Sforza, the niece of the Duke of Milan, and considered that the sheet was cut from a book printed on parchment and dedicated to the glory of the Sforza dynasty La Sforziada. Pascal Cott discovered perforation on the left edge of the parchment. Using macrophotographs, he came to the conclusion that the dimensions of the portrait sheet “differ very slightly” from the folios of the book, and the three holes “correspond very closely” to the tracks from the firmware. However, it is known that book sheets have five openings, not three, and these openings are explained, first of all, by the results of restoration. Kemp then discovered "extensive damage along the left edge" that could explain the missing holes.

Even though the book was not mentioned in any inventory, and no one had ever heard of the precious drawing made in chalk and placed in the book, both researchers were “almost sure that the portrait was made for La Sforziada, which was printed in honor of marriage Bianchi in 1496. " Later, Kemp and Cott nevertheless removed the reference to the book as "unconvincing."

But what about the drawing? With each new chapter, this story becomes more and more confused, and the characters seem more and more eccentric. However, the longer the debate lasts, the less likely it is that La Bella Principessa will someday hang in the Louvre next to Leonardo’s other masterpieces.