NEW YORK. The story was made before our eyes in the halls of Christie’s auction on Wednesday evening, when Salvator Mundi (circa 1500), considered the last work Leonardo da Vinci , in private hands, was sold for $ 450 million, making it the most expensive deal on the art market of all time. It was bought by the client by telephone at the auction after a 19-minute session, in which five participants participated, four remotely and one was present in person in the hall.

This amount is $ 150 million more than what was considered the previous record sale when Kenneth Griffin bought the “Change” Willem de Kooning (1955) from David Geffen for $ 300 million in 2015. And before that, Pablo Picasso’s “Women in Algeria (Version O)”, 1955, which went to Christie’s auction for $ 179.4 million in May 2015, had a record for work sold at auction. 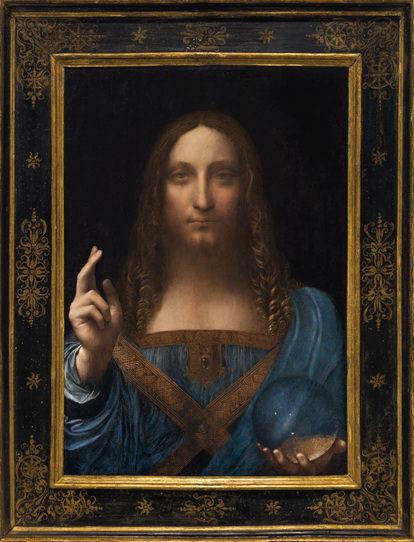 This lot accounted for more than half of the total bid for the evening, which reached 785.9 million US dollars. “It’s hard to find words after such an evening,” says Christie’s CEO Guillaume Cherutti at a press conference immediately after the sale, where Salvator Mundi was installed in the gallery behind him, “But, of course, this is a great moment for all art market. ” When asked who acquired this work, Cherutti was again in difficulty to choose the words. “We do not comment on the identity of buyers, I’m sorry,” he said, adding: “Suggestions came from all over the world.”

There was no doubt that from the very beginning it was an auction that was watched not only by market players and analysts, but also the world as a whole. Television cameras dotted the area outside the Christie’s Rockefeller Center headquarters. The show attracted the largest art collectors in the world, such as Steve Cohen, Eli Brod, as well as musician Patti Smith and actor Leonardo DiCaprio.

Bidding began with the work of artists rare for auctions such as Adam Pendleton and Phillip Parreno, who also went well above their preliminary high ratings, also recording auction records. Besides Parreno and Pendleton, and, of course, Leonardo - other artists who achieved auction records were Vija Selmins, Isamu Noguchi and Kerry James Marshall.

And then came Salvator Mundi. Auctioneer Jussi Pilkkanen spoke about the history of ownership, incl. that the picture was previously in the collections of the three kings of England. For the first time, the work was sold for only £ 45 at Sotheby’s in London in 1958 - then no one believed that it was related to Leonardo. Later, “Salvator Mundi” was considered a copy of the lost Leonardo and in another auction house in 2005 it was sold for less than $ 10,000. Swiss art investor Yves Bouvier later bought it for $ 80 million, when the name of the author of the work, Leonardo da Vinci, appeared in the attribution. The last (until yesterday) owner of this picture, Russian billionaire Dmitry Rybolovlev bought it from Yves Bouvier for $ 127.5 million, but quickly realized that he overpaid several tens of millions and filed a lawsuit against the dealer, accusing him of overpriced prices a number of transactions for a total of 1 billion USD.

Bidding began at 70 million and stopped at around $ 400 million. The buyer will also pay $ 50 million in commission (buyer’s premium).

“We witnessed the story,” said after the sale, Brett Gorvey, the former chairman of Christie’s, who now runs the Levy Gorvey Gallery. “When was the last time? Rembrandts in the 1950s? Van Gogh in 1990? ”He had in mind 82.5 million dollars (157.6 million if adjusted for inflation) paid by Japanese business manager Ryuya Saito for Van Gogh’s Portrait of George Gache.

“These auctions set a whole new height for the art market,” said dealer Tony Shafrazi. Collector and dealer Helly Nahmad clarifies: “The buyer, whoever he is, would spend a billion on this picture. They just weren’t going to stop. ”

In conversations after the auction, more often than not, assumptions about a potential buyer sounded the name of Microsoft CEO Bill Gates. Earlier, he bought a set of scientific letters from Leonardo da Vinci, known as the “Codex of Leicester” for 30.8 million. This also happened at Christie’s in November 1994.

Now, the last Leonardo, in a private collection, will be delivered to a place unknown to the public and may not be available to the public for some time.