The world of Doping Pong is incredibly diverse. It is closely linked to contemporary visual culture and pop aesthetics. The first digital works of artists flashed on the pages of fashionable youth magazines “Ptyuch” and “Om”, scattered in the form of postcards in clubs and restaurants in St. Petersburg. The late pictorial period is inspired by a realistic tradition, in which there is a place for both heroism in the spirit of socialist realism and everyday, idyllic romance of the late 60s.

Artists have always turned to sacred images rooted in culture - to fairy-tale characters, heroes of myths or historical figures praised by monumental propaganda. The roots of Doping Pong’s work are obvious, but their perception is always a game with the audience, who will have to figure out where the artists play and where they are quite serious.

The large-scale exhibition Doping Pong was not accidentally called "Our Everything!". Firstly, it reflects the principle of choosing exhibits: in the Erart Museum, the group will present its most popular works, starting with digital art of the late 90s and ending with works in the style of the new Russian romanticism of the 2010s. Secondly, the most famous images of Doping Pong - pioneers, astronauts, athletes - this is really “our everything” in art for several generations of spectators at once.

A visitor to the Erarta Museum will get acquainted with the classics of Russian digital art - the acclaimed "Olympic" series Doping Pong, and see the famous paintings "Pioneer pulling a splinter" and "My Champion". In a separate block, digital painting of the late 90s is highlighted: “Children’s love of airplanes” and “Life Line”, created in collaboration with the Elton John Foundation.

The paintings “Sounds of the Future” and “The Standard Bearer” in the Erart Museum will be presented for the first time in the format of monumental reproductions. Samples of secular iconography, such as a portrait of Yuri Gagarin, will also occupy a prominent place at the exhibition.

In the cinema hall of the exhibition will be a short film "Stalin’s acid." It was shot according to the script of Doping Pong and is the successor of the psychedelic dialogue of Sergei Sholokhov and Sergei Kurekhin "Lenin is a mushroom."

A stylized popular science filmstrip to the music of Oleg Guitarkin (Messer Chups group) will help the audience of the project to compose a complete picture from all stages of Doping Pong’s creative biography.

Exhibition "Doping Pong. Our everything! ”Will work in the Erarta Museum from December 30, 2019 to March 8, 2020. Access to the exhibition is by entrance ticket or free of charge by the Subscription to the Erarta Museum. 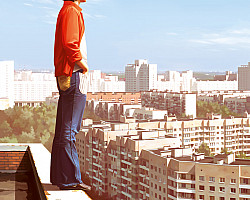 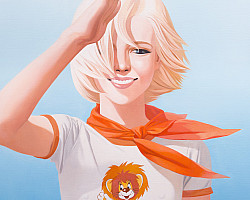 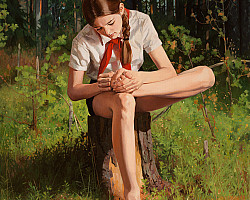 Doping Pong - pioneers of digital art, and now apologists for traditional painting. The art group was founded in St. Petersburg in 1997. It brings together journalist Dmitry Mishenin, artist PostoronnimV and historian Anna Maugli.

Doping Pong designed the first Russian-language edition of the book “Ecstasy” by Irvin Welch, and returned the hero Victor Tsoi in the film “Rashid Nugmanov“ Needle Remix ”to the screens of the country. The art group has repeatedly received awards for achievements in the field of design and for the country’s most innovative website (DIAWARDS, 2004).

The advertising created by Doping Pong for the Olympic village in Sochi made a lot of noise, and its authors were called by the press "ideologists of a new aesthetic totalitarianism", putting it on a par with such bright and controversial artists of Europe as Lars von Trier and John Galliano. Today it is the only Russian advertisement in history disseminated by all Western media from Guardian to National Geographic.

Doping Pong’s "Pioneer Pulling a Splinter", published on Instagram by Juxtapoz, the leading art magazine in the world, has collected more likes than the famous Kaws sculptures.