We will dedicate the exhibition, which was previously moved to autumn, to the brilliant Russian painter of the circle Konstantin Korovin and Valentin Serov and the influential art consultant of Russia at the beginning of the 20th century. Sergei Vinogradov lived at the same time as the hero of our current exhibition, Yuri Annenkov, was a witness to the revolution, but these dramatic events are not at all reflected in his work. The artist painted a different, partly invented life - emphatically light and joyful subjects, bright and pure colors. 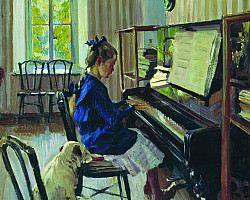 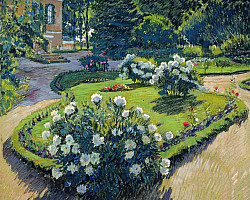 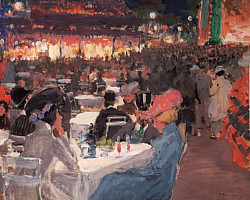 Until now, his work has not been presented so fully. The personal exhibition of Sergei Vinogradov will collect more than 60 works from all over Russia. In addition, for the first time in a long time, viewers will be able to see works from the Baltic States, where the master spent the last 15 years of his life.

The artist seriously influenced the balance of power in the history of Russian art - he took part in the organization of exhibitions of the Union of Russian Artists and the first Exhibition of Russian Art in the USA in 1924, supervised the collections of Mikhail and Ivan Morozov, thanks to which canvases by Monet, Degas, Van Gogh appeared in Russia and other prominent foreign masters.

He was acquainted with Igor Grabar and Sergei Diaghilev, fished with Fyodor Chaliapin, visited the Mamontov family at the Golovinka estate, played cards with Leo Tolstoy. The exhibition will include the works "At K. A. Korovin", "Plays. 1914 "," House in Yasnaya Polyana from the side of the terrace "as a reminder of the artist’s close relationship with prominent representatives of Russian culture.

The curators of the exhibition are Yulia Petrova, director of the Museum of Russian Impressionism, and Olga Yurkina, a specialist in the exhibition department.