"Tank painting. Meditation and philosophy of the East." Exhibition of works by Nikolai Dudko

An exhibition of the works of a member of the Union of Artists of Russia Nikolai Nikolayevich Dudko opens at the Museum and Exhibition Complex of the Russian Academy of Arts. The exposition presents more than four dozen works by the artist, continuing the art of traditional Buddhist painting "tanka". 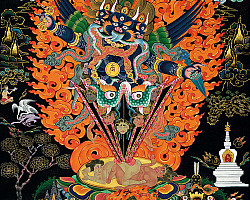 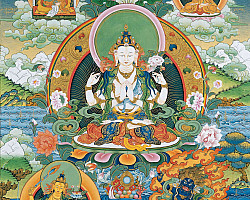 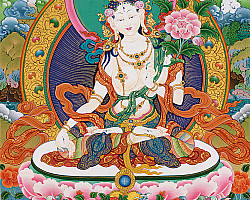 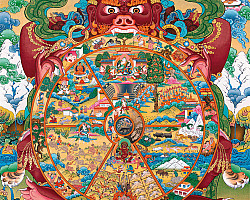 In Russia today there are several masters of this unique and ancient painting, whose works can be found in Buddhist temples, datsans, as well as in private and museum collections. The most famous of them is the tank performer, philosopher and popularizer of Buddhist culture - Nikolai Dudko. Being inextricably linked with meditation practice and religious experience, the tanka requires certain knowledge and preliminary training. Therefore, during the exhibition, the artist will hold for the audience a series of master classes and meetings dedicated to both showing the techniques of various pictorial techniques of the tank, as well as the basics of meditation and philosophy of the East.

Prior to his passion for Buddhist art, Dudko was seriously engaged in painting. In 1982 he graduated from the graphic arts department of the Ulan-Ude Pedagogical College. For some time he lived in Ukraine, studied at the Kiev Art Institute. However, realistic painting did not attract the artist. The desire to find a different path in art led him back to Buryatia in 1986. An important role in the life of Nikolai Dudko was played by acquaintance with the lama of the Ivolginsky datsan Darma-Dodi, the rector of the Tsugolsky datsan Zhimba-Jamso Tsybenov and especially with Chogyal Namkhai Norbu, who became the artist’s spiritual teacher. Faced with the complex world of Buddhist symbols and images of iconographic painting, Dudko turns to the few living masters of Buryatia who have preserved the secrets of traditional art. Trips to Mongolia and Nepal from 1990 to 1995 deepened knowledge of the techniques of religious painting. In less than two years of study (1995-1997) at the Library of Tibetan Manuscripts and Archives (LTWA) in the city of Dharamsala (India), he went through a five-year training course with the personal artist Dalai Lama XIV, Rev. Sangei Yeshe. The result was a diploma of the artist of the Tibetan-style tank Menri with the right to teach.

Making a tank is a complex and lengthy process that requires knowledge, special skills, accuracy and a strict sequence of actions. Before starting to draw a deity, the artist reads the corresponding prayers, plunging into deep contemplation. Painting is performed on a silk or cotton cloth, covered with special soil, which includes chalk or white clay. Paints are powdered and mixed with a bonding base natural minerals such as cinnabar, lapis lazuli, malachite. The process of writing an icon involves several stages: creating a pencil sketch, toning, drawing contours and applying gold. The last and most crucial step in the image of the deity is the image of the face. Particular attention is paid to the eyes: it is they who make the image “alive”. After finishing work, the tank is sewn into a special brocade frame and consecrated by a high cleric. For the most significant icons on the back, inscriptions are made - mantras of invocation, or praise to the deity.

In ancient times, sacred images of a tank (translated from the Tibetan language - a scroll), applied to a piece of cloth, were carried by dozens and hundreds of wandering monks from monastery to monastery. The purpose of such transportation was to help in mastering the basic principles of Buddhist teachings and establishing a connection between the believer and the prototype of the Enlightened One, depicted on the scroll. There is not a single random detail in the painting of the tank, so following the canon is considered so important. Dudko writes as the icon painters of the Tibetan school of Men-ri wrote for centuries (Men is the name of the founder of the school, ri is the drawing). He uses traditional materials - it is linen or cotton fabric, and sometimes, for especially important images, silk. The fabric is stretched on a wooden stretcher, then primed with a special paste made from animal glue and mixed with chalk powder. When the paste dries, the surface is carefully polished on both sides. Due to this, the tank can be twisted and untwisted without any harm to the paint layer. Then ink is applied to the drawing, and only then paints mixed with animal glue and bile by hands, which gives great brightness and color purity. The palette of canonical Buddhist painting consists of five colors: yellow, blue, red, green, white. Each color carries its own symbolism. Red is a symbol of power, blue is space, white is purity, yellow is abundance, green is creative energy. These are the elements that form the universe. From the combination of these basic colors, Buddhist artists manage to get up to twenty-five shades. By combining these colors and shades, Dudko achieves a palette of 85 shades, where each tone also carries its own composite symbolism. The artist works in all varieties of the tank: full-color tank, made in all five colors, including gold; tanka “martan” - a gold pattern on a red background (the canvas is primed with cinnabar), “nagtan” - a gold pattern on a black background; “Sertan” - a drawing on gold (a unique technique that not every artist is allowed to use, because gold is a special, precious offering to the Buddhas); tank on silk: on thin material, usually a yellow hue, ink is first drawn and then dyed. The artist takes up to a year and a half to create multi-figure compositions.