Everything has its own puzzles, and art was no exception. One of the unsolved mysteries is the painting "Gioconda" ("Mona Lisa") by Leonardo da Vinci. 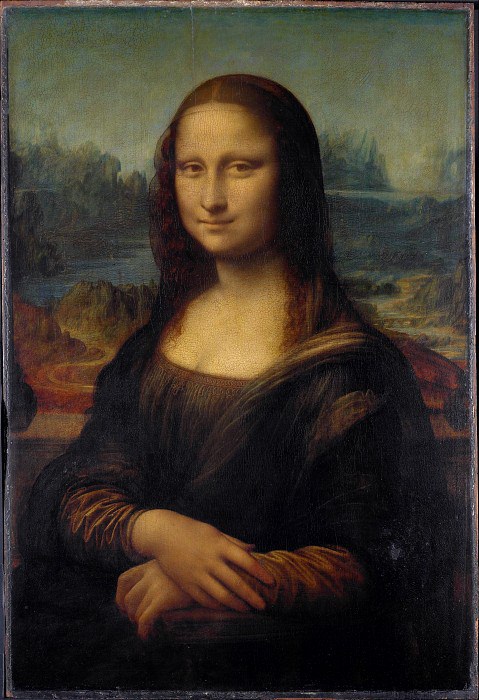 Around her there are numerous discussions regarding the beauty and smile of the character of the picture. All viewers and critics agree on only one thing - the picture makes an amazing and unusual impression. Explanations of a mysterious smile appear very often. There are those who believe that the effect of a flickering smile is associated with the hallmarks of human vision. Others argue that the smile of the picture is obvious when the observer looks at any details of the girl’s face, except for the lips.

Be sure to go to the Louvre, being in Paris, and look at the masterpiece of Leonardo da Vinci. However, try not to be left alone with the picture, because many strange cases are associated with it. Some people felt sad, sad, or started to cry after looking at the picture for a long time. Although it is almost impossible to be alone with this picture today, the hall is usually literally packed with tourists.

Leonardo da Vinci was called up to Rome by Giuliano Medici to paint a portrait of Signora Pacifica Brandano. She was the widow of a Spanish nobleman, with a meek and cheerful character, a good education and was a decoration of society. A workshop was arranged for the artist. The girl needed to preserve the invariable expression of her face, for the sake of this, music was played during the sessions, songs were sung and poems were read.

The portrait was painted for a long time, carefully drawing the smallest detail. Therefore, the girl in the picture looks as if alive. Some people had a feeling of fear that a monster or something else might appear in the picture. The famous smile captivates with its mystery, inspiring an extraordinary sensation, she calls the viewer. Despite this, the picture is replicated in the world more than any other, it is everywhere, including wallpaper for a smartphone (there are such for example appdecor.org )

Many claim that Leonardo himself had a similar smile. This can be seen in the picture of his teacher, where Da Vinci served as a model. It is because of this that some have suggested that the Mona Lisa is a self-portrait of the artist in a female form. A computer comparison of the picture with a self-portrait did not refute this assumption. However, despite this, it is too early to claim that this is a true version.

The fate of Pacifika cannot be called easy. The marriage was short-lived due to the death of her husband, Giuliano Medici did not want to marry his lover, and his son was poisoned. Soon, the Medici had to marry by calculation, he did not want to upset the bride with a portrait of her lover, so Leonardo had to change the picture, which was already finished.

Pachifika had a tendency to attract men and as if to take their lives. There is speculation that her nickname was "Mona Lisa." This word translates as "playing." Signora Pacifika left a mark not only on her lover, but also on the artist, who, after writing the portrait, was getting worse. Da Vinci is starting to feel weird. Apathy, which was not there before, and fatigue are falling upon him. The hand is shaking harder and harder to work.

After completing the portrait and leaving for France, Leonardo created a new palace for the king, but the work was not of the same high level as before. His energy disappeared, apathy appeared. Then for weeks he does not get out of bed, and his right hand ceases to obey. At the age of 67, the artist dies.

Initially, it was believed that the girl depicted in the picture was Lisa, 25, the wife of the Florentine tycoon Giocondo. Actually, that is why the portrait in some albums and reference books had a dual name - “Mona Lisa. Mona Lisa. "

A. Venturi in 1925 admitted that the portrait depicts Constanta d’Avalos - the lover of Giuliano Medici. The assumption was based on the poem of the poet Eno Irpino, but there is no other evidence of the veracity of this version.

Only in 1957 did C. Pedretti propose the idea of ​​Pacifica Brandano. She is considered the most faithful, thanks to the documents and the above circumstances. There is an opinion that Pacifika was an energy vampire. These are people who have less aura than ordinary people, as a result of which they can be absorbers of the life energy of their relatives, causing apathy, weakening of the body and serious health problems. That is why the unusual portrait of Pachyphics affects people who look at him for a long time.

Do not forget about the experiments of Leonardo, who wanted his paintings to evoke strong emotions. He dreamed of making the viewer horrified or, conversely, bewitching him. His knowledge of anatomy, “sphumato”, chiaroscuro, the mysterious smile of a woman in the portrait and the drawing of the smallest details - all this created a living creation.

Destroying the "Mona Lisa Smile" would be a crime, because in the world there are many paintings that affect a person. It is only necessary to take measures so that these paintings influence people less. For example, limit the time spent next to them, or warn visitors.

Of course, there is a certain mysticism in the picture. They also say that if a person is destined to see her, he will see it. Because the "Mona Lisa" never lets go.