Did the Nazis kidnap Mona Lisa?

PARIS. The legendary story of the innumerable riches hidden by the Nazis in alpine salt mines has again stirred up the minds of the public after the recent discovery in a Munich apartment of a magnificent art collection valued at more than 1 billion euros and possibly illegally misappropriated by an art dealer of the Third Reich. 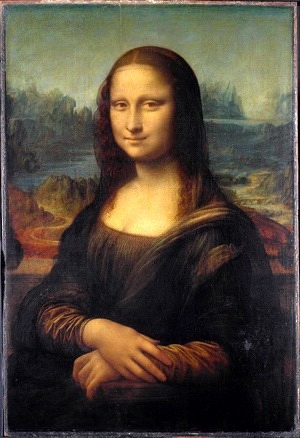 This event, coupled with the upcoming premiere of Monuments Men with George Clooney, Matt Damon and Bill Murray, featuring a group of experts looking for Nazi-stolen works of art, paved the way for us to remember how lucky we were. that so many masterpieces of painting survived the Second World War.

The Nazi party created a special unit, the "Operational headquarters of the Reichsleiter Rosenberg for the occupied regions" (ERR - Einsatzstab Reichsleiter Rosenberg), whose goal was to prevent the destruction of cultural property and their subsequent confiscation. This unit was responsible for the theft of a huge number of paintings from Louvre Museum , Uffizi galleries, countless churches, galleries and private collections.

One of the most famous works of art stolen by the Nazis, perhaps, was the statue of Michelangelo’s Bruges Madonna and Ian Van Eyck’s work “Adoration of the Mystic Lamb”, both of which appear in the film “Keepers of Heritage”. In addition to them, there were many other, less well-known pearls, which, nevertheless, took their place in the hearts of art lovers and collectors around the world. Some facts of Nazi looting were disclosed and made public, but much more of them is still a mystery.

The most mysterious story of this tragic episode in the life of many masterpieces of world painting is the fate of the most famous painting in the world. There is a version that the famous "Mona Lisa" by Leonardo da Vinci was discovered along with other treasures in the Altaussee salt mine in the Austrian Alps, which the Nazis turned into a secret shelter of their wealth.

The painting “seems” was found there, but this story is replete with contradictions, and “Mona Lisa” is not mentioned in any wartime document. The very possibility of such a finding began to be discussed by scientists only after the discovery of post-war reports on the activities of Austrian double agents who worked on the side of the allies, whose task was to detect such "secret" mines. The report said that the team “saved such priceless objects as the Mona Lisa from the Louvre.” A second document from an Austrian museum located near Altaussee, dated December 12, 1945, emphasizes that “Mona Lisa from Paris” was in one of “80 wagons of art and culture from different countries of Europe” that arrived at the mines.

Meanwhile, the Louvre itself for a long time kept a strange silence about the location of his treasures during the war. Finally, after many years, the museum’s directorate admitted that the Mona Lisa was indeed in the Altaussee mine.

But why then there was not a single mention of her in the documents of the Third Reich? The only surviving wartime document about the fate of the painting says that on August 27, 1939, the masterpiece was packed in a specially marked double-walled poplar box made to order back in 1938. It was deposited at Chambord Castle in the Loire Valley, along with other works of art from the national museums of France. On June 5, 1940, the canvas was again secretly transported, now separately from the rest of the collection, by ambulance. In September of the same year, Mona Lisa was again moved to the Museum in Montauban, and a little later, to Montal (in 1942). According to the official version of the Louvre, "Mona Lisa" was not part of the works from the museum’s collection, which were stored in the Chateau de Pau, at the foot of the Pyrenees.

The latest Louvre document talks about the safe return of a masterpiece to Paris on June 16, 1945. It was on this day that the opening of the treasury of the Altaussee mine was announced. But how did the painting get to Paris that very day? Could she secretly be taken out of the mines even before the treasure was discovered by the authorities? Intentionally or not, but the period of the “life” of a world masterpiece from 1942 to 1945 is not documented anywhere and remains a mystery.

Later, the Louvre changed its version, arguing that the Mona Lisa painting found in the mine was only a good copy, made during the lifetime of Leonardo da Vinci. Such copies do exist. But nowhere else is it mentioned whether such a copy was found in the Altaussee mine.

The Louvre, in turn, now claims that that copy of Mona Lisa was among the several thousand works of art collected at the National Museum of the Restoration, which house cultural property whose affiliation to a particular owner cannot be established. Allegedly, it was the copy of the painting found in the mine that was listed on the museum’s list under number 265. After 5 years, during which the master of the painting was never found, the painting was sent to the Louvre for unlimited storage. From 1950 and until recently, she hung near the office of the director of the museum.

Having gathered all the facts together, you can try to determine what really happened. "Mona Lisa", of course, would be a key goal for Nazi art hunters, both for Hitler himself and for the "art villain" number two, Hermann Goering. The Nazis would search for "Mona Lisa" without rest, from the very moment they entered Paris. Since there are almost identical copies of Leonardo’s paintings, it would be strategically desirable for one of them to be placed in a specially marked wooden box with the inscription “Mona Lisa” and sent to the store. Whereas the original itself would be secretly hidden. It is likely that it was this copy, labeled “original”, that the Nazis captured and sent it to the Alps, and the original itself most likely never left Paris until its triumphant return to the Louvre on June 16, 1945.

This is the only way to explain that a copy of the original painting (No. 265), hanging in the administrative premises of the museum, was indeed returned from Altaussee. This also explains why Mona Lisa did not appear in the documents drawn up by the Nazis - perhaps some officers suspected that the picture was not real, while others were sure that it was an original. The organization of the abduction of a copy would also be a very smart move, because otherwise, the Nazis would not stop at nothing to find a legendary masterpiece Leonardo da Vinci .