After a year of research, the famous American artist Jenness Cortez announced the completion of her restoration work. Leonardo da Vinci " Mona Lisa "In the form that the picture could look at the time of its completion, at the beginning of the XVI century. The restoration was commissioned by a private American collector. In her work, Genes Cortes used a copy of the Mona Lisa, owned by the Prado Museum, and data from the French Restoration Research Center, published in 2004. In addition, the artist independently analyzed a large amount of historical data about the painting and its copies made by contemporaries of Leonardo da Vinci.

Information and photos (below) were taken from the Perlmutter Gallery website: http://www.perlmuttergallery.com/mona-lisa/

After completing the work, Genes Cortes noted that she does not claim to be completely similar to the original of the 16th century: “I do not claim to be equal in skill with Leonardo. But I put all my experience, intuition, imagination and passion into my work. I would like to think that the same muse helped me as the great Leonardo. I hope that my "Mona Lisa" will be accepted by fans of the original painting. "

According to famous researchers and restorers, the numerous visible changes in the "Mona Lisa" that have occurred over five centuries are due to the following factors:

To understand these and other factors, Genes Cortes relied on the results of laboratory studies of French restorers. A generalization of the historical, scientific material and the artist’s own experience allowed the following conclusions to be drawn:

2. Other pigments underwent a slight color change. To understand how they changed, a special analysis was carried out.

3. The surface of the picture has many cracks that formed, primarily as a result of a large number of movements, as well as under the influence of moisture on the wooden base.

4. Some details were destroyed due to intensive cleaning of the surface of the painting during reconstruction. For example, in the shadow area between the bridge of the nose and the right eye, as well as on the chin, a finer sketch of the details was lost. There are inexplicable traces of white paint above the upper edge of the corsage, which convinced Cortes that the delicate white finish of the bodice was present on the original, especially since this detail is quite noticeable on the Italian copy of the painting. Note that the version of "Mona Lisa", owned by the Prado Museum, was made by an unknown artist, a contemporary of Leonardo and, very likely, accurately conveys the original.

5. The copy from the Prado Museum also shows glare in the eyes, although they are not visible on the original. However, Giorgio Vasari, who made the earliest description of “Mona Lisa” from all known, in his book “Biographies of the Most Outstanding Painters, Sculptors and Architects” dated 1550, noted that the woman’s look in the picture has a “watery sheen”. Cortes brought back the sparkle in the eyes of the Mona Lisa.

6. Today, the picture has a fairly monotonous appearance, most likely due to the fact that Leonardo made extensive use of volatile, organic pigments in a thin glaze. The analysis showed a more vivid modeling of the face and hands, and the same Vasari describes both “rainbow and tender” nostrils, and “red lips”, and brighter skin tones that accurately convey the color of the flesh. Indeed, some red pigments made from the bodies and secretions of insects were widely used during the Renaissance, but often lost their color over time.

7. The sleeves of the dress, which now have a bronze color, may have been red (as seen in the copy from the Prado Museum).

8. The legendary mysterious expression on Mona Lisa’s face is greatly facilitated by the absence of eyebrows. Genes Cortes raised her eyebrows slightly, because it is known that they were, although very thin. Vasari also impressed their subtlety, which he noted in his book. Cortez reacted very delicately to this part of the picture, without speculating on the arch, the size and color of the eyebrows, feeling that any misunderstanding on her part would unconditionally change the woman’s usual expression on our face, and therefore, would distort Leonardo’s intention.

9. Lisa’s hair, which today seems almost black, was probably a warm chestnut shade, but turned black with time under a varnish that changed its color.

10. Over the entire area of ​​the picture, small details are painted that now hide under the old varnish, but whose traces are noticeable when applying innovative visualization methods.

11. In her work, Cortes used many light shades, but did not completely abandon the dark effects of chiaroscuro, believing that Leonardo deliberately used them in this picture (as he did in others) to achieve the effect of drama and mystery. Although the blackening of the varnish undoubtedly intensified the shadows, a study of Leonardo da Vinci’s work makes it clear how much he appreciated the effects of soft, theatrical light and deep shadows. 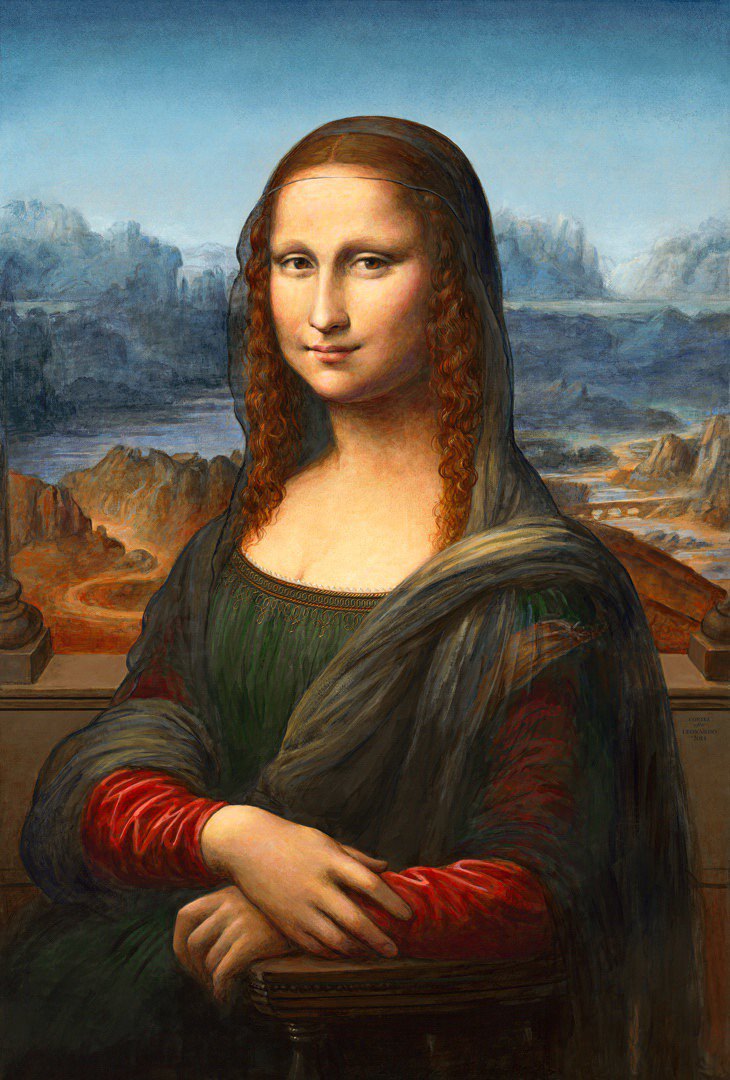