The Louvre has adjusted the creation date of Mona Lisa

The experts Louvre Museum substantially revised the creation date of the "Mona Lisa": Leonardo da Vinci he worked on his legendary canvas for ten years more than previously thought.

According to information The art newspaper, The Louvre has confirmed the information on the change in the date of creation of the painting "Mona Lisa." Recall that until recently, the famous portrait dated back to 1503-06, however, now official data state the time of work on the canvas as 1503-19gg. These important changes have already been made to the catalog of the Louvre exhibition “Saint Anne, the last masterpiece of Leonardo da Vinci” (Saint Anne, Leonardo da Vinci’s Ultimate Masterpiece), which will be held from March 29 to June 25.

Changes were received during the research work of the Louvre on Leonardo. A study of the copy of Saint Anna with the Madonna and Child Christ from the Louvre and the copy of Mona Lisa from Prado showed that the paintings were painted at the same time and completed shortly before the artist’s death in France in 1519.

Partially evidence provided copy of the Prado . Recall that the landscape on the background (both on the original and on the copy) of Mona Lisa is partially built on a composition from the Royal Collection dated 1515-20 years (it is exhibited in the Louvre along with 21 other pieces of art). 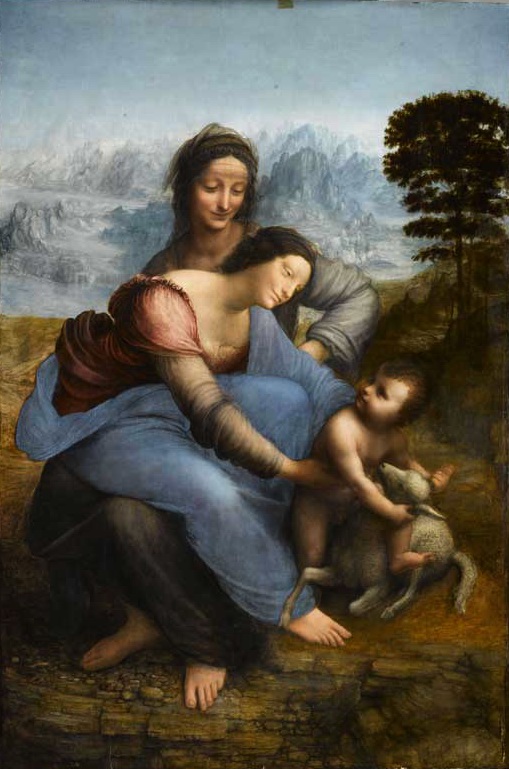 Leonardo da Vinci - St. Anna with the Madonna and Child Christ, after restoration

The Louvre exhibition marks the end of the restoration of the painting "Saint Anna with the Madonna and Child Christ." The restoration was sponsored by Barry Lam, president of Taiwanese Quanta Computer and a collector of Chinese painting. The back of the panel, the drawings on which were discovered 4 years ago, was first exhibited at the exhibition.

The original “Mona Lisa” is posted in the ever-popular hall among the main galleries and is equipped with a new plate with a revised date of creation. A copy of the painting in Prado, which is part of the exposition of St. Anna, was provided to a group of researchers for a couple of hours so that they could directly work on the canvas. The copy turned out to be more informative than the original, in particular, the Prado version depicts several towns on top of the hills that are not visible on the original.