A photo dated April 5, 2005 shows visitors to the museum. The louvre museum , in Paris, admiring the canvas "Mona Lisa" by Leonardo da Vinci. On April 5, 2011, Italian researchers unveiled a plan to exhume the remains of a Florentine monastery, hoping to identify a woman who had long been considered a model for Mona Lisa. Scientists believe that the project will help answer questions and uncover the secrets surrounding the masterpiece Leonardo da Vinci , including the fact that a woman by the name of Lisa Gerardini posed for this painting. The beginning of excavations at the monastery of St. Ursula in central Florence is scheduled for late April. 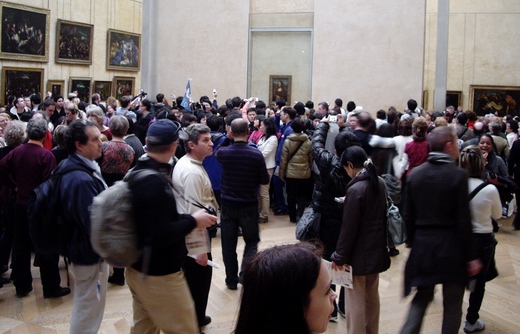 On Tuesday, Italian researchers said they were exhuming the remains in a Florentine monastery in order to try to identify a woman of the Renaissance, who had long been considered a model for Mona Lisa.

If everything goes well, researchers will be able to uncover the secret that has occupied scientists and art connoisseurs for centuries and find out who the woman depicted in Leonardo da Vinci’s masterpiece was.

The goal of the project, which began on Tuesday, is to find the remains of Lisa Gerardini, the wife of a wealthy silk merchant named Francesco del Giocondo.

By tradition, the name of Gerardini is firmly associated with the canvas, which in Italian is also called "La Gioconda" (Gioconda), and in French - "La Joconde". Giorgio Vasari, a sixteenth-century artist and author of the biography of Leonardo, wrote that da Vinci painted a portrait of Giocondo’s wife.

Gerardini was born in 1479. A few years ago, an Italian amateur historian said that he had found a death certificate, according to which she died on July 15, 1542, and the monastery of St. Ursula in central Florence became her tomb.

It is there, according to Silvano Vincheti, an art historian and project head, excavations will begin next month. Vincheti also cited documents from which it follows that the Giocondo family made generous donations to the monastery, and noted that Giocondo agreed to keep his wife’s remains in the walls of the monastery.

The project is part of modern research in the field of art history, in particular, discoveries regarding the author’s technique, in the discovery of details hidden on the canvas or even in studies relating to the life or death of an artist. The group, led by Vincheti, has already reconstructed the faces of some Italian artists from their skulls. Last year, they identified the remains of Caravaggio and established the possible causes of his death - 400 years ago, the artist died under mysterious circumstances.

Such studies are critical, and some experts openly express doubts, arguing that an analysis of the remains dating back hundreds of years may be the basis for a serious conclusion. Other scholars believe that such scientific techniques have almost no significance for whether people will admire the artist’s skill.

Vincheti studied Mona Lisa for many months. He claims to have found hidden symbols in a painting in the Paris Louvre. He claims that this work is not a physical portrait of one model, but an eclectic result. A little earlier Vincheti spoke about the results of his research, during which in the Mona Lisa he discovered the features of a man who was allegedly the lover of Leonardo da Vinci - Salaia . “Gerardini could have been an earlier model,” notes Vincheti, “and then a sitter, apprentice, companion and, possibly, Leonardo’s lover could take her place.”

“We can put an end to centuries of controversy, as well as understand Leonardo’s attitude to his models,” Vincheti reports to the Associated Press. “For him, fine art also involved a demonstration of a person’s inner traits and inclinations.”

The Mona Lisa project uses the same techniques used in the investigation regarding Caravaggio. Researchers will first search for graves hidden in the monastery with a radar capable of detecting objects underground. Then they will look for the remains that correspond to information about Gerardini, that is, related to a woman who died at the age of about sixty years in the indicated period of time. The group will also look for special signs, such as traces of possible diseases or bone structure, in order to make sure that it is really Gerardini.

If such remains are found, the researchers will also conduct a radiocarbon determination and extract DNA that can be compared with the remains of Gerardini’s children, some of whom are buried in the Florentine basilica.

And, finally, if fragments of the skull are found, depending on how well they are preserved, the group may make up a face reconstruction. This step will be decisive in finding out if Gerardini really posed for Mona Lisa and was the owner of a famous smile.