Rome, Associated Press. Silvano Vinceti, a historian studying art, gave a press conference in Rome on February 2, at which he presented the results of his detailed study of Mona Lisa Leonardo da Vinci . Vincheti claims that Leonardo da Vinci’s pupil, Jean Giacomo Caprotti, known as Gian Giacomo Caprotti, Salai, who had been with Leonardo for many years since the 1490s, was the model for this painting. 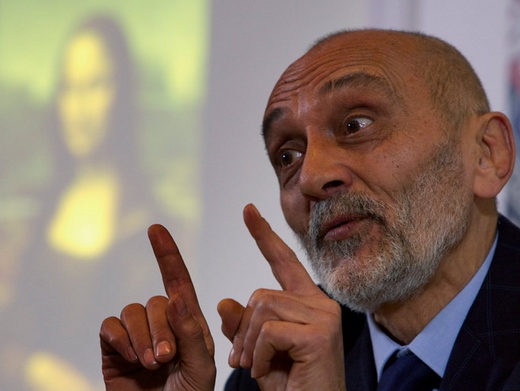 Silvano Vincheti at a presentation in Rome on February 2, 2011
AP Photo / Andrew Medichini

Vincheti said that “Mona Lisa” should not be considered as just a portrait. This picture is the embodiment of all scientific, creative and philosophical representations of Leonardo. For quite some time, Leonardo left and again returned to writing it. During these periods of time, Leonardo was influenced by various people, events and other sources of inspiration, as a result of which the canvas is saturated with many hidden meanings.

Vincheti’s theory is not the only one among various opinions regarding the origin of Mona Lisa and, mainly, the riddles of her mesmerizing smile. There are other theories, the most popular of which adheres to the assumption that the Mona Lisa is a self-portrait of Leonardo. Another, relatively new theory popular in academia is that the painting depicts Lisa Gherardini, wife of the Florentine merchant Francesco del Giocondo.

Jean Giacomo Caprotti, a student of Leonardo, who worked with him for more than 20 years, most likely was a lover of Leonardo. Most historians agree with this assumption.

At a press conference, Vincheti noted that Salai is present in several paintings by Leonardo, for example in the painting “St. John the Baptist ”(St. John the Baptist) or in the not very well-known figure“ Angel of the Incarnation ”(Angel Incarnate), in the form of a effeminate young man with long brown hair. Vincheti noted the striking similarity of his facial features, especially nose and mouth, with “Mona Lisa”, but did not exclude the possibility that Lisa Gerardini still had some influence on Leonardo in the initial stages of the creation of “Mona Lisa”. Silvano Vincheti also suggested that later on the image of the mysteriously smiling “Mona Lisa” could be influenced by the noblewoman Beatrice D’Este, wife of the Duke of Milan Ludovico Sforza, for whom Leonardo worked at the end of the 15th century. At that time, Leonardo was engaged in his monumental creation "The Last Supper" for the convent of Santa Maria delle Grazie in Milan.

“Salai was Leonardo’s favorite model, and he certainly inserted many of his features into the portrait of Mona Lisa,” said Vincheti. However, this is not the first association of Salaya with Mona Lisa, and some scholars-historians are skeptical about this version. For example, expert on Leonardo da Vinci - Pietro Marani (Pietro Marani) considers the theory of Vincheti unfounded.

By the way, most historians are of the opinion that Leonardo began work on the “Mona Lisa” upon his return from Milan, in 1503. However, Vincheti believes that this could happen earlier, in the late 1490s, back in Milan.