Recently it became known that fate the lost fresco of Leonardo da Vinci “The Battle of Angiari” will remain unknown. 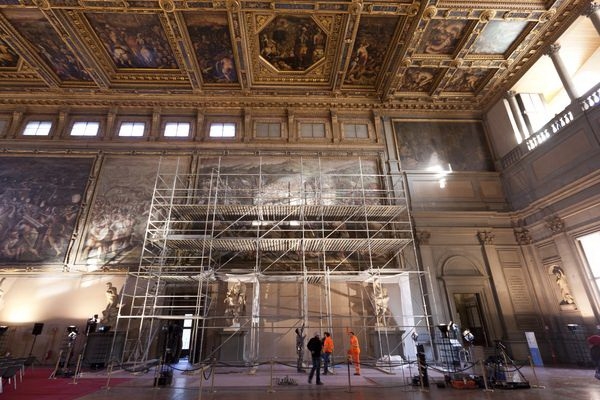 An ambitious project to find work that was considered lost was suspended indefinitely, and scaffolding erected in the Palazzo Vecchio will be dismantled at the end of September. In total, for more than ten months, the research team tried to find a mural under the arches of the former building of the Florentine Council.

In order to minimize damage to the Vasari fresco, seven areas were selected, already damaged by time, or already undergoing restoration, where the Italian Ministry of Culture allowed to work.

Described by the Mayor of Florence as the “great mystery of the Renaissance,” the “Battle of Angyari” was conceived in 1503, when Leonardo and Michelangelo received an order to paint two murals on the theme of the historic Florentine victory on the opposite walls of the Palazzo Vecchio. On June 6, 1505, at the age of 53, Leonardo began work on the central battle scene, known as the Battle of Cassina.

In his book, Vasari will mention that Leonardo abandoned the project due to technical problems associated with his experiments in mixing oil paints. Historians, however, question his conclusion. Some suggest that Vasari invented this story, and that the mural was actually completed. And ten years later, a fresco by Vasari himself was painted on this site. And, as historians assure, da Vinci’s fresco is not the only one that “disappeared” under Vasari’s brush.

In 1861, in the church of Santa Maria Novella, the Trinity fresco painted by Masaccio was found. The fresco was walled up (but not destroyed) by the same Vasari, who, on the orders of Duke Cosima I, painted on top of his "Madonna with the Rosary."

In 2000, at a conference dedicated to da Vinci, the idea was first expressed of the need to remove the Vasari fresco in the Palazzo Vecchio. And only in 2012 convincing facts were received about the possible existence of Leonardo’s masterpiece under the work of Vasari. However, the researchers could not advance far ahead. Continued work requires complex studies using XRD / XRF tomography, which are only possible with the European Center for Synchrotron and Radiological Radiation in Grenoble, France.

In this regard, a number of scientists defended the creation of Vasari. Cecilia Frosinini, painting director at the Opificio Art Restoration Laboratory, immediately resigned in protest at the continuation of the work. “This is an ethical issue. I must protect the work of art from destruction, ”said Frosinini.

After her reaction, many art historians signed a petition demanding to stop further drilling of the mural, some began to question the very existence of Leonardo’s work under it.

“Vasari would never have destroyed the work of the artist whom he admired so much. This whole story is good for Dan Brown, but not for art historians, ”said Tomaso Montanari, art historian at the University of Federico II in Naples.

Cristina Acidini, superintendent of Polo Museale Fiorentino, in response to a request from a group of researchers, allowed the endoscopic examination of the seventh hole, but excluded the possibility of further drilling. Such a decision caused a fierce debate in interested circles. But no matter what, a few days ago the final decision of the Italian Ministry of Culture came about the need to fill up the holes in the Vasari fresco and dismantle the scaffolding. So ended the search for the mysterious work of Leonardo da Vinci.