Portrait of Isabella d’Este attributed to the brush Leonardo da Vinci , found in a private Swiss collection. According to experts, the woman in the picture has the same mysterious smile as Mona Lisa, and the painting itself is painted with the same pigment and has the same primer as in the paintings of the great master. 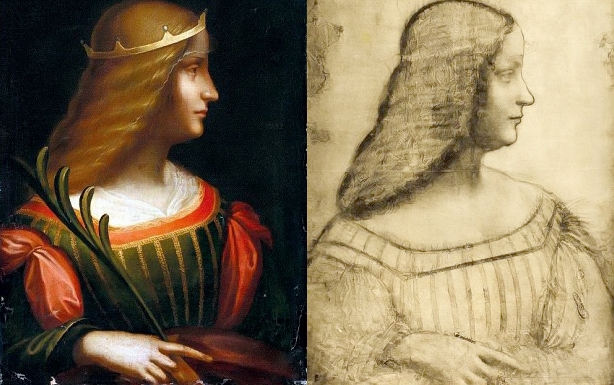 Researchers from Italy discovered the painting, and identified the heroine of the portrait - a noblewoman who lived during the time of Leonardo. The existence of the picture was known before, but it was considered lost for more than 500 years.

A portrait of Isabella d’Este, which, according to a radiocarbon study, was painted around the beginning of the 16th century, was found in a private collection repository in Switzerland, and the work was identified by leading Renaissance specialist Carlo Pedretti.

“I have absolutely no doubt that the portrait is Leonardo’s work,” says Carlo Pedretti, professor emeritus of art history at the University of California.

If the picture is recognized as genuine, and if all experts agree that the painting was painted before Mona Lisa, then this discovery will significantly shake the academic research of one of the most famous paintings in the world.

A portrait of 61 cm by 46.5 cm, which uses the same pigment in paints and the primer that Leonardo used, is a full version of the sketch made by the artist and stored, like Mona Lisa, in the Louvre in Paris.

The family that owned the portrait and wished to remain incognito herself asked the experts to analyze the collection, consisting of more than 400 paintings, collected by family members from the beginning of the 20th century.

In a letter addressed to the owners, Pedretti said that he was convinced that Leonardo painted the face of the heroine of the portrait, and his two assistants dealt with palm leaves and the object that Isabella d’Este holds in his hand.

Leonardo first met the Marquise d’Este when he settled at her court in Mantua in 1499. The patroness of the arts and a leading figure in the Italian Renaissance, whose dressing ability made her one of the most influential women in Italy and France, posed for the artist and then begged him in letters to turn her sketch into a final picture.

Leonardo promised to complete the work, being already in another place, suggesting that he would work on a sketch. In 1514, they probably met again at the Vatican, but historians claim that the painting was either never completed or lost forever.

The only historical clue that indirectly confirms the completion of the painting is great by the painter, is the story that happened in 1517. Then, while in France, Leonardo showed a series of his paintings to Cardinal Luigi d’Aragona, while an assistant clergyman was present, who later wrote: “There was a portrait painted in oil, depicting a certain lady from Lombardy.”

Pedretti said that after studying the portrait for more than three years, he decided to devote the public to his conclusions, although he needed a few more months to finally figure out which parts of the painting were done by Leonardo’s aides.