Van Gogh’s “Sunflowers” ​​can be restored to their original color

AMSTERDAM. The stellar attraction of the Van Gogh Museum in Amsterdam (Amsterdam’s Van Gogh Museum) suffers from discoloration of paints and a layer of varnish added in later years. By decision of the museum’s management, the painting was removed from the exhibition, and restorers are currently deciding how to recreate the original colors of the canvas. Experts have to decide whether it is possible to remove the varnish layer from the picture, which will not only allow more accurate determination of the initial colors, but will also make the picture more convenient for perception. 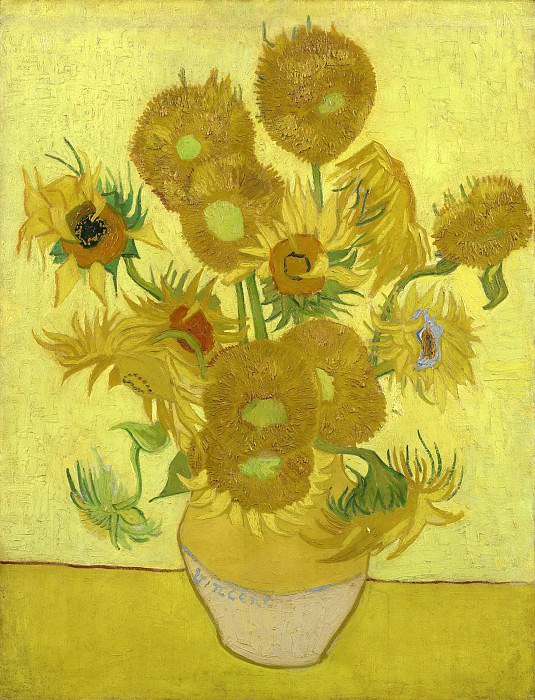 Amsterdam "Sunflowers" were painted in a yellow house in Arles, in January 1889, a month after Van Gogh mutilated his ear. The painting, as art critics believe, was written for Gauguin, although he never received it. This is a signed copy of the original version, made five months earlier, which is now stored in the National Gallery in London (National Gallery in London). Van Gogh wrote five more still lifes with sunflowers, today they are in Tokyo, Philadelphia, Munich, one in a private collection, another was destroyed during the Second World War.

The key question that concerns experts is whether it is possible to remove varnish from a picture without damaging it. Van Gogh did not varnish his work, preferring a matte surface. Lacquer coating was probably added in 1927 to protect the canvas. Over the years, the varnish has acquired a brown tint, which dulls the perception of the original colors used by the artist. Another problem of concern to restorers is the destruction of yellow pigments, which have darkened and acquired a slightly greenish-brown tint as a result of photochemical reactions. Restorers believe that before covering the painting with varnish, an unknown artist added a few strokes on it: the orange shades are slightly different from the original ocher used by Van Gogh.

Van Gogh himself knew that pigments could break down over time. “The paintings fade like flowers,” he wrote to his brother Theo. In a painting written in Arles, Van Gogh made several changes compared to the original: he added a bluish center to one of the flowers and reddish to the other. From the point of view of botany, these colors were used incorrectly and added, apparently, to enhance the artistic effect. These areas are currently being studied more closely in order to determine the degree of change in pigments.

Experts also study a wood panel, 3 cm wide, which was added at the top of the canvas to increase the size of the painting. The panel is clearly visible and even depicted on quality reproductions. It was probably added by Van Gogh himself to create more space around the flowers.

The “Sunflowers,” which are today stored in Amsterdam, were originally from the stepsister of Vincent Van Gogh Joe, and later from her son. During World War II, the painting was evacuated to a bunker in the sand dunes on the Dutch coast. From 1946 to 1973, "Sunflowers" were exhibited at least 79 exhibitions around the world. The painting was later donated by the Van Gogh Family Foundation to the Van Gogh Museum in Amsterdam. Due to its value and significance, today the picture rarely travels to cities and museums. In 2014, at the National Gallery in London, the canvas was exhibited paired with the first version of "Sunflowers".

According to the representative of the museum, any risks of interference will be carefully assessed by experts before the restoration. The main goal of the upcoming work is to preserve the picture in the best possible way for future generations.